Rod Little should be treated exactly the same as David Starkey.

It was only last month (June 2020 ) that after years of making deliberately offensive and reveling the title of the most offensive man in Britain that after remarks during a podcast interview,David Starkey was finally brought to book.


He had stated that "Slavery was not genocide" because "so many damn blacks" survived. Following these comments, he resigned or was fired from fellowships and other senior positions at Fitzwilliam College, Cambridge University, Canterbury Christ Church University, the Mary Rose Trust board of trustees, History Today editorial board, his fellowships of the Royal Historical Society and Society of Antiquaries of London,[8] his present book deal and also his previous book publisher, withdrawal of the Medlicott Medal awarded to him by the Historical Association, and the universities of Lancaster and Kent[] both opened formal reviews of his honorary graduate status. Starkey later issued an apology for his comment, stating: “It was intended to emphasise, in hindsight with awful clumsiness, the numbers who survived the horrors of the slave trade. Instead, it came across as a term of racial abuse..... I am very sorry for it and I apologise unreservedly for the offence it caused".


Like Starkey Sunday Times columnist revels in accusation s of racism and misogyny and  included in these are attacks on the Welsh and Cymraeg , for which the UK Liberal media fail to call him out ,
tWO YEARS AGO  LIDDLE  columnist condemned for his comments about Wales and the Welsh language has devoted a column to attacking his critics.

Former Radio 4 Today programme editor Rod Liddle has used his Spectator column column to defend his article in the Sunday Times which he attacked people who opposed the renaming of the second Severn Crossing as the Prince of Wales Bridge , saying they “would prefer it to be called something indecipherable with no real vowels, such as Ysgythysgymlngwchgwch Bryggy”. 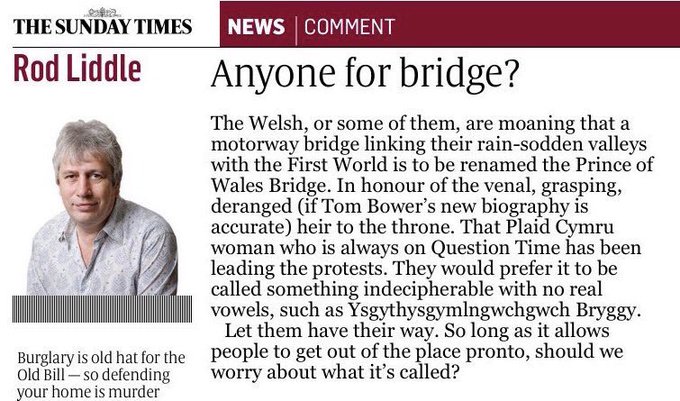 On Sunday  Liddle  was at it again said that the language was “full of aspirates” and that “one verse of Sosban Fach you could wipe out half of Pontypool”.

He was reacting to news that choirs were being discouraged from meeting to sing together in Wales after evidence that vocalising helped spread Covid-19.

“Singing exacerbates the spread of the virus, apparently,” he said.

“Luckily eating seaweed and burning down people’s homes are OK, I think,” he said. “Welsh is, I suppose, a very expressive language, full of aspirates.

If we can no longer tolerate David Starkey  after his appalling   "so many damn blacks" survived statement and years of ssuch offensive behaviour we should no longer tolerate the likes of Rod Little making such remarks about Cymraeg.

If there is a difference I can't see it and Liddle should be sacked  and hopefuly sent like Starkeyinto obscurity.