Those who support a Republic should refuse to take Oath of Allegiance.


This Blog has often called for an end to the Oath of Allegiance and the recent events that Mrs Windsor agreed to Boris Johnson's "request" that she prorogue parliament to my mind means that she has broken the contract that she has with the people.

It is true that Prime Minister Johnson has laced her in this position even if she refused, but she has agreed to close our elected and unelected(HOL) legislatures at Westminster a move not taken since her predecessor Charles 1 prompted a Civil War by doing so albeit for a longer period.

By doing so she has has arguably removed any obstacle to MPs refusing to take the Oath of Allegiance.


I... swear by Almighty God that I will be faithful and bear true allegiance to Her Majesty Queen Elizabeth, her heirs and successors, according to law. So help me God.

Members who object to swearing the oath are permitted to make a solemn affirmation under the terms of the Oaths Act 1978:


I... do solemnly, sincerely and truly declare and affirm that I will be faithful and bear true allegiance to Her Majesty Queen Elizabeth, her heirs and successors, according to law.

Imagine if a large number of candidates standing in the next election announced that if elected they would refuse to swear allegiance to the current Head of State but even more so her heirs and successors.

If they were honest then maybe 60- 100 could do so and be not allowed to take their seats.

There is a sort of precedent . The National Secular Society, founded in 1866 by politician Charles Bradlaugh, spearheaded the advocacy for freeing citizens from absolute government requirements involving religious observances; the Leicester Secular Society was founded in 1851. Bradlaugh's 1880 election to Parliament brought on a decade-long dispute over the demanded right to affirm declarations of office rather than swear oaths, as he was denied his seat for five years by a ruling that he had no right to affirm and resolutions preventing him from swearing an oath. When Bradlaugh was ultimately admitted in 1886, he took up the issue and saw the Oaths Act 1888 passed, which confirmed the right to optionally affirm declarations for inaugurations to office and offering testimony to government bodies.[

If this was to be repeated with a large number of avowed republicans refusing to take the oath of allegiance , then surely it would be braking the Human Rights Act ?

One note of caution.


Advocacy of the replacement of the monarchy with a republic has been an imprisonable offence in law. The Treason Felony Act 1848 prohibits the advocacy of a republic in print. The penalty for such advocacy, even if the republic is to be set up by peaceful means, is lifetime imprisonment. This Act remains in force in the United Kingdom.[27] However, under the Human Rights Act 1998, the Law Lords have held that although the Treason Felony Act remains on the statute books it must be interpreted so as to be compatible with the Human Rights Act, and therefore no longer prohibits peaceful republican activity.

In part some supporters of Brexit would like to do away with the Human Rights Act and it , and it is that fraction who are in power in Westminster and it would come as no surprise if they would seek to abolish or replace it.

Indeed  this could be the last chance National Left has to advocate republic, before he is thrown in the tower . I wonder who would join me/
Posted by glynbeddau at 06:16 No comments:

The Lib Dem candidate Beatrice Wishart may have fought off a strong challenge from the SNP to hold Shetland in a Holyrood by-election.
However it was quite an achievement for the SNP to obtain a 14% swing despite being the incumbent government  in Holyrood  for over 12 years
She succeeds Tavish Scott, who had been MSP for the constituency since 1999 in what was Scotland's safest seat.
Ms Wishart polled 5,659 votes, ahead of SNP candidate Tom Wills on 3,827, a majority of 1,837.
The Lib Dems saw their majority more than halved from 4,895 in 2016 as the SNP benefitted from a 14.4% swing.
With 11,835 votes cast, the turnout was 66.5%, up from 62% in the 2016 Scottish Parliament election.

This was one of the safest seats in the  Scottish Parliament and clearly although they poured resources into but  they didn't win to achieve a 14.4% swing.in a seat , that has been been part of the Liberal stronghold of Orkney and Shetland  with only a few blips since we had any form of universal franchise.

Ms Wishart said she was honoured "to make a little bit of history by becoming the first female parliamentarian in Shetland" after a "roller-coaster" campaign.
"Shetland has once again rejected Scottish nationalism and shown that it has not been taken in by the bullying tactics," she said.
"My work will start on Monday to get the Scottish government to take action on its empty promises for fair ferry funding, to improve nursery provision, mental health care, broadband - the key strands of my positive campaign for Shetland."
I am not sure what she means by broadband as its not a devolved issue in my understanding.
Not sure about positive campaign as well
Lib Dem  MSP Alex Cole-Hamilton was criticised for a tweet about a conversation between SNP youth activists which he "overheard" in Lerwick.

The Edinburgh Western MSP posted: "Overheard conversation yesterday in Lerwick: @theSNP youth activists out canvassing, resting on a wall and looking at 3 blocks of flats. 'F this, can’t be bothered, let’s just mark them all as SNP and head back the office.' Memo to SNP: don’t rely on your data #Shetland".

Overheard conversation yesterday in Lerwick: @theSNP youth activists out canvassing, resting on a wall and looking at 3 blocks of flats.

“F this, can’t be bothered, let’s just mark them all as SNP and head back the office.”

Memo to SNP: don’t rely on your data


In response, SNP staffer Chris Jones called the post an "awful smear" and said the activists weren't in Lerwick yesterday.


The Holyrood by-election was sparked by the resignation of Mr Scott, who quit politics in July to take a job with Scottish Rugby.

Mr Scott, a former leader of the Scottish Lib Dems, had held the seat since the creation of the Scottish Parliament in 1999.
Finally the poor old conservative saw his main plank taken away from him when his leader resigned on the day of the elction 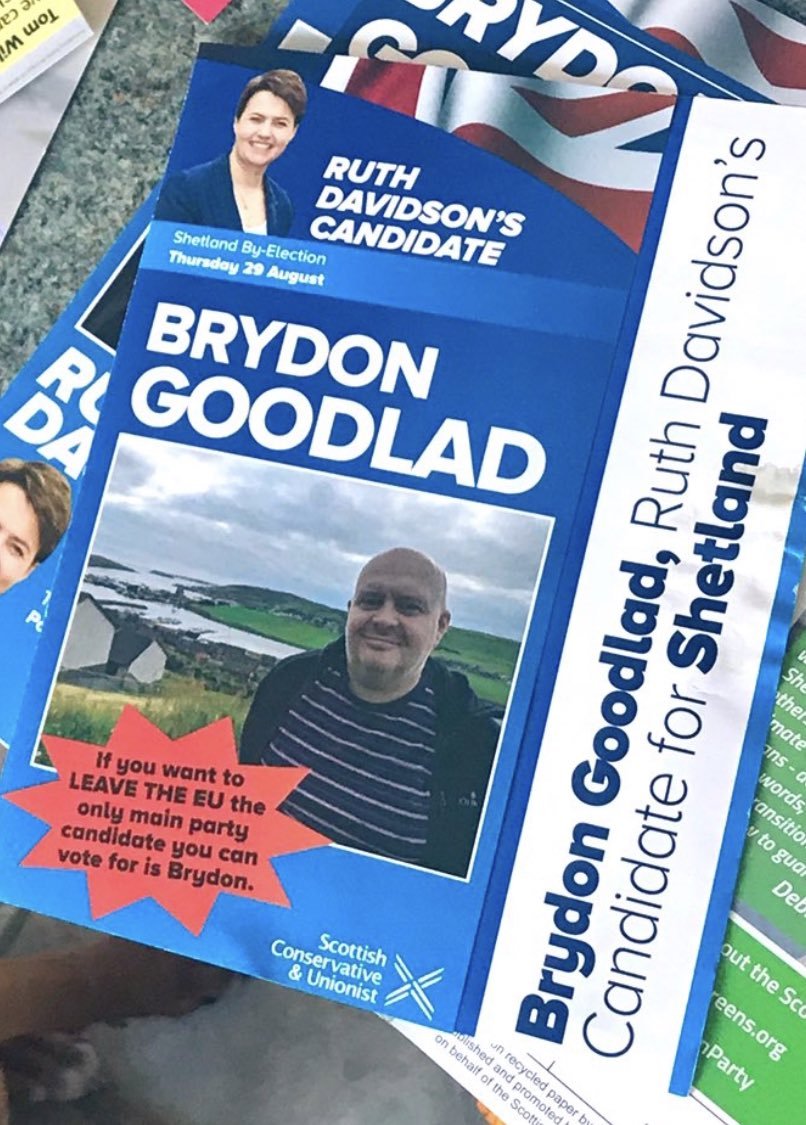 Stil at least it didn't have Boris Johnson on it.

“Ankh-Morpork had dallied with many forms of government and had ended up with that form of democracy known as One Man, One Vote. The Patrician was the Man; he had the Vote.”


Those who claim that yesterdays  events  saw the death of democracy in the UK  are wrong , we do not  live in a democracy but in a state which pretends to enfranchise the people , whilst making sure that it is either ignored or prevented from knowing the truth.

The report by the social mobility think-tank found 29 per cent of MPs in 2017’s Parliament were privately educated, while 18 per cent attended grammar schools.

While the figures reveal undeniable progress in equal opportunities, the report also found one in ten MPs had attended Eton, one of the UK’s most exclusive public schools.
Conservative MPs were disproportionately privately educated, with 45 per cent attending private schools, compared to 14 per cent of their Labour counterparts.

The data found 86 per cent of MPs to be university graduates, with 23 per cent attending Oxford or Cambridge.

It also means for those living in parts of the country where one party is dominant  then if they do not support that party it actually means that voting in a General Election means nothing.
Even in marginal seats you may be forced to abandon your prefered party for another . Under  proportional representation you can at least o some degree se your vote count even if it is your second choice.

Various newspapers, organisations and individuals endorsed parties for the 2015 election, nearly al for the Tories or Non-Labour

Who can forget  this the day after the 1992 election. 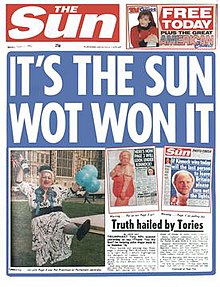 However  it is the daily right wing rhetoric  from the media which endorses xenophobia, racists  and  simply lie without impunity

Posted by glynbeddau at 06:47 No comments: