Why are we being treated as Second Class UK Citizens?

Two stories this week show that Wales  is a second class part of the Union.

Firstly we here  Santander refused to process Cymdeithas yr Iaith’s membership forms after they were handed in at the branch in Aberystwyth.


An official from Santander, which operates in more than 20 countries where English is not the main language, wrote a note to the group after the bank refused to set up membership payments for three people.
The note said: 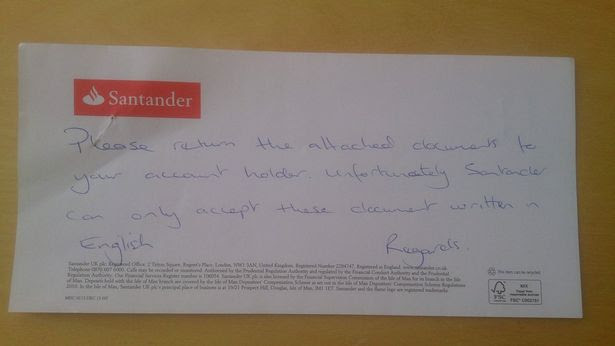 “This is another example of a private company refusing to provide a Welsh language service because they’re not required to do so, and that’s completely unacceptable.“We must have a language law which ensures that banks have to respect basic rights to use the Welsh language.“Unfortunately, the Welsh Government’s plans for new legislation make it less likely that banks will have to comply.“The vast majority of people have to bank, but there is no means of banking online in Welsh, and we have to fight for other basic services in Welsh.”

A spokesman for Santander said:

“Santander accepts documentation that we receive in Welsh, in line with our Welsh Language Policy.“We understand our customers who live in Wales may have various documentation and forms that will be written in Welsh.
“If our policy has not been followed then we apologise for any unintentional upset this matter may have caused.
“The matter will be reviewed to ensure this does not happen again.
“We are consulting with the Welsh Language Commission and will remind relevant colleagues of our policy to ensure that we continue supporting our Welsh communities in the best possible way.”

So that's alright then except that this should never happen and its high time the Welsh Assembly should act on this.

In a recent white paper,  Alun Davies, Welsh Government minister for the Welsh language refused to commit to extending Welsh language rights to the banking sector because of the “present economic uncertainty”.

Well maybe he should reconsider

But it's not only Cymraeg that is being treated as second class but out accademic qualifications as well.

The BBC reports that

A Welsh RAF applicant was asked to take an English test despite holding a GCSE in the subject.
Defence Minister Tobias Ellwood said Wales-only qualifications had not been seen as acceptable qualifications under English apprenticeships guidelines.
Former Welsh Secretary Stephen Crabb said it was "demeaning" for Welsh applicants to be asked to take additional qualifications.
Mr Ellwood said the guidance had since been revised.
Preseli Pembrokeshire MP Mr Crabb wrote to the minister after a constituent's son had to undertake an English assessment during a pre-recruit training course at RAF Halton, Buckinghamshire.
This was required even though he already held a Wales-only English GCSE from the WJEC exam board.
The MP said he was aware of several instances where this had happened.

"There should be no discrimination between GCSEs from England and the devolved nations - especially in our Armed Forces which recruit heavily from Wales and Scotland,"

In a letter to Mr Crabb, the defence minister said the English and maths qualifications required by RAF entrants are determined by apprenticeships the individual will undertake after graduating - with the criteria regulated by the Specification of Apprenticeships Standards for Education (SASE).
Mr Ellwood said guidelines at the time "stated that qualifications exclusive to Scotland, Ireland or Wales were excluded", and that the GCSE did not correspond to examples of acceptable evidence.
He said,

"It was on these grounds that [the applicant] was required to undertake the functional skills literacy [assessment] during the pre-recruit training course."

Mr Ellwood added that the SASE had since been updated with an extended list of acceptable English and Maths qualifications, including some Welsh qualifications that were not previously included.
An RAF spokesman said: "Individuals entering the RAF to complete an apprenticeship are required to meet the standards set by SASE.

"Following a recent Ministerial enquiry, the RAF is seeking guidance to confirm if the WJEC GCSE English Language (Wales) qualification is acceptable for apprenticeships."

Its almost as if the RAF look at Welsh recruits as if they were part of a colonial contingent, maybe even only suitable for the lower ranks to be led by English educated officers?

How long has the RAF being  treated Welsh and other Non-English applicants applicants this way?
Posted by glynbeddau at 06:30 5 comments:

The BBC are "getting their retaliation in first

I have no doubt that the BBC may have received some threats to their Political Journalist  Laura Kuenssberg  but should that prevent reasonable people from questioning  thier impartiality?

The Evening Standard  claim that

The BBC’s Laura Kuenssberg has been subjected to yet more vile abuse by internet trolls accusing her of “playing the victim” after it emerged she has been assigned a bodyguard for protection.
The corporation's political editor was assigned a guard for Labour conference after an 18-month campaign of abuse by online critics.
And while some said the news marked a new low for trolls who target high-profile people on social media, others launched yet more attacks on Kuenssberg.
Some even accused her of making the story up to get attention, while others said she deserved the abuse.

One troll described the story as “manufactured drama” and another wrote: “It's utter rubbish. She's not being threatened by anyone. Yet another Tory biased @BBCNews stunt.”
“It looks very much like the BBC trying to play up her victim status and employ obvious bodyguards (and then run a news story about it) so they can look all self-righteous,” wrote another.
“It's just not believable that Kuenssberg would actually be in physical danger there.”
Other critics of the BBC journalist have gone as far as to suggest she deserves threats of violence because of her “bias” reporting and “lies”.
But if you receive the above Tweets most of them seem to be accepting the threats but  still questioning  Kuenssberg's claim to impartiality.
The BBC's Nick Robinson (a former chair of the Oxford University Conservative Association) and who received a great deal of criticism over his coverage of the Scotish Independence Referendum where he was accused of lying. has also  tried to discredit independent media by saying that criticism of the BBC is so persistent that it's negatively affecting public perceptions of mainstream media, and also accused independent media of living in a "social media bubble".
This from 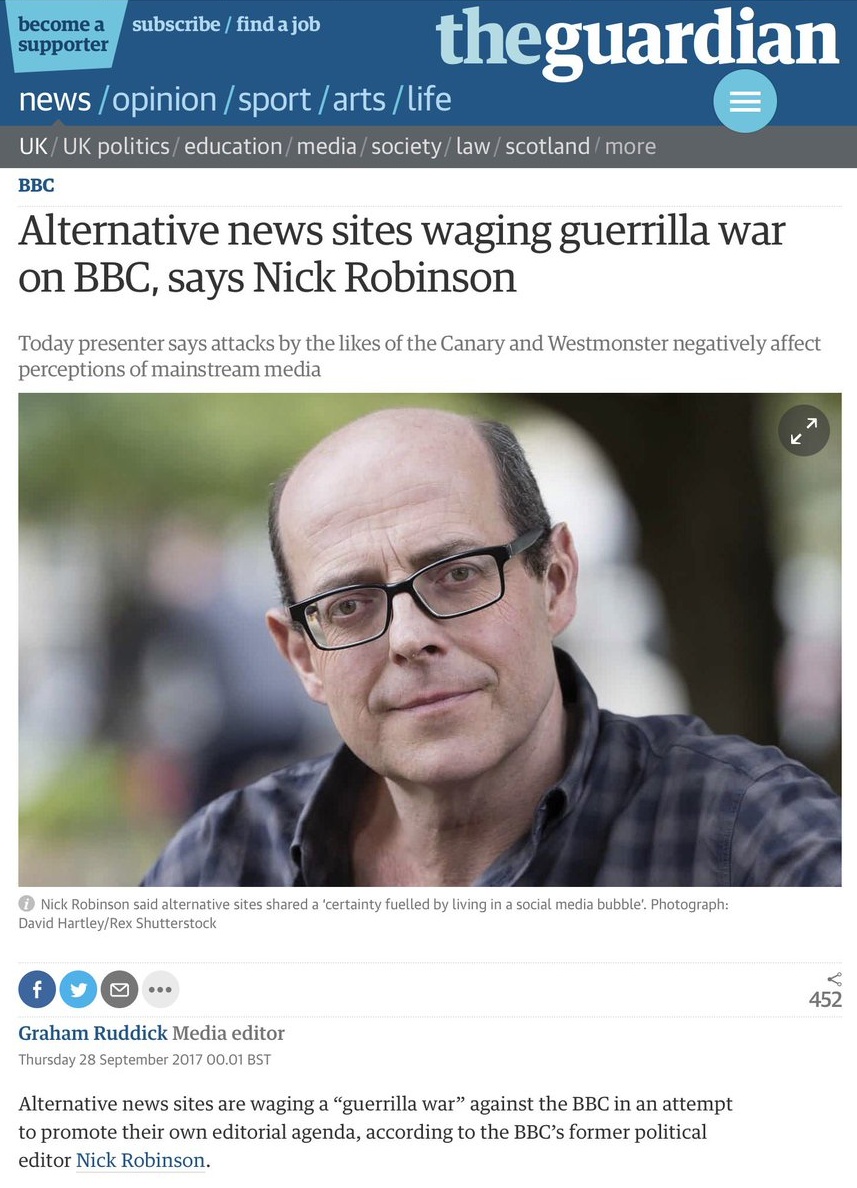 It seems that the BBC are "getting their retaliation in first" as the Party conference season continues  and that they intend to portray  any criticism however well argued as Trolls,
Indeed i find it strange that members of the public can be vilified in the same  for attacking Politicians and main stream journalist . Whilst the SUN, Mail and Express can use language that many of us who do comment would avoid.
We need to ensure that Social Media commentators  should behave appropriately but tarring all with same brush, serve the  establishments agenda and that only they can lie and make abusive comments without facing any consequences.

Posted by glynbeddau at 07:00 No comments:

After the  Howard League for Prison Reform, said Wales was becoming like Botany Bay in Australia where British convicts were shipped in the 18th and 19th Century.(I have already made the connection mind) and Wales will be in danger of being seen as a penal colony for England if a new super-prison,
Comes news that
Plans to dredge 300,000 tonnes of mud from near a disused nuclear plant and dump it off Cardiff Bay have been criticised.
A marine pollution expert claims the mud from near Hinkley Point in Somerset could expose people to radioactivity.
EDF Energy, the company behind the plans, said the work was not harmful to humans or the environment.
The Welsh Government said all applications were considered in line with legal requirements.
Dredging is proposed in Bridgwater Bay near the decommissioned Hinkley Point A and B as part of construction work for the new £19.6bn Hinkley Point C nuclear power station.
Welsh ministers granted permission in 2013 for developers to dispose of the sediment at a site know as Cardiff Grounds, previously used to deposit waste from Cardiff and Newport docks.
But independent marine pollution consultant Tim Deere-Jones, who specialises in marine radioactivity, claimed sampling of the mud to check for potentially harmful contaminants had been "inadequate".
He told BBC Wales low level waste from the nuclear plant had entered the site for more than 50 years and there was a lack of knowledge about the potential harm of moving the mud.

"Rather than being relatively stable at the Hinkley site it is being churned up and brought over here to be dumped," he said.
"Radioactive and non-radioactive pollutants will inevitably enter inshore waters and coastal environments.
"Several studies have shown that wastes dumped into the sea transfer to the land in sea spray and episodes of coastal flooding.
"As a result Welsh coastal populations could be exposed to doses of marine radioactivity."

Environment Secretary Lesley Griffiths said she was unable to comment on a process that had been carried out "some time ago", but added:

"All marine applications are considered in line with legal requirements.
"I understand a valid marine licence is in place and there are conditions that need to be complied with by the licence holder before any disposal can take place."

Its your bloody Job  to protect the Welsh Environment Ms Griffiths, not to come up with excuses . If there was a screw up "some time ago then do something about it.

Prisons we don't need or want , other peoples Toxic waste. Is that the sought of message the Welsh Government want to send out to potential investors to Wales?

Is this what Labour mean by "Standing up for Wales" more like lying down and letting people throw body waste at you?

PS we are faced with even more crap coming over the border as Wales online announces.


Katie Hopkins is booked to do talks in Welsh schools.