Could "Welsh" Labour split from the UK party

Could "Welsh" Labour split from the UK party if it backs a hard Brexit, ?
The idea has been muted by Leighton  Andrews, who lost his Rhondda Assembly seat to Plaid Cymru leader Leanne Wood, said there was “no question” that it should be ready to contemplate a divorce.
According to the  Wasting Mule he was alarmed by an article by Shadow Secretary of State for International Trade Barry Gardiner’s in which the Labour frontbencher argued that the UK must leave the single market and the customs union.
When asked if Welsh Labour should consider a divorce if UK Labour backed a hard Brexit, he told the BBC: “ Absolutely. No question.

“I honestly think that if the UK Labour Party cannot get itself together on this most fundamental of all issues, then I think Labour at a UK level will be in a very dire position. In that case, given the success of Welsh Labour, particularly at the most recent general election, in Assembly elections and the fact that Welsh Labour remains in Government, I think there was a very strong case at the beginning of the week for taking steps to protect Welsh Labour, its identity and its role.“Now, I think that over the course of the week we’ve seen UK Labour moving back towards the Welsh Labour position and I think that’s good news.”

When asked if a Labour split could result in two Labour parties competing in Wales, he said:

“Well, I don’t think that’s how it would play out and that’s not actually at the end of the day the outcome I want to see. What I actually want to see is a strong, clear-sighted Welsh Labour party that is influencing and providing direction for UK Labour.”

It assumes that even if there was a sufficient majority of "Welsh" Labour members opposed to an Hard Brexit , would just this issue be enough to see them splitting from the UK party and loosing the financial support it gets from it.

After all Brexit would probably still happen, and in five years time what would be the impetus  of a real Welsh Labour Party?

Certainly not a Federal Labour Party in a Federal UK, there may be currently a move for Carwyn Jones to work with Nicola Sturgeon

The two first ministers are alarmed at what could happen to their nations’ economies if the UK leaves the EU without a deal securing unfettered access to the single market.

Not only do they want to shape the negotiations, they are adamant that powers held today by Brussels in areas such as agriculture and fisheries should be returned to AMs and MSPs after Brexit and not held by MPs.
They are also unequivocal that Westminster ministers should not impose a replacement for the Common Agricultural Policy on the whole of the UK.
In the past the Welsh First Minister  has talked up the benefits of a move to a federal model for the UK and warned that the “days of parliamentary sovereignty are numbered”.
Yet he has done little to encourage his own party to even consider parity with Scotland and the "Welsh Leader" cannot even persuade Welsh Labour MPs  to back the recommendations of the Silk Commission on the devolution  of Policing , Criminal justice ,Water and Transport.
In the May General Election "Welsh"Labour tried to distance itself from the UK party in the mistaken belief (which lets be honest I and many shared) that Jeremy Corbyn  could not win and presented a Faux Nationalist agenda and the impression they would work together as a separate identity in the interest of Wales.
In the event it appears that it was Corbyn and the disastrous Tory campaign that saw Labour in Wales increase their  number of seats.
If "Welsh"  labour were to split from the UK party it will not be due to Brexit  it will be the growth of the YES Cymru campaign and a rise in the Polls of Plaid Cymru.
They will then whilst still backing the Union rehash their 2017 Faux Nationlism . Hopefully  by then it will be to late and Wales will be following Scotland to the exit.

I agree with the Welsh Tory leader.

According to Wales Online

The Tories have accused the Welsh Government of pushing ahead with the proposals without a finalised business plan.They say the scheme was announced as part of a “cynical ploy to reduce the impact of the Welsh Government’s decision not to back the Circuit of Wales”.

Last month Economy Secretary Ken Skates refused to grant £210m in guarantees for the proposed Circuit of Wales, a project which promised to bring the MotoGP to Ebbw Vale, claiming jobs claims were “overstated”.However, plans were unveiled to spend £100m over 10 years on an automotive business park.

Welsh Conservative leader Andrew RT Davies claims this is “yet another Labour promise waiting to be broken”.

He pointed to Mr Skates’ comment last month that “whatever the promises are it is only through a proper process of due diligence can we see if a project stacks up”.
Mr Davies said:

“The Welsh Government’s decision to pull the plug on the Circuit of Wales after seven years of empty promises was a huge blow, but the new plans for an automotive park are yet another Labour promise waiting to be broken. We don’t even have a finalised business case yet.
“How can the Cabinet Secretary claim that the biggest lesson of this whole debacle was the importance of proper due diligence, while he is simultaneously committing £100m to a scheme that no one had even heard of until last month. We need to know that proper due diligence is still going to be followed in this case – and the people of Ebbw Vale will want to know what will happen to these promises if the numbers don’t stack up.
“Is this going to end up going the same way as the Circuit of Wales?”

“We will publish a full business case in relation to the automotive technology park later in the year, which will of course be informed by relevant expertise and assessments, as well as the views emerging from the current stakeholder engagement. We do not intend to publish the specific details of individual areas of advice received in advance of this.
“In terms of the pipeline of projects, it would be inappropriate to disclose the names of individual companies whilst we are discussing the development of potential projects.”


You don't have to be a Tory to find yourself thinking that Mr Davies  has a point and this was little more than a desperate plan to appease even those like myself who has doubts about the Circuit of Wales that at least something was being done to bring jobs to Ebbw Vale.

But just like Ken Skates enthusiasm for the  Iron Ring  seemed to show that he hadn't done his homework . I does look like he seems to have desperately come up with a Plan B and only later come up with what it actually means.

“As the Conservatives already know, extensive external and internal due diligence around the Circuit of Wales project made clear that the main benefits to the local economy would come from businesses clustering in Blaenau Gwent, rather than directly from the race track.
“The Economy Secretary has been clear that he is committed to investing £100m over 10 years to develop its plans for an Automotive Technology Park in Ebbw Vale, and while the Welsh Conservatives have been busy talking these plans down, he has been meeting with industry figures including TVR, Ford, General Dynamics and IQE, as well as representatives of Ebbw Vale Enterprise Zone, Blaenau Gwent Council and Cardiff University, to make these plans a success.
“There is strong and collective ambition between Welsh Government and its partners to shape and deliver a project that can genuinely regenerate the local economy and create the high quality jobs the area needs. We will publish a business case later in the year that draws upon specialist advice and reflects the views emerging from our partners.”

But who will sign up indeed  to what extent will the companies above , will look to the Circuit of Wales saga and not particularly  be impressed with the Welsh Labour Government role in this and query their commitment and certainly demand guarantees that Ken Skates or his successor will not once again pull the plug on this.

There is clearly nothing on paper and it seems no one from industry as yet has even shown an interest.

In ten years time as we look at the empty plots of land, Labour will probably hope the £100 million investment will probably be forgotten and make another promise and come up with what could be Plan Z by then.

The Tories and the other opposition parties have a duty to scrutinise this all the way and make sure we are reminded if as I suspect it turns out nothing like the investment we have been promised.

Posted by glynbeddau at 06:44 No comments: 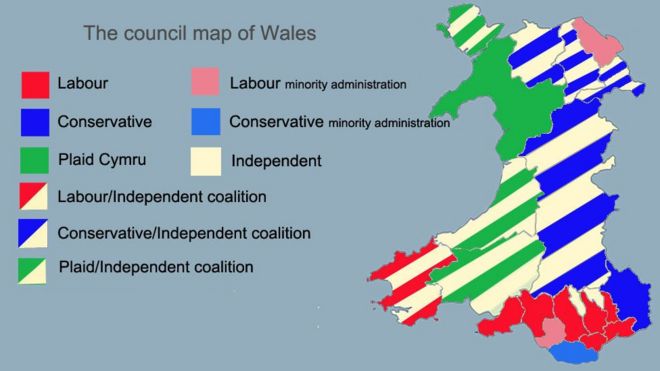 Its a bit misleading Labour have only 7 Councillors in Pembroke-shire and the Tories 9 in Wrexham so they are very much Junior partners . Whilst Plaid are only a few seats short of a Majority in Carmarthen , Ceredigion and the Isle of Anglesey ( When are they going to be just Ynys Mon?)

Independents now control two councils but not as you could expect rural areas but Labour heartlands  of Merthyr and Torfaen.

The one party that can look at the above Map and data with gloom are the Liberal Democrats . Once in power in Cardiff and Swansea they are hardly registering in local Welsh local Government only getting into double figures  in Powys . Though only just in Gwynedd, Ynys Mon and Ceredigion.

There are too many councils with no Plaid councillors and they do not at the moment look to be reaching their former heights in Rhondda Cynon Taf and Caerphilly.

But who knows? Plaid have not been helped by benefiting from a protest vote against Labour  in power in Westminster.

But that is the problem Plaid need to get a positive Plaid vote not a Anti-Labour vote as they have done in the past.

But anyone making future predictions should be careful . Local Government in wales  has proved volatile  at times and we can expect it to do so again.