Welsh Pro-EU politicians have reacted angrily to the prime minister's decision, which could make it difficult for MPs to stop a no-deal Brexit.
First Minister Mark Drakeford said the "constitutional crisis which now faces Wales" meant AMs needed to be recalled.

But Welsh Tory assembly leader Paul Davies said the prorogation of Parliament was normal procedure.
MPs are due to return from their own summer break next week, but the PM's request means there will be less parliamentary time in the run up to Brexit day, on 31 October.
The assembly's recess was due to end on 17 September, but AMs will now hold a day of debate in the Senedd on 5 September.


It seems that  Ukip's Gareth Bennett   is having none of it 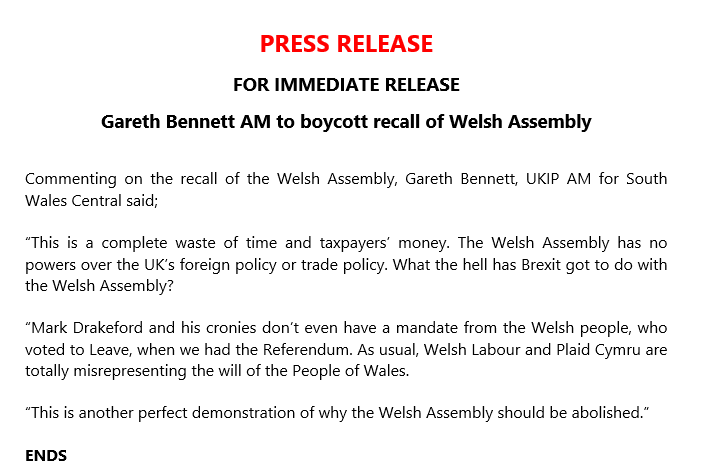 Since Mr Bennett lives in Cardiff it would be no great shakes to pop off to the Assembly and defend the suspension of one our legislatures  , but apparently not.

@AssemblyWales
With respect Gareth, if you are so against the concept of developing a Welsh democracy, why do you continue to sit in our #Senedd Why not be consistent & resign, never to attend any session again?
2
6
66

@AssemblyWales
How dare you. This is our Parliament you are talking about from where you’re happy to take a wage and expenses. You should be sacked immediately. Disgusting individual.
4
51

@AssemblyWales
Resign and hand your salary back then, and the £10,000 you were paid for an office that never opened.
7
12

@AssemblyWales
It’s fine then, don’t take the wage we pay you.
13

@AssemblyWales
Hopefully you will donate your wage for that day to charity! I doubt it. Make the most of your time - you'll be history at the next election!
13

I can'tbelieve people actually voted for you! What a waste of fresh air
9

@AssemblyWales
Not all of Wales voted to leave. Gwynedd and Ceredigion voted Remain
2
3
21

@Dunadan9
·
16h
As did Cardiff, Monmouthshire and the Vale of Glamorgan.
1
22
2 more replies

@AssemblyWales
but it does have powers over agriculture, fisheries, economic development, the environment, food, tourism, health, social services... all of which will be affected by Brexit. Maybe we should keep the Assembly open and just fill it with politicians who understand devolution?
1
2
22

Lisa Power
@alisapower
·
Aug 30
Or maybe he should have some principles and stop taking a salary from a taxpayer funded body he obviously despises?
16

Mr Bennett is of course is echoing Prime Minister  Johnson in refusing to defend the whole concept of a No-Deal Brexit .

They are both sticking their fingers in their ears and shouting "I can't here you.

But as  the protests  mount  with numerous gatherings throughout the UK  including about 2500 in Aberystwyth (and the students are not back yet) it does seem many have not fallen for Prime Minister
rubbish that suspending parliament allows him to set out a fresh domestic agenda in a new Queen’s Speech, due to take place on October 14.

Indeed the whole sorry mess the Tories have made over Brexit started with Theresa May's "Brexit mean Brexit ",  speech when instead of reaching out to MPs and getting a decent leave agreement, she empowered the likes of Johnson and Rees-Mogg and the European Reform Group  who were a minority in thier party

As Mitch Benn puts it