Will the curse of Dafydd El's endorsement strike again?

With just two weeks to go to the Assembly Election and Police and Crime Commissioner  Dafydd Elis Thomas who was the eventual successful Plaid Candidate for Dwyfor Meirionnydd ,urged Plaid, Conservative and Liberal Democrat supporters to give their first or second preference votes to David Taylor on May 5, saying he wants to “stop Ukip in their tracks”.
Commenting on his call, Lord Elis-Thomas said:

“I believe voters in North Wales need to think and act tactically in the election for the Police and Crime Commissioner, in order to stop Ukip in their tracks.
“The relatively new role of commissioner is hugely important in terms of injecting real democratic accountability into policing here in North Wales. It’s crucial therefore that the result of this election is not skewed by the UKIP vote for the Assembly on the same day.
“That’s why I’m calling on all supporters of Plaid Cymru, the Conservatives and the Liberal Democrats right across North Wales to cast either their first or second preference vote for Labour’s David Taylor on polling day, to stop Ukip from inadvertently benefiting.
“David is someone I have known for many years. He is a Labour Party member but like me is never afraid to speak his mind and will always put the interests of North Wales first. He is the candidate who can unite our region.
"I know he would make an outstanding commissioner, bringing a much-needed new energy and enthusiasm to the role.“It’s important that a true reflection of North Wales voting intention determines the outcome of the PCC election on May 5 and extremism is not rewarded by accident.”

Fortunately no-one listened  to Dafydd El and  Plaid's Arfon Jones won the race to become Police and Crime Commissioner and has proved to be an exceptionally good one.

Less thana year since Plaid workers in his constituency tramped the streets for him Dafydd El resigned as a party member and bow sits as an Independent in the Assembly. 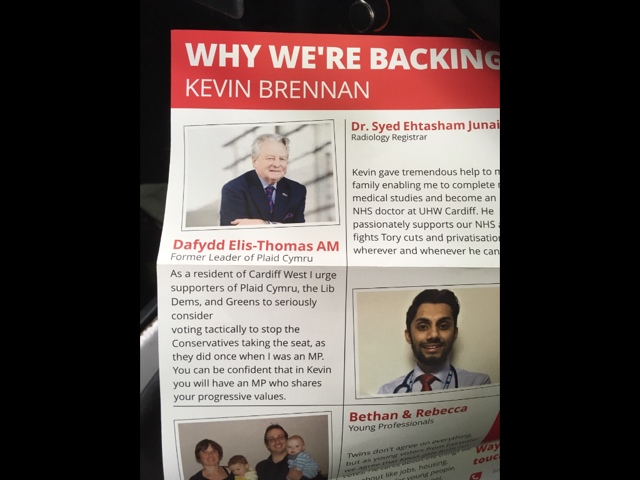 Plaid have been increasing their vote in Cardiff West over the years and whilst they were disappointed not to win more council seats a few weeks ago, on paper at least might just be putting a challenge to Labour.

It seems unlikely but I doubted that Arfon Jones would win the North Wales .

Prehaps the curse of Dafydd El's endorsement will see Plaid;s Michael Deem pull off the shock of the night.