If you want a Progressive rather than Tory Wales vote for Independence,

True the draft mention of Wales is er somewhat sparce
Carwyn Jones said the Welsh Labour manifesto would be "distinct in its purpose, bold in its ambition, and proudly Welsh Labour throughout".
The first minister, who attended the manifesto meeting, said it was "extremely positive and constructive, underlining to all present the strength of the offer that Labour will be putting before the people both in Wales and across the UK on June 8th".
Mr Jones said "strong bonds with our Labour colleagues" at a UK level had meant "Wales's voice has also been heard loud and clear in the UK manifesto".
Er not by this 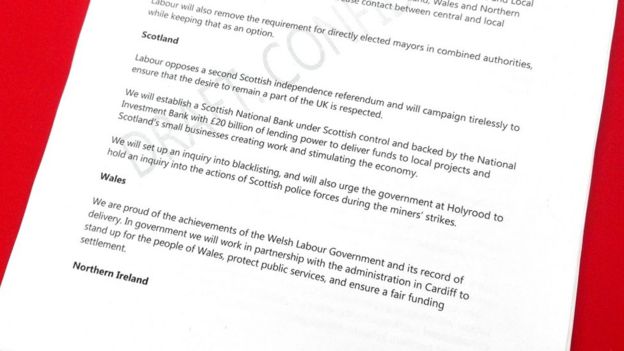 So what difference will the Labour's Welsh Branch contain.
A proposal for Patity with Scotland ?  unlikely  .
Will it take out ending Zero Hour  contracts
Well
Plaid Cymru‏Verified account @Plaid_Cymru

"We've tried 7 times to scrap zero hours contracts in Wales - Labour have voted that down every time" @LeanneWood tells @daily_politics
But no .
In fact  I believe that we see little from Labour's  "Welsh" Manifesto is very little for Wales after all they are a UK party and are not going to have their MP's in a Welsh Bloc with some different policies .
After all what do "Welsh" Labour have to offer that wasn't in their Assembly Manifesto  last year?
In fact the "Welsh" and "Scottish" Manifestos are little more than the Unionist getting two bites of the Cherry when it comes to publicity..
Unless there a miracle next Month the Tories will win by a Landslide .
For Carwyn and the rest of "Welsh" Labour thy will have to decide whether they can continue to sit on the opposition benches indefinably when the Tories continue to make us poor West Britons ,
As I replied to this Tweet from Carwyb


Welsh Labour‏ @WelshLabourMoreWe simply cannot give the Tories the freedom to walk all over Wales. Welsh Labour is #StandingUpForWales
See more: https://youtu.be/Lpq_bjyGyy8

Glyn Morris Retweeted Welsh Labour
So why do you let them by supporting the Union?


Wales face a stark choice either support the Union and Cruel Callous Tory Unionism  or if you support the values in Labour's Draft Manifesto.
Independence.

Certainly the draft we've seen has a lot of good things in it glyn, and if i resided on the other side of offa's dyke where there would be no option of voting for leanne's party then casting my ballot for jezza's labour or caroline lucas's greens wouldnt be an easy decision

Course the proposed manifesto isnt quite the 21st century equivalent of the communist manifesto the tory press would have people believe it is. Rather it's because mainstream british politics has moved so far to the right in recent decades that even proposals which are essentially in the mainstream of european social democracy can seem revolutionary in comparison (in truth every labour manifesto up until 1987 was significantly to the left of what's being proposed in the draft).

But it's not just on electoral reform the leaked draft disappoints. There are no plans to end nuclear power or to ban fracking, and it commits a jeremy corbyn led labour government to maintaining trident and to staying in NATO. While talking about 'retaining the benefits of the single market and the customs union' doesnt mean a lot unless you stay in both, and alas the draft gives no such committment.

While in its opposition to independence for scotland - and a second indie referendum - Jezza's manifesto takes a downright reactionary position (while Wales gets only a cursory mention). But let's face it the 'brit left' have never really understood the national question with regards to scotland and wales and certainly never supported our right to self government. In truth the brit left are as committed to maintaining the unity of the british state as the tories are.