We need a new law on Electoral Expenses,

Well with with only a 8 days to go to election day I still have only received one Candidates election communication  and a letter from Carwyn Jones . 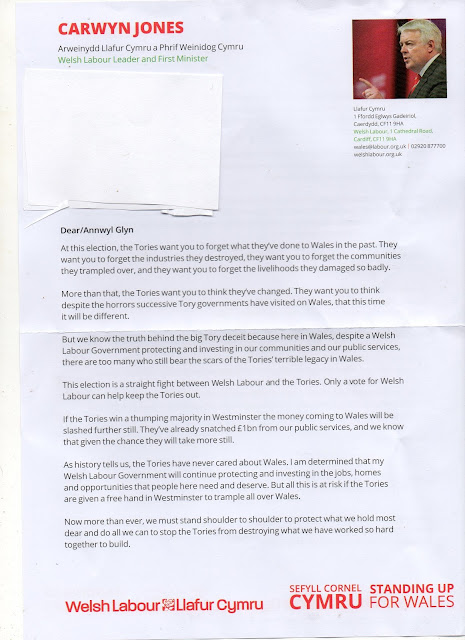 
The cost of personal letters sent by Theresa May to voters that include references to local seats should be included in the expenses of local candidates, according to a former general secretary of Plaid Cymru.Emrys Roberts and his wife Margaret received a letter from the Prime Minister containing six references to the Cardiff West constituency in which they live. 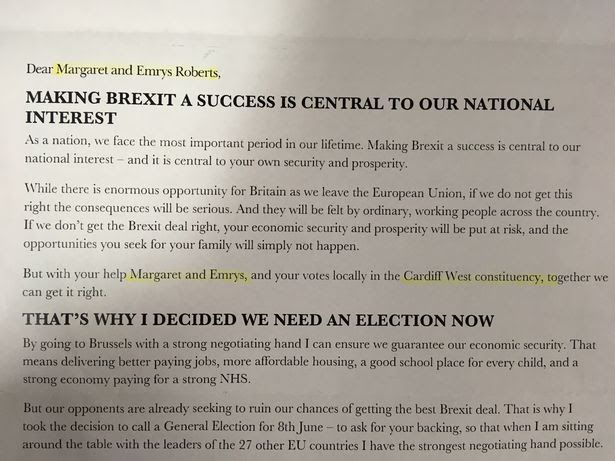 he letter from Mrs May to Mr and Mrs Roberts states:

“If we don’t get the Brexit deal right, your economic security and prosperity will be put at risk, and the opportunities you seek for your family will simply not happen.
“But with your help, Margaret and Emrys, and your votes locally in the Cardiff West constituency, together we can get it right.”

h“And if Jeremy Corbyn wins in the Cardiff West constituency, his position is strengthened and my negotiating position weakened.

“So the only way to back me is by voting Conservative in your local constituency of Cardiff West.”

n a letter to the election returning officer, Mr Roberts and his wife stated:

“We enclose a copy of a letter which we have recently received from Theresa May. Everyone I have spoken to locally has received a copy of the same letter.“We would draw your attention to the fact that our names and the constituency in which we vote are mentioned four times (sic) each.
“The letter is obviously an attempt to persuade us to vote a certain way in a particular constituency and our understanding of electoral law indicates that the cost of producing and sending the letter to us – and presumably to every other household which includes persons with a vote in this constituency – must be included within the permitted expenditure of the Conservative Party candidate and the total must be included in the financial returns which have to be forwarded to you after the election. We trust you will ensure that this is done.”

“The fact that the letter has gone out under the imprint of the director general of the UK Conservative Party strengthens my concern that they intend to class this as national, rather than local, expenditure, which in my view would be in breach of both the letter and the spirit of electoral law.
“When a few weeks ago the Crown Prosecution Service said it would not be bringing charges against a number of Conservative candidates and agents at the 2015 general election who had failed to include items of spending in their local expense returns, the reason given for not prosecuting was because the agents said they did not know the law.
“I want to make sure that excuse cannot be trotted out again, which is why I have written to the returning officer and to the Conservative agent.”I


If this is true then its deplorable   flouting of the spirit of the law even if the CPS has proven time and and Time again to be toothless  in such issues.

But so is Carwyn's " letter"

I am assuming that it has been sent to every one on the electoral register in Wales , but will be included in Labour's UK wide expenditure,

This means both the Tories and Labour can send such mail shot to every elector in Wales and write it of as UK expenditure.

We seem to have a situation where Parties can really spend as much as they like in a constituency  and pass it of as "National" expenditure.

Its a rigged system and the introduction of Mail shots mean we need not only  to update the rules but to enforce them.

Even if this men disqualification of Candidates  which seems to have the reason the CPS chickened out of the Tory scandal from the last election.

We need an electoral system which concentrates on the issues of the campaign , Mot on the manoeuvrings of accountants.