Hillsborough A victory against the Lies.

It is perhaps ironic that if the Sun hadn't published its outrageous  and  totally misleading headlines We may never have got to the recent revelations: Because although the families may have campaigned  over the years the sense of the injustice may have not been so strong amongst the rest of us.

The  Sun had published Truth; some fans picked pockets of victims; some fans urinated on the brave cops; some fans beat up PC giving kiss of life. 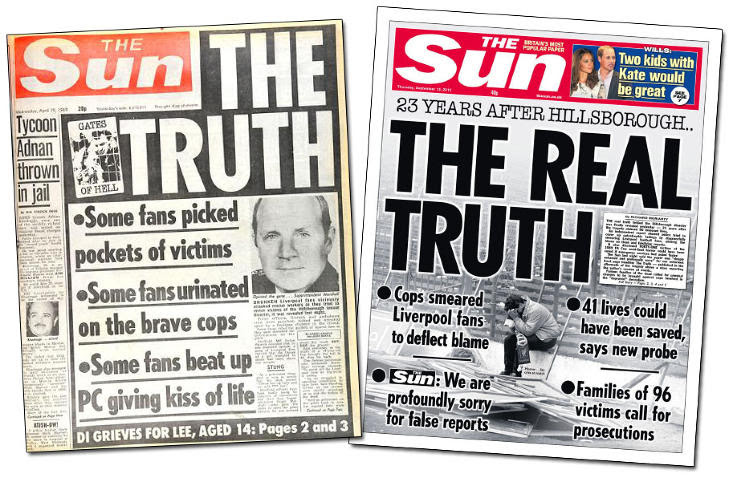 This was the front page of the Sun newspaper on the Wednesday following the Disaster. and its recent apology

In their history of The Sun, Peter Chippendale and Chris Horrie wrote:


As MacKenzie's layout was seen by more and more people, a collective shudder ran through the office (but) MacKenzie's dominance was so total there was nobody left in the organisation who could rein him in except Murdoch. (Everyone in the office) seemed paralysed – "looking like rabbits in the headlights" – as one hack described them. The error staring them in the face was too glaring. It obviously wasn't a silly mistake; nor was it a simple oversight. Nobody really had any comment on it—they just took one look and went away shaking their heads in wonder at the enormity of it. It was a 'classic smear'.


The response to this headline on Merseyside was one of outrage - thousand of copies were stolen and burnt and there followed a successful boycott campaign of the paper.

It now emerges that  the then Conservative MP for Sheffield Hallam, at the time Irvine Patnick passed on inaccurate and untrue information from the police to the press.  Patnick was later Knighted and there have been calls for him to be stripped of his title.

"up to 41" of the ninety-six who perished may have survived had the emergency services' reactions and co-ordination been improved This number is based on post mortem examinations which found that some victims may have had heart, lung or blood circulation function for some time after being removed from the crush. The report stated that placing fans who were "merely unconscious" on their backs would have resulted in their deaths.

Perhaps the incredible news is that


The panel found that South Yorkshire Police and other emergency services had made a "strenuous attempt" to deflect the blame for the tragedy from them and onto the Liverpool supporters. 164 witness statements were amended, 116 of them removing statements which were unfavourable to South Yorkshire Police. In addition police carried out blood alcohol readings of the victims, some of them children, and ran computer check on the national police database in an attempt to "impugn their reputation".

It has been a long journey to get here  and we may have still not got to the full story of the failures of that day  but all credit must go to those who have tirelessly  campaigned for a full truth which was still hidden despite a number of enquiries.seeming to draw a line under it..

But as I said at the start of the post. If the Sun hadn't published its smear then the impetus  for a call for justice for the victims and their families may not be so strong.from those of us not involved . The Sun and those who concluded  in the smear  cannot of course even attempt to use this to justify their position

This Week we got somewhere to give the people of Liverpool the justice they have looked for so long. Tthere  must be no obstacles now in the efforts to bring it to a final conclusion and that means the guilty must face prosecution for their betrayal of their duty and the truth.