I have stated before that I have never taken an illegal drug, though in truth as I have been in a room with friends who were all smoking cannabis, I probably did the reverse of Bill Clinton's  ridiculous

And inhaled  but did not smoke.


I do not however have any objection to people taking recreational  drugs , and find the moral outrage of the revelation  that many of the lead candidates  have  done so pathetic 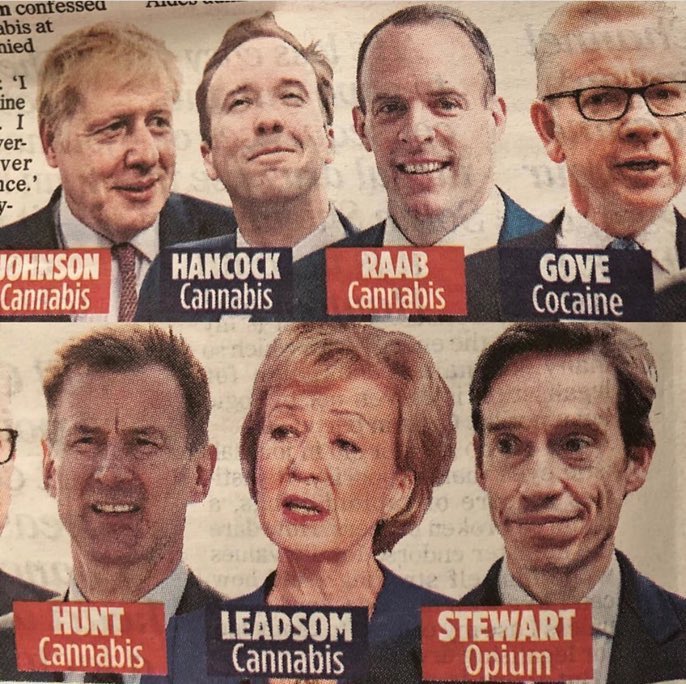 The Daily Mirror may have  point in stating .


The grotesque hypocrisy of the sanctimonious Tory drugs set emphasises why there needs to be a General Election.
Without one, these discredited right-wing traffickers will push another dangerous Prime Minister on Britain.

One law for the Conservative lucky few and another for the unfortunate many is the poisonous blue humbug of this two-faced establishment.
They imprison working class kids for what cocaine-snorting Michael Gove and his smug mob got away with.
Never before have these pious Class A brass-necked con artists appeared so untrustworthy, immoral, incompetent and completely unfit to govern.
I’ve long believed drug abuse should be treated as a health crisis.
Yet it’s stomach-churning to discover that so many law-breaking Tory law- makers smoked dope and sniffed illegal white powder and then piously declared war on less lucky folk doing the same.
Police stopping and searching Tory candidates for PM would arrest a rich haul of self-righteous frauds.


But Kevin Maguire Associate Editor of the Mirror knows full  well that the above level of hypocrisy can be levelled at previous Labour Governments and even more so Fleet Street  editors and reporters as well as other media.Where there are many  past and present user of recreational drugs.

Until we see a manifesto outlaying a major reform of Drug policy, that calls for legalisation of some drugs and decriminalisation of others , which is not met with outrage from  opposition parties  or the media , then we will have this ridiculous state of hypocrites crying hypocrisy.
Posted by glynbeddau at 06:36