Many of you in Wales will by now received a Large and Glossy leaflet from Nigel Farage's Brexit Party Limited Company under the guise of  the Europe of Freedom and Direct Democracy group in the EU.

Indeed the Leaflet intended for our Windows ( though mines going in to the recycling bin because it's no use as bog paper) is to large to scan but here's a sample. 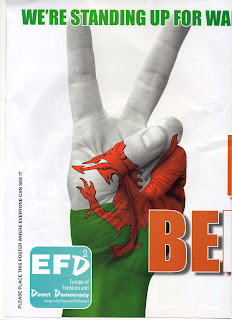 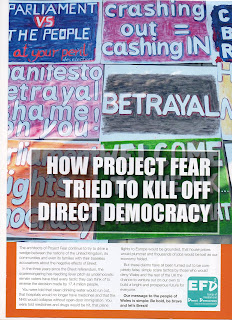 For a Leaflet that calls for Wales  to "Be Bold, be Brave and let's Brexit , the complete absence of Cymraeg tells us a lot.

As I noted this has come from Europe of Freedom and Direct Democracy (EFDD or EFD²) is a Eurosceptic political group in the European Parliament. The EFDD group is a continuation for the Eighth European Parliament of the Europe of Freedom and Democracy (EFD) group that existed during the Seventh European Parliament, with significant changes to group membership.
In 2017, it was one of the seven political groups of the parliament. This group is opposed to European integration.[]Twenty-four out of its 47 MEPs were from the United Kingdom, representing the UK Independence Party.
Its president is British politician Nigel Farage, who was elected for the UK Independence Party, and then became an independent in 2018 before becoming leader of the Brexit Party in 2019.

Its current membership is rather small
Currently, the EFDD has 44 MEPs for the 2019–2024 session among its outgoing parties, but in only 3 countries (short of the 7 needed to constitute a group). If, as planned, the UK leaves the European Union on 31 October, the EFDD will have 15 MEPs.
But at least Nigel can satisfy his ego, by becoming (ironically) the leader of a European Political Group.

We can wonder why this leaflet , where there seems to be different versions , for the UK Nations did not come directly from the Brexit Party Limited cCmpany instead of  using the European group.

Of course they could well be using European and British Taxpayers Money, than that of Brexit Donors (whoever they are,

Mind you not every Brexit Party Limited company, want to waste Taxpayers money

Annunziata Rees-Mogg
@zatzi·Jun 19
I think I might watch this on my shiny new iPad I was given by the European Parliament for no very obvious reason. We need to leave the corrupt gravy train, as we were promised we would.
Quote Tweet

Many people responded by pointing out that they have been provided with equipment , in order to do their job and I wonder if Ms Rees-Mogg expenses will show a level of frugality, tht her leader in the  Brexit Party Limited Company has not shown in his years as a Member of the European Parliament.

Is it not time that the Electoral Commission investigate  Brexit Party Limited Company, on who funds it and just who is directing it.

A report in Ten years in the Guardian as we are still under the austerity that Brexit brought us will not be enough.

Is it legal for political leaflets, in Wales, to be monolingual?