In the last General Election one of the highlights of the campaign was the Leadership debates  which saw Cleggmania  and a temporary surge in LibDem vote but it didn't last and arguably the only effect was to lesson support for smaller party it certainly had a averse  affect on the Plaid vote.

In the Observer Andrew Rawsley rights that

Now, however, there is growing doubt about whether there will be TV debates at the next election, and the main reason is that the prime minister is getting cold feet. In a speech last week, he dwelt on what he didn't like about the experience. While saying that he was still in favour of the principle of debates – he could hardly say otherwise without looking frit – he raised questions about their format and impact. One of this cricket-loving prime minister's favoured phrases is "rolling the pitch". He would not be expressing his reservations now – so far out from the next campaign – if he were not trying to prepare the ground for wriggling out of TV debates if he decides that they aren't in his interests.
As they did last time, when the campaign was spearheaded by Sky News, the broadcasters will clamour for the politicians to agree to televised debates. Indeed, they have already started making approaches to the political parties 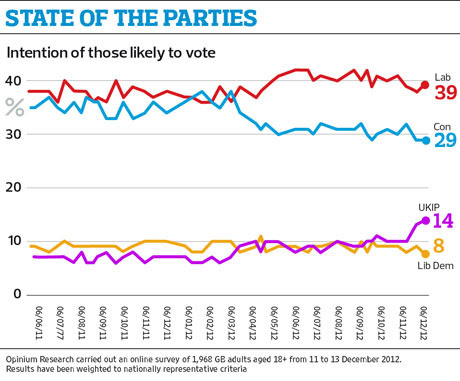 The big surprise is the 14% for UKIP ,which must really worry him.but he will find it hard to put the Genie back in the bottle, especially if he needs to keep Murdoch's News International and his SKY news favourable or at least not completely hostile..

Of course UKIPs position in the polls will make it harder to exclude them but they might prefer that . The idea pf Nigel Farage being exposed in such way in his pompous arrogance and the fact that he leads a one tr trick party may not help them at all. i expect his appearance will hemorrhage votes for them.

One thing that Plaid, the SNP and the Greens could do is agree to campaign that they eachshould take part in one of the three  debate each.

I still don't like the idea of these debates . We are not electing a President and there no constitutional rule that any of these could be Prime Minister.

Indeed the Prime Minister does not even have to come from the three largest Parties . He or She  could be a compromise in a coalition of three or more Parties and only have to persuade the Monarch they can form a government.

Alas no matter how e vote we do not select the Prime Minister constitutionally the Monarch does.

Clegg may well have no choice but to take part in the debate format as proposed Media the relative small loss in actual votes election day rather than immediately after the debates may be preferable too the idea that he is afraid of defending his record.