PPI and International Aid costs both the recipients much more than they receive .

There was an excellent article Yesterday From John Dixon over at Borthlas the other day followed by a rather pithy one from former AM Peter Black over  The revelation that it is going to cost £900,000 to have an RAF aeroplane repainted in red, white and blue with John explaining how it costs so much and Peter attemptong to link it to what his Liberal Democrats called


Ieuan Air' (later renamed Labour Air), an expensive air service between Cardiff and Anglesey used mostly by politicians and civil servants, costing the taxpayer around £86 in subsidy for every one of the 65,073 passengers which used the service between May 2007 and April 2013, and introduced despite the Welsh Government's commitment to sustainability and tackling climate change, later immortalised in the rather vague but well-meaning 'Well-being of Future Generations (Wales) Act 2015.


Of course any sensible reader would see the difference between a vanity project and possibly misguided attempt to make traveling between North Wales and our Southern capitol easier.


It made me wonder, though, about this story from late April about the emergency flight collecting PPE from China (picture from BBC story at the time). It was all arranged in a huge rush, allegedly, yet somehow the company managed to fit in the time and money to have the plane repainted in NHS livery before sending it out to China. Did that little PR exercise really cost them £900.000? Somehow, I doubt it. And I also doubt that it took very long to get the job done. 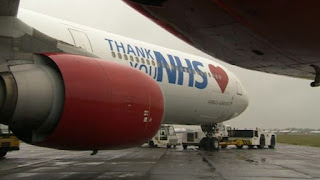 So, what’s the difference? I find myself wondering if this isn’t one of those very profitable outsourcing contracts which the MoD has negotiated under which the painting of aircraft is undertaken by a private company which charges an extortionate amount, completely legitimately under the terms of a poorly negotiated contract, all in the name of converting public cost into private profit. A bit like the £5,500 sink or the £884 chair, maybe. At £900,000, someone, somewhere must be making a lot of money.


Use the £884 chair link it is enlightening.

However I can't help thinking that it is in fact another "Dead Cat on the Table " move to hide  the news that A secretively-funded think tank called the ( Don't Pay) ‘Taxpayers’ Alliance’ told supporters it had “chalked up yet another” policy win after the government announced the Department for International Development would be abolished.


According to Left Foot Forward


The think tank’s director John O’Connell emailed supporters claiming that their ten-year campaign to “cut and reform Britain’s aid spending” had been succesful.


In an email seen by Left Foot Forward, O’Connell said Johnson “was finally acknowledging what we have said all along – that serious changes were needed, despite the Westminster consensus that foreign aid was untouchable”.
O’Connell claimed his organisation had brought about other policy changes such as a public sector pay freeze, which has cut the salaries for those doing jobs like teachers, nurses and police officers.
He also claimed credit for “welfare reform”. In November 2019, the Resolution Foundation think-tank said that Tory welfare reforms like the two-child limit must be reversed or over a million more children would be pushed into poverty.
In June 2019, a United Nations rapporteur said welfare changes seemed to have “intentionally targeted” women and that benefit sanctions were “harsh and arbitrary”.
The ‘Taxpayers Alliance’ has recently campaigned against clean air measures, called Public Health England “bloated” and called for “spending restraint” to pay back the government’s coronavirus debts.
The group has repeatedly refused to diclose its funding sources. In November 2018 the Guardian revealed it had received US$100,000 from a billionaire-funded religious trust incorporated in the Bahamas.
It is one of nine think tanks linked to an address in London’s Tufton Street. These include the Institute of Economic Affairs (IEA) and the climate-change denying Global Warming Policy Federation.
Several former employees of the TPA and IEA are now in government. The TPA’s former campaign manager Chloe Westley is now a special adviser to Boris Johnson.


It seems that the already appalling link to International Aid and forcing Trade Deals on countries seeking it will be come more prominent . Indeed there is a link to John Dixon's  explanation of a £900.000 price for painting a plane.

International Aid like PPI could end up costing poorest nations far more than they receive and lead to further poverty .

A "What's in it for Us"  culture is not the way to treat the poorest people of the world, but it hardly surprising that UK governments Tory and Labour adopt such a stance , They are still tied to the idea of Empire and that the interests of the UK comes firsts.

Or rather rich bankers and speculators the very sort of people to fund the (Don't Pay" Tax Payers Alliance .
Posted by glynbeddau at 06:31