The Not So Magnificent Seven four and half years later.

I covered  the the Story of the less than magnificent  seven  in June and reproduce much of it now.

In the 2016 Assembly election Gill won a seat representing the North Wales region.[17] He was beaten to the post of leader of the UKIP group in the National Assembly for Wales by former Conservative MP Neil Hamilton. Farage described the move as an "unjust act of deep ingratitude" [18] resulting in Hamilton dismissing Farage as simply an "MEP for South East England whose opinions were irrelevant".[19] Gill subsequently left the UKIP group in the assembly to sit as an independent, citing much infighting and distractions.[20] He remained a member of the party and its leader in Wales, until Neil Hamilton was made Wales leader in September 2016.[21] Also in September 2016 Gill's media advisor Alexandra Phillips spoke to The Guardian, stating that she had left UKIP and joined the Conservatives, making comments critical of Hamilton.[22] Staying on as an advisor to Gill, she told BBC Wales that UKIP's foothold in Wales had become "a war zone".[23] Gill resigned as an AM in December 2017.

On 6 December 2018, Gill resigned from UKIP, in opposition to the party leader Gerard Batten's links to far-right activist Tommy Robinson. He joined the new Brexit Party in February 2019.

In May 2016, she voted for Neil Hamilton as leader of the UKIP group in the Welsh Assembly and against Nathan Gill.[7] In March 2018 she was chosen by the UKIP Assembly group over Hamilton's choice of Gareth Bennett to be their representative on the party National Executive Committee[8] and in May 2018 she backed Caroline Jones to replace Hamilton. Brown expressed regret at Jones leaving the group after Bennett won a ballot of party members intended to settle the group's leadership.

In March 2016, Reckless was announced as UKIP's lead candidate for the regional seat of South Wales East. He was elected on 5 May 2016.

On 14 April 2019, Reckless left the Conservative Party Group over the party's failure to deliver Brexit. He then sat as an independent member[33] before joining until the Brexit Party the following month.[6]

On 15 May 2019, Reckless stated his intention to form a new Brexit Party political group, along with Caroline Jones, Mandy Jones, and David Rowlands. He is the current leader of the Brexit Party in the Senedd.[6]

Formerly a UK Independence Party (UKIP) Assembly Member, a somewhat odscure AM who seemed to stay out of the infighting but  Rowlands resigned to join the Brexit Party in May 2019.[3]

Jones defected from the Conservatives to UKIP in 2013[5] and in 2015 she stood for the party in the General Election for the constituency of Bridgend.[6]Jones voted for Neil Hamilton to be the leader of UKIP in the Welsh Assembly.Gareth Bennett, UKIP, South Wales Central electoral region

Jones replaced Hamilton as leader of UKIP in the National Assembly on the 17 May 2018 following a vote by the UKIP group.[8]

On 10 August 2018, Jones lost the group leadership finishing last in the 2018 UKIP Wales leadership election in a three-way contest. Gareth Bennett won the contest and replaced her as group leader.[9]

On 12 September 2018, Jones announced that she was leaving the United Kingdom Independence Party citing her reasons as the party moving "to a more far-right position" under Gerard Batten and a leadership election that was "shambolic from beginning to end". She also said that she was a victim of misogyny claiming that she was once told to "shut up" at a meeting. UKIP Group Leader Gareth Bennett admitted that she was told this by a participant, but that "it had nothing to do with her gender". UKIP Wales Leader Neil Hamilton called on Jones to resign her regional list seat and allow another UKIP member to become an AM, which she refused to do.[10]

On 15 May 2019, Jones along with 3 other Assembly Members joined the Brexit Party.

Bennett joined UKIP in 2014. He campaigned in the 2014 European election, and was agent for UKIP candidate Brian Morris in Cardiff West at the 2015 general election.

When Bennett was selected to contest the South Wales Central electoral region, he was criticised for blaming rubbish problems in Cardiff on students and Eastern European immigrants and was nicknamed the 'Donald Trump of Wales'.[6] This led to senior UKIP figures including leader Nigel Farage and immigration spokesman Steven Woolfe publicly distancing themselves from Bennett.[7] A petition containing the names of 16 other UKIP Assembly candidates opposing Bennett's candidacy was presented to the party's National Executive Committee, which upheld his candidacy. He was elected to National Assembly for Wales as member for South Wales Central in 2016.[8]

In the UKIP Assembly group, Bennett backed Neil Hamilton for leader over Nathan Gill. After Hamilton became leader of the group, Bennett was appointed as UKIP Assembly spokesman for Local Government, Housing and Sport. In April 2017, Bennett was appointed as UKIP's Business Manager in the Assembly. In the same month, the Assembly's Equalities Committee, of which Bennett was a member, published a report about refugees. Bennett brought out his own report, in which he complained that the proposals would encourage more refugees to come to Wales.[9]

In December 2017, Bennett was banned from speaking in the Chamber of the Welsh Assembly for a year by Presiding Officer Elin Jones. The ban came after Bennett claimed that making the process to change legal gender easier would lead society to implode.[10] Bennett refused to apologise or withdraw his remarks, and was barred. In January 2018, Bennett made a partial apology in which he stated that he would accept the authority of the Presiding Officer, and he was allowed to resume his speaking duties without withdrawing his previous remarks.[11]

Bennett claimed almost £10,000 in expenses to set up an office which never opened.[13]

In July 2018, it was announced that there would be a ballot of UKIP party members in Wales to decide the position of UKIP Leader in Wales. The three candidates who announced that they were running for the post were former Assembly Group Leader Neil Hamilton, who had just been ousted from the role; Caroline Jones, who had ousted him; and Gareth Bennett. Bennett's main policy planks included his campaign to abolish the Welsh Assembly, and his opposition to the Welsh Government's Welsh language policies.[14] He won the UKIP Wales leadership election in August 2018, with 269 votes.[15]

In August 2018, Bennett was criticised by First Minister Carwyn Jones and other Assembly members for supporting Boris Johnson's remarks about the Muslim veil.[16]

On 3 June 2019, Bennett announced that he would be running in the 2019 UK Independence Party leadership election[17] after Gerard Batten stood down as leader.[18] Bennett has claimed that he would take UKIP forward with 'bold policy ideas', after Gerard Batten's one-year term came to an end.[19] Bennett published his 2019 UKIP Leadership Election Manifesto on his website, which includes policies such as 'National ID Cards' ,'UKIP Party Democracy', 'National Volunteer Force', 'Regular Referenda', 'Freedom of Speech', 'Regulating Mosques', 'Scrap Foreign Aid' and 'Abolishing Politicians'.[20] On 11 July, Bennett announced that he would withdraw his leadership bid in order to promote Ben Walker's campaign.

On 7 November 2019, he quit UKIP to become an independent politician

Mostyn Neil Hamilton, MS (born 9 March 1949) is a British politician, non-practising barrister, and former teacher. He has been a UK Independence Party (UKIP) Member of the Senedd for the Mid and West Wales region since 2016. He was previously a Conservative MP for the Tatton constituency from 1983 to 1997.

After being implicated (alongside Tim Smith) in the cash-for-questions affair, Hamilton became widely associated with sleaze; he was defeated in the 1997 general election, and subsequently left politics. He left the Conservative Party in 2002, and joined UKIP. He was elected to the National Executive Committee of UKIP in 2011. Following his election to the National Assembly for Wales, he was UKIP Assembly Group Leader from 2016 to 2018 and again from 2019. He has been Leader of UKIP Wales since 26 September 2016.

Jones stood for UKIP in the Clwyd South constituency at the 2015 General Election.[4] She also stood for UKIP in Clwyd South at the 2016 Welsh Assembly election, coming fourth behind Labour, the Conservatives and Plaid Cymru.[5] As the third UKIP candidate on the North Wales regional party list, she failed to secure a National Assembly for Wales seat.[6]

Following the resignation in December 2017 of former UKIP Assembly Member (AM), Nathan Gill, Jones (as the next available UKIP candidate on the regional list) was confirmed on 27 December as the replacement AM.[2][6] She was due to actively take up her duties following an oath swearing ceremony, which took place on 29 December at the Welsh Assembly's Colwyn Bay buildings.[7]

On 9 January 2018, UKIP Wales announced that she would not be joining the UKIP group in the Assembly, due to employing members of other parties in her office.[8] Jones refused to change her staff and described the UKIP group as "toxic". She describes herself as a Faragist and claims former UKIP leader Nigel Farage supports her actions.[9] Her party membership was suspended on 18 June 2018 following criticism of Neil Hamilton's nomination as an assembly commissioner.[10]

In March 2019, Jones spoke in the Assembly Chamber about the physical and emotional abuse she suffered from her adopted mother, in opposition to the Welsh Government's proposals to ban the smacking of children.[11]

In May 2019, Jones along with three other Assembly Members joined the Brexit Party and formed an assembly group in the Senedd, lead by Mark Reckless.

That was in June now The BBC report that

"Two Brexit Party members of the Welsh Parliament and independent member Caroline Jones are forming a new political group in the Senedd.

Ms Jones, David Rowlands and Mandy Jones will be the fourth-largest group in the 60-member parliament as the Independent Alliance for Reform.

It comes amid speculation that Brexit Party group leader Mark Reckless will join the Abolish the Assembly Party.

The new group will focus on reforming devolution, rather than abolition.

Since seven UKIP members were elected in 2016 there have been several changes of party alliance, amid disagreements over policy and future direction.

Caroline Jones, named as the new group's leader, said it would be "committed to engaging with voters in Wales ahead of potential elections next year; to be their voice in deciding how devolution in Wales could work better for the people of our country".

"This won't be a group offering more of the same, nor will we be obsessed with just scrapping everything," she said.

"This will be a group focused on the thing our politics needs most, reform."

Er not quite  It was revealed today that Mark Reckless, formerly the Leader of the Brexit Party, would leave to join the Abolish the Assembly party alongside former UKIP colleague Gareth Bennett.

Nation Cymru have provided a flow chart which I hope they don't mind me reproducing it is important that the Welsh electorate follow this complex game of musical chairs . 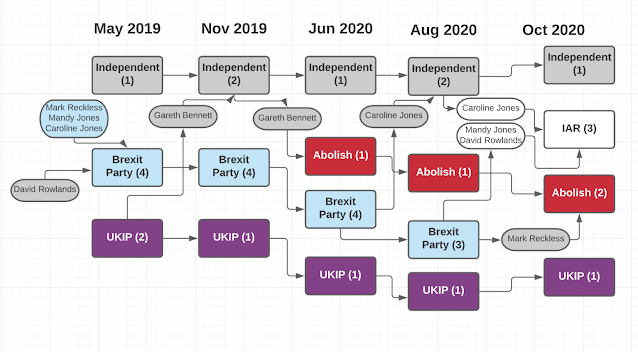 But the election of The Not So Magnificent Seven  has severely damaged that argument.

The fact that some now support the Abolish of the Assembly  (it's the Senedd you idiots) is akin to a Mafia Boss calling for an increase in Law and Order.

I do not relish the idea the three major parties (+ one Lib Dem) will probably win all the seats next May, but if the alternative is any one of the  "The Not So Magnificent Seven" I can live with it.