Nation Cymru and Borthlas have reported on a leaked memo suggests that the Conservative leadership are considering a plan to hand Wales and Scotland more powers to try and keep them in the union.

"The memo seen by Bloomberg news suggests preparing a new constitutional plan ready to roll out in case an SNP victory in May makes Scottish independence almost inevitable.

Rather than rejecting a referendum for Scotland the government should instead focus on a “Four Nations, One Country” policy by transferring further financial powers and allowing differentiation on policies connected to the EU vote, such as immigration.

The memo says that continuing to dismiss Scottish calls for another independence vote outright could be “counterproductive” as support rises.

The document from a political consultancy firm, Hanbury Strategy, that works closely with the Conservative party, Bloomberg said.

The memo offers three steps the UK Government could take to mitigate the pressure: “​New accommodation, new constitutional settlement, and cooperation rather than confrontation.”

These measures could eventually be ratified via a referendum as a “placation” for independence supporters."

Bothlas sums it up as

There are four main elements to their proposed ‘strategy’:

1. Attempt to persuade the Scots that they should stay by devolving more powers to Holyrood. It sounds a lot like a watered-down version of the infamous ‘Vow’, a promise of greater devolution if the Scots voted ‘no’ on which the UK parties, led by the Tories, promptly reneged after the vote. As cunning plans go, assuming that the Scots will be stupid enough to fall for the same tactic again looks more Baldrick than Machiavelli. And that would be true even if the Scots couldn’t read, in the same article, that many Tories will oppose this route anyway, preferring to reduce rather than enhance the powers of the Scottish parliament.

2. Get the EU to make it clear that there is no easy route to membership for an independent Scotland. The EU will, of course, play ball with this because… Well, presumably because they really want to go out of their way to provide political support to people who have spent the last four years being obstructive and objectionable and who are trying to undo the whole EU project rather than those who have bought into the European ideal and want to promote it. Yes, I can see how that looks like a sensible approach to English exceptionalists - but not to anyone else. On the cunningness scale it also runs far wide of the goalposts.

3. To attack the perceived failings of the Scottish government, “making the [SNP] 'pay the price' for running the semi-autonomous administration since 2007”. I’m not going to pretend that the SNP record in a number of fields has been perfect; it has not. But given that at least some of the problems can be laid at the lack of powers (and especially financial powers) devolved to Scotland, and given the patent failings of the UK Government, the words which immediately jump into my mind at the thought of the UK government inviting people to compare its record with that of Scotland are ‘shoot’ and ‘foot’.

4. To launch a “a hard-hitting, attack-focused” campaign against Sturgeon. Again, I can only wonder at the mindset behind a proposal that what is widely seen to be the most dishonest, corrupt and incompetent government in the modern history of the UK would be taken seriously if it launches a personal attack on the single politician in the whole of the UK who most emerges from the handling of the pandemic with hugely-enhanced credibility.

It is all reminiscent of the VOW 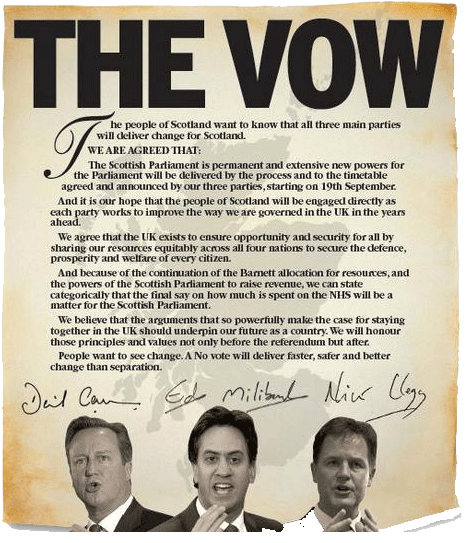 The Smith Commission was announced by Prime Minister David Cameron on 19 September 2014 in the wake of the 'No' vote in the 2014 Scottish independence referendum. The establishment of the commission was part of the process of fulfilling The Vow made by the leaders of the three main unionist parties during the last days of the referendum campaign. The Vow promised the devolution of more powers from the Parliament of the United Kingdom to the Scottish Parliament in the event of a No vote.

Following the No vote, Lord Smith of Kelvin was given the task to "convene cross-party talks and facilitate an inclusive engagement process across Scotland to produce, by 30 November 2014, Heads of Agreement with recommendations for further devolution of powers to the Scottish Parliament" Ten representatives were nominated by the political parties with elected members in the Scottish Parliament; the Commission started its discussions on 22 October. Agreement was reached and the report published on 27 November 2014.

Following the Conservative election victory at the 2015 UK General Election, the Scotland Bill 2015–16 was proposed in the first Queen's Speech, to put into effect the recommendations of the Smith Commission.

But also almost immediately  after the outcome of the vote was announced, the Prime Minister, David Cameron, stated that the "question of English votes for English laws – the so-called West Lothian question – requires a decisive answer." He announced the appointment of Lord Smith to lead a commission to develop proposals for constitutional reform to be included in a Bill to be published in January 2015 Labour refused to engage in cross party discussions about the issue.

Guess which one of the above were implemented?

Boris  Johnson is set to stamp schemes in Scotland paid for by the UK Government with a Union flag from next year.

The Telegraph reports that the flag will replace the EU symbol used to show infrastructure like bridges or roads have been funded by Brussels.

The news has been highly criticised by senior SNP figures who accuse the Prime Minister of “trying to force the Union flag down people’s throats”.

But the idea is backed by new Scottish Tory leader Douglas Ross, who wants to show the “visual connection” between UK funding and schemes in Scotland.

He said the party should be “unashamed of our investment in Scotland”.

Of course the Unions investment in Scotland would have to be extensive ,to visibly match the existing number of EU funded projects,

I suspect the Tories will play a Cat and Mouse game showing their power whilst offering an illusion of the chance for freedom.

Will Scotland fall for it . Well the UK media will do their best to get them to do so.