Starmer doesnt want to "Turn the clock back" any further than Blair.

As the Guardian which laughably is regarded as in the only Left of Centre daily newspaper by some says.

The speech won a generally favourable reception from those within Labour and the unions, although Momentum, the Jeremy Corbyn-linked campaign group called it “a missed opportunity to show substance”. 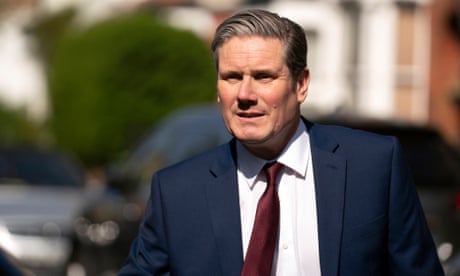 It was pointless complaining about the result, Starmer said, adding: “Let’s be brutally honest with ourselves. When you lose an election in a democracy, you deserve to. You don’t look at the electorate and ask them: ‘What were you thinking?’ You look at yourself and ask: ‘What were we doing?

What kind of "election in a democracy" is fought with virtually all of the media hostile to you? Forget the Anti-Semitic slurs it was Jeremy Corbyn's socialism they objected to.

"The Labour party has lost four general elections in a row. We’ve granted the Tories a decade of power. The Tories have had as many election winners in five years as we’ve had in 75. It’s a betrayal of what we believe in to let this go on. It’s time to get serious about winning.”

Starmer stressed his efforts over combating antisemitism in Labour, saying the party was “becoming a competent, credible opposition”.

“Never again will Labour go into an election not being trusted on national security, with your job, with your community and with your money. That’s what being under new leadership means.”“I'm not the sort of leader who wants to turn the clock back.

“Times change - and so do political priorities.”

What he  means however is precisely  that ie back to Blairism  and neo-liberalism courting right wing newspaper bosses and hoping they will tirn against Boris Johnson as they did John Major.

What  of his "Patriotic Nationalism"He said during his speech:

“We must once again be the party of the whole United Kingdom.

“The party of England, Wales, Scotland and Northern Ireland.

“We must make the case much more persuasively that we achieve more together than we do alone.

“To stop the nationalists ripping our country apart by design and to stop the Tories dismantling it by neglect.

Does Mr Starmer know that Labour does not even stand in Northern Ireland its Sister Party the SDLP does but it advocates Irish reunification, and the further devolution of powers while Northern Ireland remains part of the United Kingdom.

Prehaps Mr Starmar does know and that thereere has  been a debate in the party on the prospects of amalgamation with Fianna Fáil. and in n February 2019, at a special party conference, the members approved a partnership with Fianna Fáil.

Maybe the Westminster Unionists in Labour  might push to stand in Northern Ireland .

Indeed not to do so with the aim of preserving the  Union would be hypocritical I repeat Mr Stammer.

“We must once again be the party of the whole United Kingdom.

“The party of England, Wales, Scotland and Northern Ireland.

“We must make the case much more persuasively that we achieve more together than we do alone.

“To stop the nationalists ripping our country apart by design and to stop the Tories dismantling it by neglect.

A referendum on the reunification of the Island of Ireland , would be most illuminating . Labour might try and wave the Ddraig Gogh or Saltire with the Union flag in Wales or Scotland at the same time , but it cant do the asme with said Union Flag and Irish Tricolor .

Many of us in Wales have already rejected Labour's Unionism and its Blairist (Starmerist?) wing we need to ensure that more do so.