I must admit of all the people I follow on Twitter one of the best is the former English Hooker Brian Moore.

I accept his English bias when it comes to commentary on Rugby ,for  he is insightful and probably knows what is going on in the Scrums and usually accepts that his side deserve to loose. 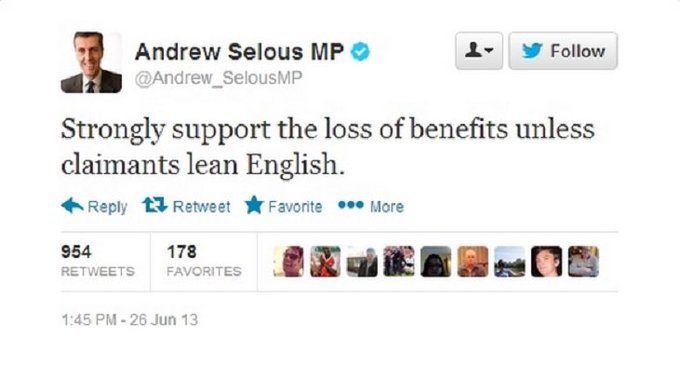 So who is Andrew  Selous , well he anything but a comedian though he new director-general of the BBC , would want one like him. 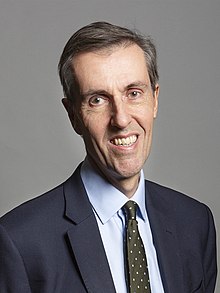 Apart from provoking ridicule by making a tweet (subsequently deleted) supporting the removal of benefit entitlement from non-English speakers: "Strongly support the loss of benefits unless claimants lean [sic] English." [12]

Selous chairs the All Party Parliamentary Group on Strengthening Couple Relationships, and argues that cross-party efforts to prevent family breakdown can relieve pressure on the care system.[14] He was opposed to the Marriage (Same Sex Couples) Act 2013, arguing that it was directly contrary to what Jesus said.[15]

In terms of Selous’ voting history in Parliament, he regularly voted against human rights, equality & LGBT rights, as well as against funding to guarantee jobs for young people. Selous voted in favour of reducing welfare benefits for disabled people, increasing VAT and tuition fees, and ending financial support for young people in education.[16]

He was appointed Second Church Estates Commissioner, responsible for representing the Church Commissioners in Parliament and in the General Synod of the Church of England, on 10 January 2020.

hey was created in 1983, mostly from the former seat of South Bedfordshire. It was represented by Sir David Madel, a Conservative, from its creation until his retirement in 2001; he almost suffered one of the biggest upsets of the 1997 general election, when the Labour candidate spectacularly slashed his majority from 21,273 in 1992 to just 132. but it is now a safe seat

We often see the portrayal of working class people who support bigoted  views.

But it in seats like South West Bedfordshire with a  majority of middle class voters who elect people like  Selous , and who cannot be voted out even if faced with a progresive coalition.

For those in Wales who consider themselves  on the left who support the Union , ask yourselves , whether we should be part of a union not where people like Selous can get elected for we have too many Tory MPs , but where they cannot be defeated.