Labour voters for independence should take thier vote elsewhere.

Though a majority of those who voted Labour at the 2019 General Election would back Welsh independence if a referendum was held tomorrow, according to a new YouGov poll.

Welsh Nation tell us that

With the figures adjusted to remove those who refused to answer, didn’t know or said that they wouldn’t vote, 51% of respondents who voted for Labour said they would vote for Welsh independence with 49% against.

The polling also showed that the majority in Wales believed the power to call a referendum on Welsh independence should lie with the Senedd rather than Westminster. 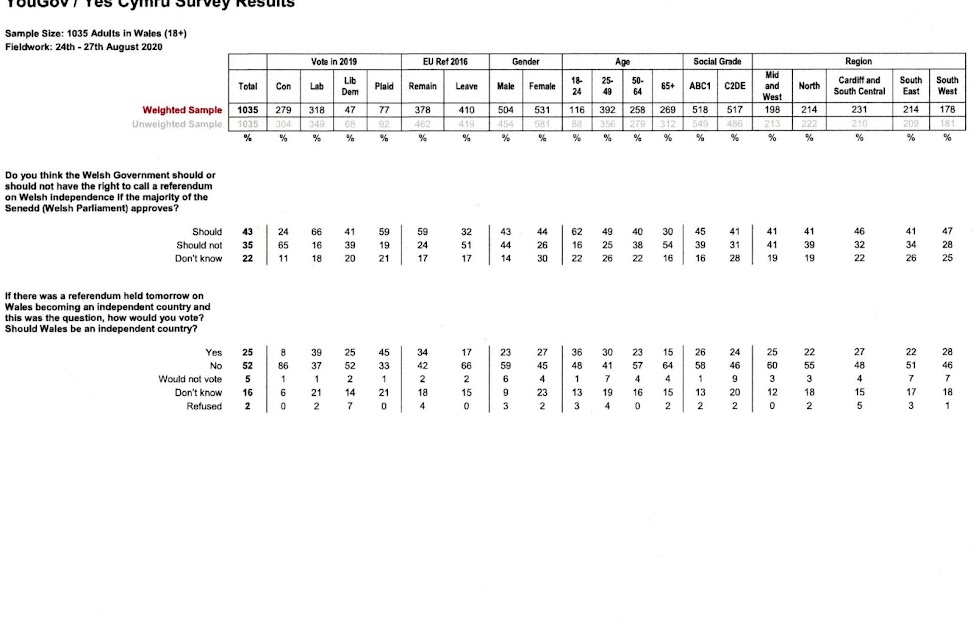 With those who didn’t know removed, 55% of respondents backed the Senedd having such powers with 45% against.

The overall number in favour of independence has stayed the same with 32% in favour and 68% against.

The group Labour \labour for an Independent Wales have seized on this to claim their approach is working.

Labour for IndyWales
@Lab4IndyWales
·
17h
seen the news
@NevilleSouthall
? Our work has made a majority.

Seems a long way from our Llandudno event in 2018!
Quote Tweet

Labour for IndyWales
@Lab4IndyWales
· 21h
We said it was big... A *majority* of Welsh Labour voters would back Welsh independence

It would be helpful if , they  were more open about how many there were and perhaps provide some names. Though I understand they risk of expulsion.

Because of course Labour "Voters" are not Labour members and certainly not the Labour leadership.

The lesson for Labour from Scotland , is that if they chose the wrong side in the Independence debate they face loosing their hegemony to Independence Parties.

Maybe things could change in the "Welsh leadership elections to be held during the next Senedd as Mark Drakeford  as said he will stand down Mid-Term.

Unless a candidate for leader stands on a Indy platform, then what appears to be growing wave on favour of it will see them swept aside as in Scotland.

Indeed with rumours of the Scottish Labour leader facing a coup , for any candidate there to take up the Independence banner may to late.

At the moment those Labour voters who favour Welsh Independence should consider taking their votes elsewhere.