Nick Clegg went from Hero to Zero in five years.

The extraordinary demise of the liberal Democrats in Wales , is a sober lesson  in how careful smaller parties must be in joining a coalition.

It@s hard to remember that it is just over 10 years that the first British leaders' debate  when LibDem leader surpassed expectations.


Clegg asserted himself as the star of the show, anointed as such by a whopping 51% of those surveyed by an instant Sun/YouGov poll.

Clegg's support rose sharply after the debate, with some polls even putting him ahead of his opponents. 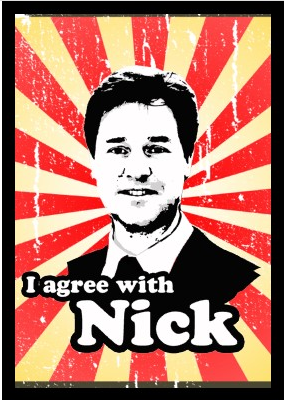 However the phase did not last long and the Liberal Democrats lost 5 seats .

Clegg's Liberal Democrats found themselves with 57 seats in the House of Commons. The Conservative Party, which failed to receive a majority, formed a coalition with the Liberal Democrats, and Clegg was appointed by David Cameron to serve as his Deputy Prime Minister. In this capacity, he became the first leader of the Liberal Democrats to answer for the Prime Minister's Questions, and used his influence in the position to pass the Fixed-term Parliaments Act.[9] Controversy arose during this time surrounding the Liberal Democrats' decision to abandon their pledge to oppose increases in tuition fees, which had previously been a key issue that won the party support from students.[10]

During the party's time in coalition, the Liberal Democrats saw a significant drop in support, and the 2015 general election losing 49 seats and  left the party with just 8 seats, and an incredible  15215 drop in their overall vote.which resulted in Clegg's ousting as Deputy Prime Minister and his resignation as party leader. In 2016,

In the 2010 election in Wales the Liberal Democrats saw some big swings in Labour seats , which would have been major targets in 2015 if the writing was not already on the wall of thier demise.

Of the 80 rejected ballots:

Who knows what the result in 2015 , would have been in these constituencies if the Tories or Labour had  won a majority ten years earlier?

There are academics who can explain why it is junior coalition partners who seem to be punished at the next General Election. It could be that they often rely on a protest vote and when in goverment lose it.

The United Kingdom Alternative Vote referendum, also known as the UK-wide referendum on the Parliamentary voting system was held on Thursday 5 May 2011 (the same date as local elections in many areas) in the United Kingdom (UK) to choose the method of electing MPs at subsequent general elections. It occurred as a provision of the Conservative–Liberal Democrat coalition agreement drawn up in 2010 (after a general election that had resulted in the first hung parliament since February 1974) and also indirectly in the aftermath of the 2009 expenses scandal. It operated under the provisions of the Parliamentary Voting System and Constituencies Act 2011 and was the first national national referen

The Lib Dem however were suckered into accepting AV as the choice instead of STV and failed to realise how the major parties could muster opposition in the media.
However  the question remains that unless you can guarantees weeping changes to the  UK constitution. PR, Eleted Second Chamber and devolved powers it may be unwise to join either Labour or the Tories in power.
Posted by glynbeddau at 06:30