Why haven't we the technology to prevent drone attack? 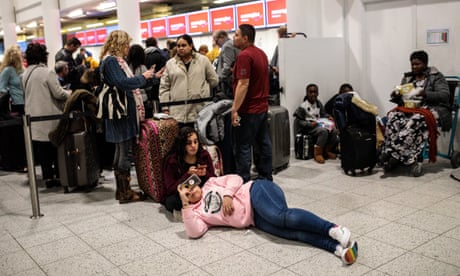 
Read more
The fact that (if they are the people responsible)  that two people have been arrested in connection with the “criminal use of drones” which has caused widespread disruption to flights at Gatwick airport, is reassuring.
In a statement released in the early hours of Saturday, Sussex police said the arrests were made just after 10pm on Friday night.

The force has not disclosed the ages or genders of those arrested, nor the locations of where the arrests took place.

The airport was plunged into chaos on Wednesday night when drones spotted hovering near the runways forced hundreds of flights to be cancelled, delaying and stranding thousands of passengers.

Police and military experts were deployed to search for the operators of the drones, which reappeared near the airport every time the authorities tried to reopen the runways.

Airlines scrambled to board passengers while the airport was reopened on Friday. But it was closed again on Friday afternoon when the drones reappeared. Military measures reassured operators that it was safe to reopen the runway shortly afterwards.
Inbound flights were also operating with delays, with some scheduled to arrive at Gatwick in the early hours of Saturday.
I don't  want to come all conspiracy theorist but I can't see how government couldn't see it coming.
Clearly passenger safety has always been paramount, but it does lead to a number of questions that need to be both answered and addressed  immediately.


Of course such technology may already exist or are being developed , but given both the US and UK deploy " Military Drones" against enemy targets
Since 2004, the United States government has attacked thousands of targets in Northwest Pakistan using unmanned aerial vehicles (drones) operated by the United States Air Force under the operational control of the Central Intelligence Agency's Special Activities Division.[] Most of these attacks are on targets in the Federally Administered Tribal Areas along the Afghan border in Northwest Pakistan.
These strikes began during the administration of United States President George W. Bush,  Some in the media have referred to the attacks as a "drone war".[The George W. Bush administration officially denied the extent of its policy; in May 2013, the Obama administration acknowledged for the first time that four US citizens had been killed in the strikes.

The Bureau of Investigative Journalism estimates the following cumulative statistics about U.S. drone strikes (as of 17 September 2017):[6]

If such technology Anti-Drone  exists  it could mean that it would be probably not long before  terrorists who seem to have no problem getting hold of weapons .

The recent events at Gatwick  point to what is a relatively cheap and effective way to disrupt any nation's air space.

It is something that perhaps democratic governments should get together  and address.

Unless of course they already have and don't want us to know.

Good to hear arrests have been made, but if the individuals arrested are the ones who have been responsible for this awful disruption (and we don't know that for sure yet) I sincerely hope they are not so called 'eco warriors. Because such idiotic actions would set back the environmentalists case for years in Britain.

On the point about having the technology to protect airports from such things Glynn I wonder is it the case that we are now living in an age where developments in technology are outstripping governments ability to cope with them? I know before he passed away the late - and great - Stephen hawking issued many warnings about the potential dangers of artificial intelligence to humanity for instance.

And like you I'm not one who buys into the inevitable conspiracy theories that have surfaced on social media in relation to events at Gatwick that said this is the second time in a week the british army have been linked to intervening in a major crisis (the other being the consequences of a no deal brexit).

Maybe we are being psychological prepared for something?