For 100 years progressives in British politics have tried to bring democracy to one of the most important but arcane institutions in our country – the House of Lords. And for 100 years, the establishment has resisted, blocked or talked out those who argue for change at every turn. But today we have an historic opportunity to finally bring about that change – and it is in Labour's hands.
It is clear that, despite committing to a mostly elected House of Lords in their last three manifestos and the coalition agreement, many Conservatives are likely to give in to their instincts and defend the establishment. Tomorrow's vote to bring forward this historic piece of legislation is on a knife-edge. Labour MPs have the chance to tip the balance in favour of reform.

According to the Guardian.

Ed Miliband is planning to support the House of Lords reform bill at its second reading. But he is ordering Labour MPs to join forces with Tory rebels, 74 of whom signed a letter denouncing the reforms, to vote down a "programme motion" for the bill.

Rebel leaders, who say they have the support of 100 Tory MPs, would need only around 50 to defeat the government if they have Labour's support. Clegg fears that without the Guillotine  motion  which sets a timetable for the bill, his reforms will be talked out by Tory MPs.


If we didn't have the ridiculous practise of "The Parliamentary Year then there would be no need for a Guillotine and the Tory "Last Ditchers" could not talk this out. 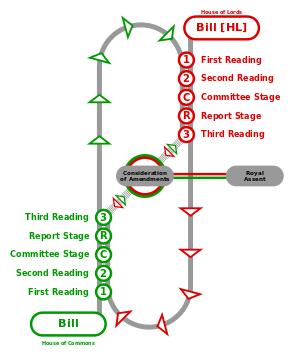 Why cant a bill, which needs a lot of Debate and necessary amendments as this one does take the whole length of this Parlaiment  to go through?. Because it seriously flawed at the moment  and if we will not get another chance if it is passed for reform for a generation even if   take Longer to pass through the House of Commons and Lords than other Bills as long as its not wrecked beyond repair of course.

If I thought Labour,  once they are were again in power would produce a bill giving us a truly democratic second chamber. I would encourage them to vote against this flawed Bill . But they have failed in the past and can't be trusted to do so in the future.

As you listen to the pompous Tory Backbenchers "defending democracy" in attacking the Bill and the unelected second chamber then I am tending despite its piss poor nature to support at least the concept of the bill. Since it seems that it is in the hands of Labour will they put the chance of causing a rift in the coalition by voting against the Bill. If they do then they should let us know what alternative they have.