The demonisation of Teachers by teachers by the Right Wong (Tory Propaganda) Press, over Union concerns over reopening Schools  has been appalling.

Led by the Daily Hate Mail  tey  used the language of war they love so much to persuade their readers to back the move. 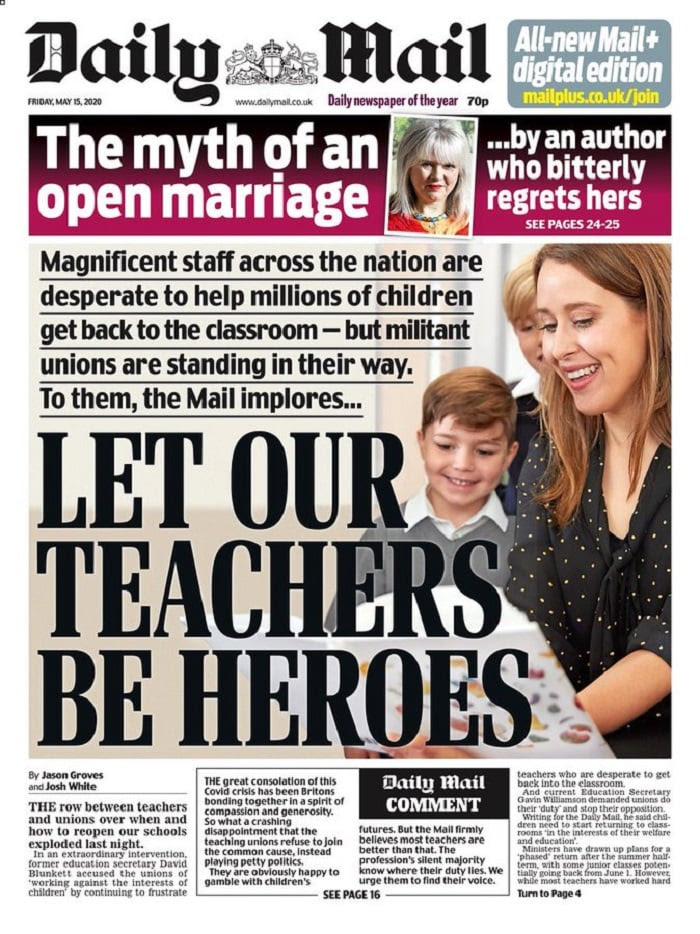 Now in a unique  act of defiance up to 1,500 primary schools in England are expected to remain closed on 1 June after a rebellion by at least 18 councils forced the government to say it had no plans to sanction them.
The Guardian reports that

As the backlash escalated over the government’s policy of lifting the coronavirus lockdown on schools in a fortnight, a number of new local authorities said on Tuesday they would not force primary schools in their area to follow the plan. Councils joining those already in opposition included Birmingham, Calderdale council in Yorkshire, and Conservative-controlled Solihull. In total they represent more than 1,500 maintained primaries.
ith more councils likely to join them on Wednesday, the education secretary, Gavin Williamson, met union leaders to address concerns that the plan could put staff at risk and contribute to the spread of coronavirus. Downing Street said its aim was to work “in a consultative way” rather than impose penalties on schools or councils that rejected the reopening date.

Reports earlier this week suggested councils that refused to comply could be subject to legal action or even financial penalties, but the prime minister’s spokesman told reporters: “We are continuing to work closely with teachers, schools and the unions, as we have done for the past eight weeks, and remain keen to hear any concerns they may have.
“We are preparing for the possible opening of schools for more children from 1 June at the earliest, but that will only happen if it is safe to do so. But we do also have to bear in mind the harm which can be done to children by missing out on important education.”
Asked if there could be any sanctions for those who disagreed, he said: “You can see what the focus of our attention is at the moment, which is trying to work with them in a consultative way in order to be able to open schools to more pupils in a way that is safe.”Coronavirus: the week explained - sign up for our email newsletter

One winders if the English councils have been encouraged on how the Welsh, Scottish Parliaments and Northern Ireland Executive  refused to follow the line of Boris Johnson's piss poor attempts to relax restrictions in England  and though  "This is for us to decide and we don't  risk Teachers  even more considering many are still teaching those children whose parents are still working.

It has been further amplified , bu the news that Mr Johnson's old (and that of many of his cabinet colleagues will not reopen until September.

Frankly I believe that should be our aim also .Sending children back for a few weeks before the official holiday period seems to have no point other than to convince the population , that "England" is coming out of the pandemic and the UK (English) government has won its battle against corona-19.

The Lockdown must end as soon as possible , but the risk of a second wave is still a concern.

Better to wait a while and not use our Teachers and Children as Guinea pigs or to make Boris Johnson look good in the eurs of his friends in the UK media.

The Scottish school year also ends during June starts again in mid August. There would be little point in returning before then, and indeed the English should maybe consider changing to that instead of their pig headed belief that everyone should do what they do, because they are alway right and any deviation from what they do or what they want is unnacceptable to them.

In fact, many of them are so up their own fundaments that they don't know the differences between the nations of the U.K. and would struggle to understand why we would want to be different from them.

I long for an independent Scotland, but doubt if I will live long enough to see it, as the English, and the boneheaded unionist Scots, will fight a bitter, nasty and probably in the end violent battle to keep Scotland. Look what they did in Ireland, and Scotland is far more resource rich and economically important to them.

This "UK" (English) government is the worst, most incompetent, and most driven by right wing ldeology in my lifetime. I fear for us all. They are quite ok with us ordinary people dying.