Johnson avoids scrutiny and then complains when it's highlighted.

Last night's General election 2019: Row over Boris Johnson debate 'empty chair' gave many voters not only outside Wales but also here to see how Plaid Cymru  leader preforms in the leaders debate.

Of course the main story is that the Conservative Party reacted with fury  a row with Channel 4 over the broadcaster's decision to "empty chair" Boris Johnson and Nigel Farageduring its election debate on climate change last night. 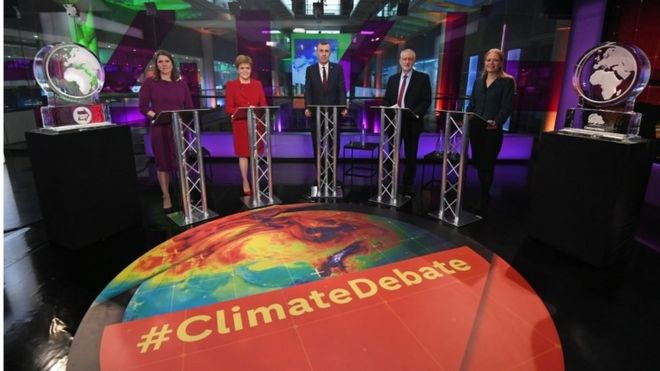 Minister Michael Gove offered to take his place, but the broadcaster said the invitation was for leaders only.. though from what I understand Gove just turned up , having learned of Johnson being empty chaired

The party wrote to Ofcom saying placing an ice sculpture on the PM's podium was a "provocative partisan stunt".
Labour has accused Mr Johnson of "hiding from scrutiny".
Urging the regulator to take action against Channel 4, the Conservative Party accused the broadcaster of breaking its duty to be impartial and citing other alleged examples of bias.

n a letter to Ofcom, the party says Channel 4 News staged a "provocative partisan stunt, which would itself constitute making a political opinion in its own right" by substituting the PM with an ice sculpture.Conservative sources also briefed journalists at BuzzFeed News and the Telegraph that "if we are re-elected we will have to review Channel 4's Public Services Broadcasting obligations".
Channel 4's public service broadcasting licence is up for renewal in 2024.
Labour's deputy leader Tom Watson said it was "deeply concerning for Boris Johnson's Conservative Party to threaten Channel 4 in this way".

Mr Watson has written to Ofcom to urge the regulator to "call out this meddling".


His letter adds: "Boris Johnson has banned the Daily Mirror from its battle bus, ducked the Andrew Neil interview and now attempted to bully Channel 4."
Mr Gove, a former environment secretary, said he was disappointed not to be allowed to take part in the climate debate, adding: "We have a record we are proud of and we want to defend."
Channel 4 also replaced Brexit Party leader Nigel Farage with ice in the hour-long programme.
Channel 4 News editor Ben de Pear said: "These two ice sculptures represent the emergency on planet earth, not in any human form but are a visual metaphor for the Conservative and Brexit parties after their leaders declined our repeated invitations to attend tonight's vital climate debate."
The Emergency On Planet Earth debate featured Labour leader Jeremy Corbyn, Liberal Democrat leader Jo Swinson, Scottish First Minister and SNP leader Nicola Sturgeon, Plaid Cymru's leader Adam Price and Green co-leader Sian Berry.
"Empty chairing" is where a debate or interview is conducted without one of its participants.
'Hiding from scrutiny'
Meanwhile, Labour has published 60 questions it wants Boris Johnson to answer, including on sexism, the NHS, Brexit and his ministers.
The party has accused Mr Johnson of "hiding from scrutiny" and its questions include: "Are you scared of Andrew Neil?"
On Thursday, Mr Johnson refused to say whether he would agree to an interview with the BBC's Andrew Neil, who has already grilled Labour leader Jeremy Corbyn, the SNP's Nicola Sturgeon, and is planning to interview other party leaders.
When asked several times by the BBC's Ben Wright if he would take part, Boris Johnson would not confirm it, saying he would have "all sorts of interviews with all sorts of people".Mr Johnson - who was interviewed by Mr Neil during the Conservative leadership election in July - confirmed negotiations were still taking place, but he said it was "not my job" to make the final decision.
He added: "Other people than me are responsible for those discussions and negotiations, and I do not want to pre-empt what they may decide."

Yes that's right in what could have been the clincher debate of the election bot Johnson and  Corbyn try to lower the status and the fact that people could see an alternative , by sending "B List "  MP to take their place and whilst Caroline Lucas is not the leader of the Green Party she is a MP and their highest profile candidate.

Oddly it is the people of England who need see an alternative to both Johnson and Corbyn and not just the Liberal Democrats.

Here in Wales as in Scotland we do and I suspect there will be many over the boarder watching  who will wonder why they can't vote for a party led by Price or Sturgeon.

This election has been portrays as a choice between Johnson or Corbyn  and whilst I respect the latter and lath the former if  I was in England I would have no problem in voting Green even if they have no chance of winning.

In our flawed electoral system skewed to the two major parties , the voice of those who don't want either will be completely ignored.

What kind of Democracy is this?