Wasting Mule must apologise for Cymdeithas smear. Update (they have).

On Wednesday the Wasting Mule reported that

Parents in a village divided over a decision by Carmarthenshire council to turn the local primary school into a Welsh medium school say they have had their tyres slashed and they have been spat and sworn at in the street.
The parents, all of whom have children in the soon to be closed English medium stream at Ysgol Llangennech, near Llanelli, say they are not members of any political party but opposed plans to make the school Welsh medium only as part of the The Keep Llangennech Dual Group.


One mother with children at the school, who did not want to be named for fear of reprisals, said the cars vandalised belonged to parents attending a meeting to discuss the issue at a hall on Tower Grove on the evening of February 20.She and other parents believe people opposing their views are responsible.The parents, two mothers and one father, say the atmosphere in the village is bad with people unwilling to express their views because the situation has become so highly charged.

Yesterday they told us


Police investigating tyres that were slashed in a village caught in a 'toxic' row over changes to the local school say the victims do not believe the two issues were linked.


"Damaged tyres victims in Park Lane did not state or believe that they were targeted due to this issue. An investigation is ongoing."It said the force had not been made aware of other incidents of abuse or harassment.

A resident of the street told WalesOnline that they were certain the two issues were not linked.
Two parents with children at the school had originally told us they were.
The original article had a picture of too members of Cymdeithas Yr Iaith (Welsh Language Society) as if they were somehow linked to the allegations it appears to have dispeared from the  Wales Online website.
A almost identical story was covered in the South Waled Evening Post .and credited to the same reporterAbbie Wightwick
Who according to the Wales Online Website

"is an award-winning journalist with more than 25 years experience in newspapers. As well as covering news and features for WalesOnline and all our print titles, she writes opinion pieces on a range of topics. Her column appears every Monday in the Western Mail.

The Western Mail should tells

Why was it decided to place a photo of two members of Cymdeithas Yr Iaith to accompany the article.

If they are reluctant to name they source can they at least prove the existence of "The parents, all of whom have children in the soon to be closed English medium stream " and it did not come from an anonymous source?

To what extent did they contact Dyfed Powys Police to confirm the allegations and ask if those  who tyres had been slashed (which is the only clear part of the story) claimed it was linked to opposition to the changes at the school?

Update apparently the Mule has apologised. 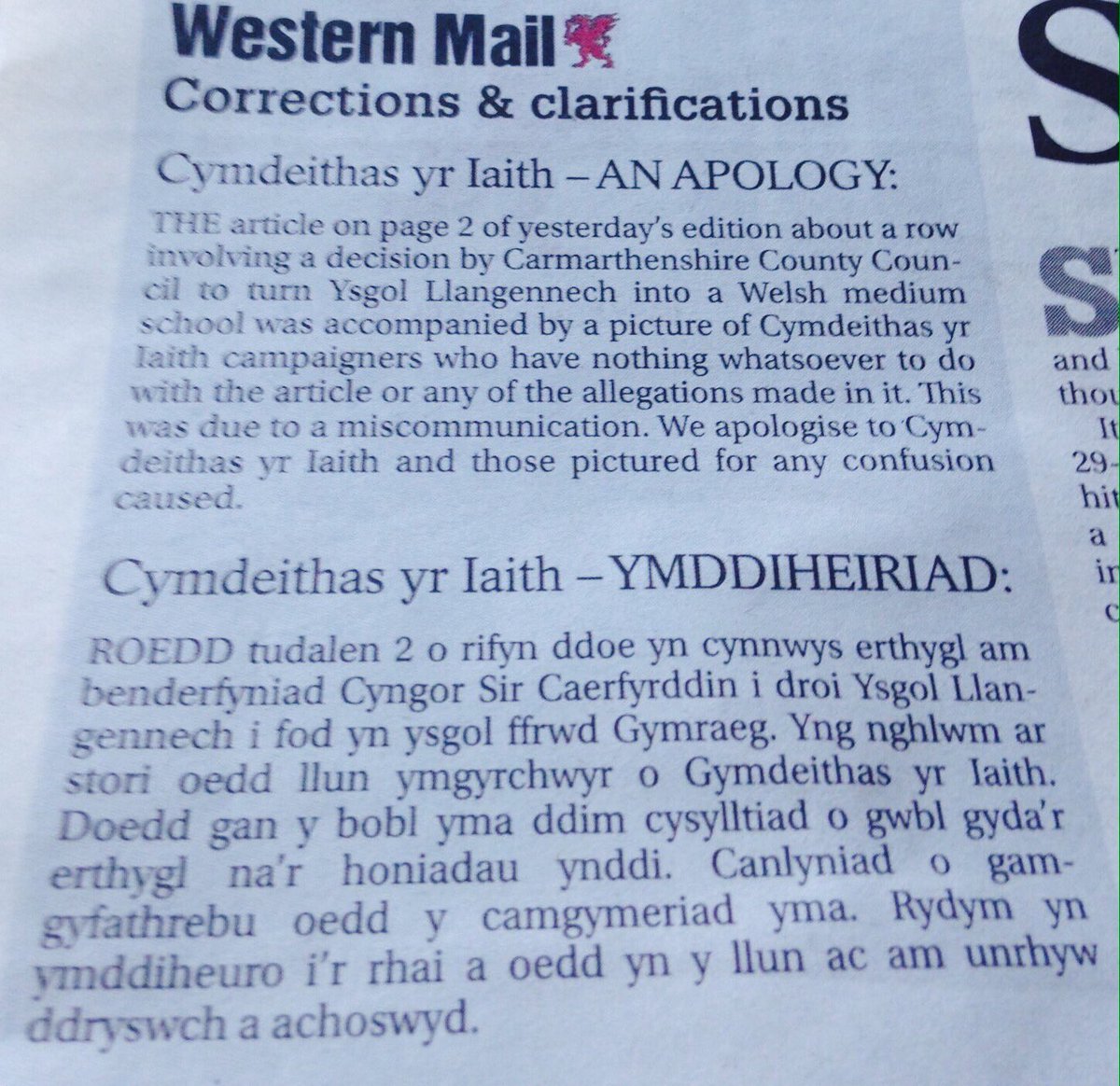 What actually do they mean by  "Miscommunication"?  Surly someone should have understood  the  damage such an interpretation could result from this?

Ah, Abbie Wightwick, that font of knowledge on all things Welsh.