Tories have decided that they can snub Assembly over Brexit.

Surprisingly or rather not the news that UK ministers responsible for farming have been criticised for an "apparent refusal to engage" with the assembly environment committee's Brexit inquiry did not get much coverage
Environment Secretary Andrea Leadsom rejected an invitation to appear before AMs while junior minister George Eustice cancelled at two days' notice.
It even angered Committee chairman Mark Reckless of Ukip  wrote to Mr Eustice saying he was "extremely disappointed" by the cancellation.
The UK government said it was in "regular dialogue" with Welsh farmers.
In a Photo shoot it appears that the only politician Ms Leadson seems to want to engage with 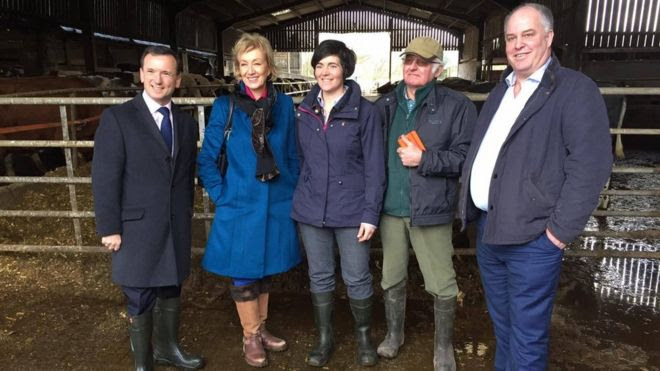 is fellow Tories.
The committee is currently carrying out an inquiry into the future of farming in Wales post-Brexit, and was due to take evidence from Mr Eustice on Thursday.
Given the importance of agricultural and farming policy in Wales, it is vital that AMs and the people of Wales hear directly from Ministers in the UK Government," Mr Reckless wrote.

"Furthermore, ensuring that future agricultural policy is a success in Wales and at a UK level will depend heavily on cooperation and mutual respect between the Assembly and UK Government.
"The Committee's recent experience in trying to engage with UK ministers brings into doubt the UK Government's commitment to that spirit of cooperation and respect."

The letter goes on to say that the committee offered alternative dates and a video conference to both ministers.
Ms Leadsom, who visited south Wales earlier in February, did agree to meet Mr Reckless as the committee's chairman, but "subsequently cancelled that meeting at short notice", the letter added.
Mr Reckless now says he expects "as a matter of courtesy and respect" that Mr Eustice attend a meeting of the committee on 15 February or 8 March, "the only remaining sessions at which we can take evidence for this inquiry".
Plaid Cymru environment spokesperson Simon Thomas was critical of the UK government, saying:

"Given the first hint of accountability for their decisions, Westminster ministers withdraw into their protective shells, far away from Welsh scrutiny."

A spokesman for the UK Department for Environment, Food and Rural Affairs said


: "Although it has not been possible for the minister to give evidence to the committee on this occasion, we are in regular dialogue with the industry in Wales and Welsh farmers and we will be working closely with them on future agriculture policy."

Is this how Wales will be treated, as if it was just a Region of England , that does not have a devolved government,

We know that previously UK farming minister George Eustice has said he cannot guarantee that future agricultural support programmes will be as generous as current EU subsidies.

"What I can guarantee is that...once we leave the EU, we won't be spending that budget on EU membership, and the things that currently we delegate to the EU we will be funding ourselves," he said."The point I'm making is that now we have a new government in place, before we can guarantee exactly the same amount of money, that is a discussion we've obviously got to have with government colleagues.
"I can't do it at the moment, but it doesn't mean it won't happen..


Over six months later should't we  have a clearer idea on what Brexit means for farmers actually for all of us when it comes to  matching EU spending.

The Tory leader in the Assembly Andrew R T Davies a farmer himself was at the Photo Opportunity with  Ms Leadson.

Was he given any reassuring words over his family farming business of anti-EU received EU subsidies totalling nearly £100,000 in a year,will no longer be available.

Perhaps he could inform the Assembly because it is clear his Westminster Bosses , have little intention to do so.

Apparently the majority of welsh farmers voted for brexit - seduced by the leave campaigns bogus promises that westminster would match and continue levels of farm subsidies from the EU and that there were huge new markets out there just waiting for farming produce from wales. Indeed i still chuckle when recalling hearing one leave campaigner telling a group of welsh farmers during the campaign that Uganda offered them the kind of lucrative new trading opportunities leaving the eu would offer them - Uganda has got 20 around million cattle and i don't think the good folk of kampala will be tucking into welsh beef sarnies any time soon.

And it didn't taken long since the referendum result for reality to hit farmers in wales. Within a month of the result the secretary of state for wales was saying eu levels of subsidies for welsh farmers wouldn't be continued by westminster. And in the last couple of weeks rumours of a UK New Zealand trade deal that could flood welsh shops with diary products from new zealand have emerged.

All the protections and benefits the welsh farming industry enjoyed as a result of membership of the eu were stripped away with the leave vote on june 23rd. The fact a majority of welsh farmers voted to leave is a reminder that turkeys do indeed sometimes vote for christmas.

P.S. something like 80 percent of welsh agricultural exports are to the EU single market - a single market the UK is about to leave.