The 1929 election was often referred to as the "Flapper Election", because it was the first in which women aged 21–29 had the right to vote (due to the Representation of the People Act 1928). (Women over 30 had been able to vote since the 1918 election.

Flappers were a generation of young Western women in the 1920s who wore short skirts (just at the knee was short for that time period), bobbed their hair, listened to jazz, and flaunted their disdain for what was then considered acceptable behavior. Flappers were seen as brash for wearing excessive makeup, drinking alcohol, smoking cigarettes in public, driving automobiles, treating sex in a casual manner, and otherwise flouting social and sexual norms

The Election saw Labour become for the first the largest Party by seats (but not by votes)  and Lloyd George's Liberals It stood as the last time when a "third party" non-Labour or Conservative polled more than one-fifth of the popular vote until 1983, the next election thus ushering in five decades in which two-party politics dominated.

This was the first general election to be contested by the newly formed Welsh nationalist party Plaid Cymru.

The election was fought against a background of rising unemployment, with the memory of the 1926 general strike still fresh in voters' minds. By 1929, the Cabinet was being described by many as "old and exhausted".

Whether young women actually made the difference in the vote is aof course debatable In statistics, the phrase "correlation does not imply causation" refers to the inability to legitimately deduce a cause-and-effect relationship between two variables solely on the basis of an observed association or correlation between them.

The next major change in the franchise  the reduction of the voting age from 21 to 16, saw the Conservatives win an unexpected victory , however it was the first election that Plaid Cymru and the SNP  for  every seat in Wales and Scotland respectively and the lowering of the voting age may have boosted thier vote.

The 2021 Parliamentary Elections in Wales Scotland  will see the extension of the Franchise to 16-18 year old, and while i did not suspect it would make amy difference the Exams Fiasco may have a major imput.

Already Plaid are making political capital uit of this and who can blame them?

A petition calling for students to receive teacher predicted exam grades has been signed by 22,000 people.

It was set up after 42% of A-level grades predicted by teachers were lowered by the exams watchdog.

Students wearing masks and holding placards protested against the system outside the Senedd on Sunday. 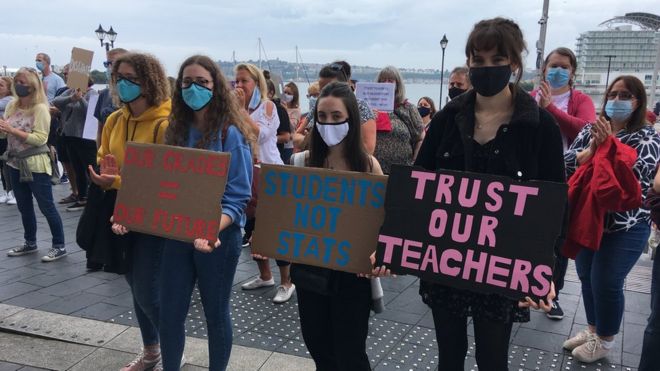 Education Minister Kirsty Williams has confirmed appeals will be allowed if "there is evidence" pupils should have received higher grades.

Plaid Cymru leader Adam Price, who addressed protesters outside the Welsh Parliament, said he was considering legal action against the exam watchdog, Qualifications Wales, and the Welsh Government over the system, which he said had "stolen" young people's futures.

"We can win and must win this fight," he said.

The numbers of 16-19  who have  gained the franchise  may not be large enough to make a difference in the Senedd  elections next year.

But of course they have Parents and unless  the fiasco is sorted out , then they will be vary angry indeed.