Let down by NHS and DWP my experiance.

Prime Minister David Cameron said Wales was witnessing a "national scandal" as Offa's Dyke "has become the line between life and death".

Addressing the Welsh Conservative conference in Llangollen, though its likely that his real target was swing voters in England Mr Cameron said the healthcare workforce were being "woefully let down by Labour".
He criticised Welsh Labour on education and the NHS, saying patients were waiting too long for heart scans.
He said Welsh Labour was guilty of "appalling, inexcusable complacency".


"One in seven people in Wales is on an NHS waiting list," he said. "A cancer drugs fund is in England - but not here.


"I tell you - when Offa's Dyke becomes the line between life and death, we are witnessing a national scandal."
He said families had seen loved ones waiting too long for treatment - and they were "sometimes dying".
"After this utter shambles Labour should never dare call themselves the party of the NHS again," he said.
"Welsh Conservatives are arguing heart and soul that it doesn't have to be this way... with real courage and reform, things can be different


Well I'm one of those on a waiting list  since November  11th and  have  been informed  that my surgery is booked for the 21st Though there's no guarantee it may not been postponed .

I have a recurrence of the Acromegaly which after 20years which have resulted in type 2 Diabetes  and high cholesterol.

But the main side affect this time is a Musculoskeletal disorders which  started over a year ago which has left me in sever pain in my arm and legs particularly my left arm where it becomes very painful if I carry out manual tasks.

It has taken a whole year from the onset of my problems to get fuly diagnosed and finally or  rather hopefully  get the surgery which hopefully will change things.


Last July as my condition was being fully diagnosed I was advised by Local Job Centre that I should apply for Employment Support Allowance and complied and duly been receiving this which saw no change in my  benefits financially.

Although still waiting for the Surgery which hopefully will cure or at least my condition I was called into Work Capability Assessment by the infamous ATOS.

I was not surprised to be told week later that I was no longer assessed as having limited capability for work and if you look at the form below you will wonder who ever will be found so. 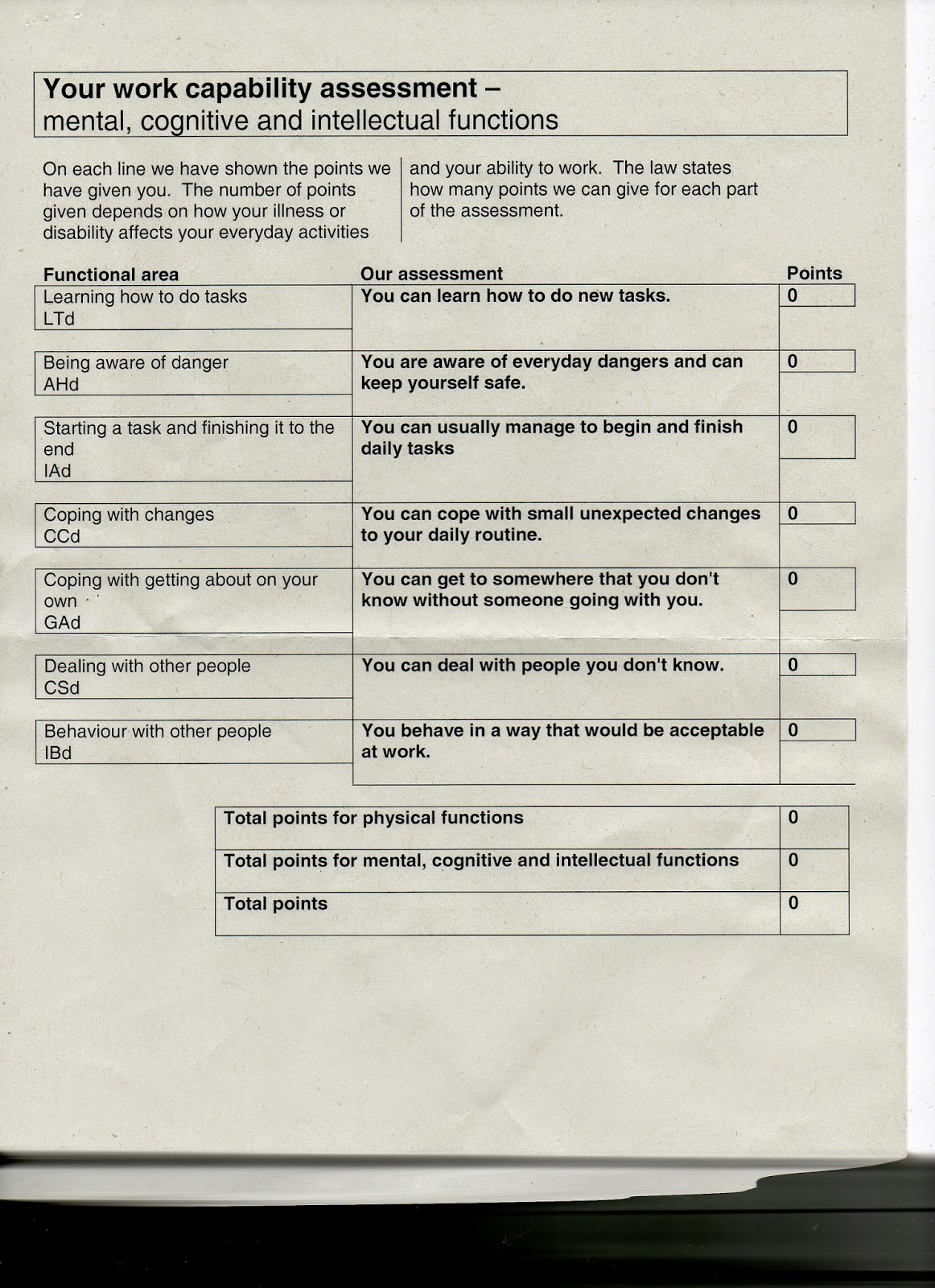 Now I don,t really have a problem with the argument that having an illness or disability makes you incapable of working. Plenty of people with disabilities  do. Though clearly you will have to be very very disabled not to be passed fit for work.

And I found the adviser at the Jobcenter when I rejoined Jobseekers allowance helpful and understanding and I'm not expected to start applying for any Job that is advertise.

And it may well be that I find this more beneficial for my self esteem that seeking a sick note every few months.

But my problem is that I'm waiting for Surgery.

But my problems have been compounded  because just the day after my Jobseekers Allowance assessment I received a Phone call saying my surgery is due on the 23rd of april.

So although I have been told I am not eligible for ESA for 6 months I will need to claim some of benefit for period of hospitalisation.

And of course there's no guarantee  that the operation will go ahead . It is in the Neurosurgery department and  there could easily be some poor person with a life threatening issue who will need far more than I do and therefore my surgery rightly will be postponed  and  I will have to transfer benefits again.

Pressure anyone t whose  facing surgery can do without.

The commonsense move would be for the Job Centre to allow me a fortnights grace  and allow me to sign on as normal in a months time. It would suit me and indeed them in avoiding paperwork in transferring me back and fo in benefits.

But I suspect that's unlikely.

I have been let down by the NHS and the Welsh labour government   and DPW and ther Con/Libdem draconian welfare rules  but fortunately not by friends and family for which I am grateful .

Anyway  I will be back tomorrow but  if this Blog does not appear foe a few days at the end of the Month I will be in Hospital which may be something I will Blog on.