So apart from some minor alterations  the number of Welsh seats in the House of Commons would fall from 40 to 29, with the size of Westminster constituencies increasing.

In Wales it could mean less Labour politicians and the Conservatives almost doubling their number in opposition. Ifan Morgan Jones, a lecturer at Bangor University’s School of Creative Studies and Media, suggested in Wales Labour could win 19 to 20 seats down from 25 with the Conservatives taking six down from 11. Plaid Cymru would get up to three and the Liberal Democrats either winning one or being wiped out.

Its going to resemble a Wife swapping party im which some hapless husbans will find all the Keys have gone and the bowl is empty.

Whilst the media has gleefully reported Labour leader Jeremy Corbyn faces seeing his Islington North seat disappear so he would need to find a new parliamentary home.his rival  for the leadership Owen Smith will have to decide which of the new seats he's going to fight. 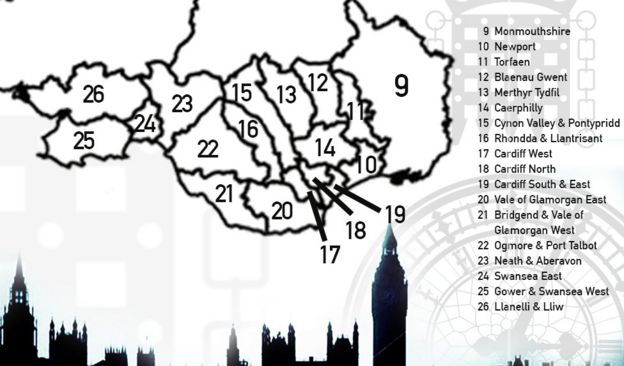 His inclination will be to fight the former, especially as Cynon MP Anne Clwyd is likely to stand down  whereas in the latter he would have to go up ageist fellow MP for the Rhondda Chris Bryant.

But we can wonder to what extent there will be discontent with Smith challenge against Corbyn especially if its a poor showing and seek to replace him.

The Tories will also see major battles for  South Pembrokeshire  a merger of two Tory-held seats, represented by Stephen Crabb and Simon Hart.

One ray of sunshine may be that it will prove to be an end of the Abolition pg yjr Welsh Assembly Campaign as with equal size constituency set in stone  any argument that Wales can be represented at Westminster by just 29 MPs will be ridiculous.

Plaid Cymru's leader at Westminster, Hywel Williams, said Wales "should not disproportionately lose out" in the Parliamentary changes.

"As it stands, Welsh powers are far weaker than those of both Scotland and Northern Ireland," he said.
"Westminster is still responsible for major areas of policy affecting Wales and our nation will have less of a voice if these proposals go through."

But less face it  It will be up to us to win powers what the Toies have done is completely prove Welsh interests cannot be met at Westminster.

Let's face it no one who supports self government for Wales should quibble about these proposals - as the ultimate goal is surely for Wales to have no MPs at westminister. We want matters affecting wales to be determined by our own politicians in our own parliament. If these proposals go through they can only strengthen the case for enhanced powers for the senedd.