If you ever doubted that  you can't trust Labour or  the Wasting Mule take the latter reporting that First Minister Carwyn Jones "has warned that the UK Government will be “discriminating” against Wales if it devolves Air Passenger Duty to the Scottish Parliament but not the National Assembly."
The Welsh Labour leader (Well one of them)  met with Prime Minister David Cameron and newly-appointed Scottish First Minister Nicola Sturgeon (Who is aLeader)at a session of the Joint Ministerial Committee in Downing Street.
Mr Jones said he was told by the prime minister that “nothing is off the table in terms of discussions regarding more powers for Wales for the future”.
However, he was concerned that he did not receive assurances he wanted about the impact on the NHS of a multi-billion pound US-EU trade which is being negotiated.
Speaking moments after leaving Downing St, Mr Jones restated his demand for Wales to be offered the same package of powers – which include full devolution of income tax and welfare powers – as have been recommended for Scotland by the Smith Commission.
So maybe Carwyn and the Mule can answer why in April  2013 when Plaid Cymru MP Jonathan Edwards tabled an amendment to the UK Government’s Finance Bill in a bid to speed up transfer of control of Air Passenger Tax to the Welsh Government.
Pointing out that devolving the airport duty is one of the recommendations of the recent Silk Commission Report. Mr Edwards is urging Labour MPs to support his amendment.
He said

The UK Government-sponsored Silk Commission in its first report recommended the full devolution of minor taxes such as Airport Duty, Aggregates tax, business rates, landfill tax and Stamp Duty, in addition to a tax-sharing arrangement for income tax.
There are three important reasons why the Welsh Government should be empowered with fiscal powers as advocated by the Silk Commission.


So ow many Welsh MPs suppoted the  Amendment ? Welsh not British provided us with the answer 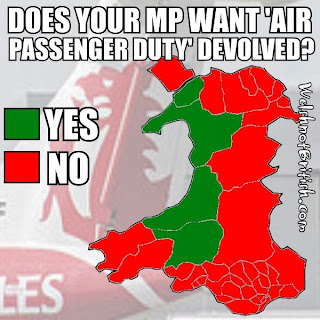 Only Four MPs bothered to support this the three Plaid and one Liberal Democrat.

Not one Labour MP in Westminster and now Carwyn "has warned that the UK Government will be “discriminating” against Wales if it devolves Air Passenger Duty to the Scottish Parliament but not the National Assembly."

Or the simple fact that Carwyn has no real say in how Labour really wants Wales to be treated equally with Scotland.

Is it not time we had clarity on who leads Labour in Wales, Carwyn Jones or Owen Smith?

How much longer can we have one in Cardiff Bay coming up with one Policy and another in Westminster doing exactly the opposite?

In the meantime, I take every utterance from Labour about Wales being treated equally with Scotland wit a pinch of salt.