We are going to have to prepare to extend the Firebreak.

As we enter the second week of the "Firebreak" Lockdown for some parts of Wales, it seems likely that they will have to endure heavy restrictions after November 9th.

Merthyr Tydful , Caerphilly, Swansea  Cardiff and Rhondda Cynon Taf , are all experiencing  a large  ammount of cases , but clearly the whole of Wales is facing a major crisis 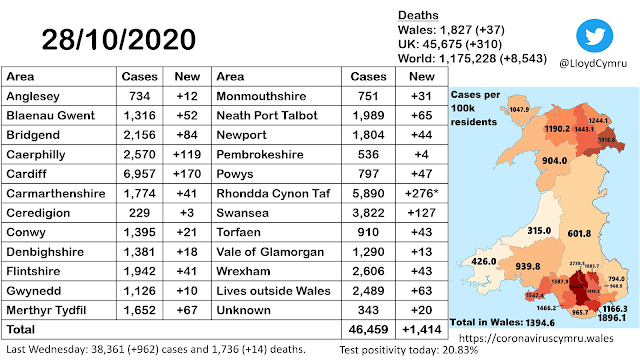 There has been a dramatic rise in Covid-19 case rates in Rhondda Cynon Taf, in the latest figures published by Public Health Wales.

The BBC report that

Nearly 800 people were tested in a single day - and a third of those tested positive.

Parts of the Cynon Valley over the past week have shown up as hotspots, with Penrhiwceiber eclipsing student areas of Cardiff for its case rate.

Council leaders have called the weekly rise a "great concern".

They do not expect to see improvements until the weeks after Wales comes out of the firebreak lockdown on 9 November.

There were a further 276 positive cases reported in RCT on Wednesday, with the case rate in the county having risen by 458.9 cases per 100,000 people over the past week.

RCT council leader Andrew Morgan said the cases announced on Wednesday were "exceptional" and were from people who picked up the virus over a week ago and had only just tested positive.

But he tweeted that the rise in the past week or so had been a "great concern". 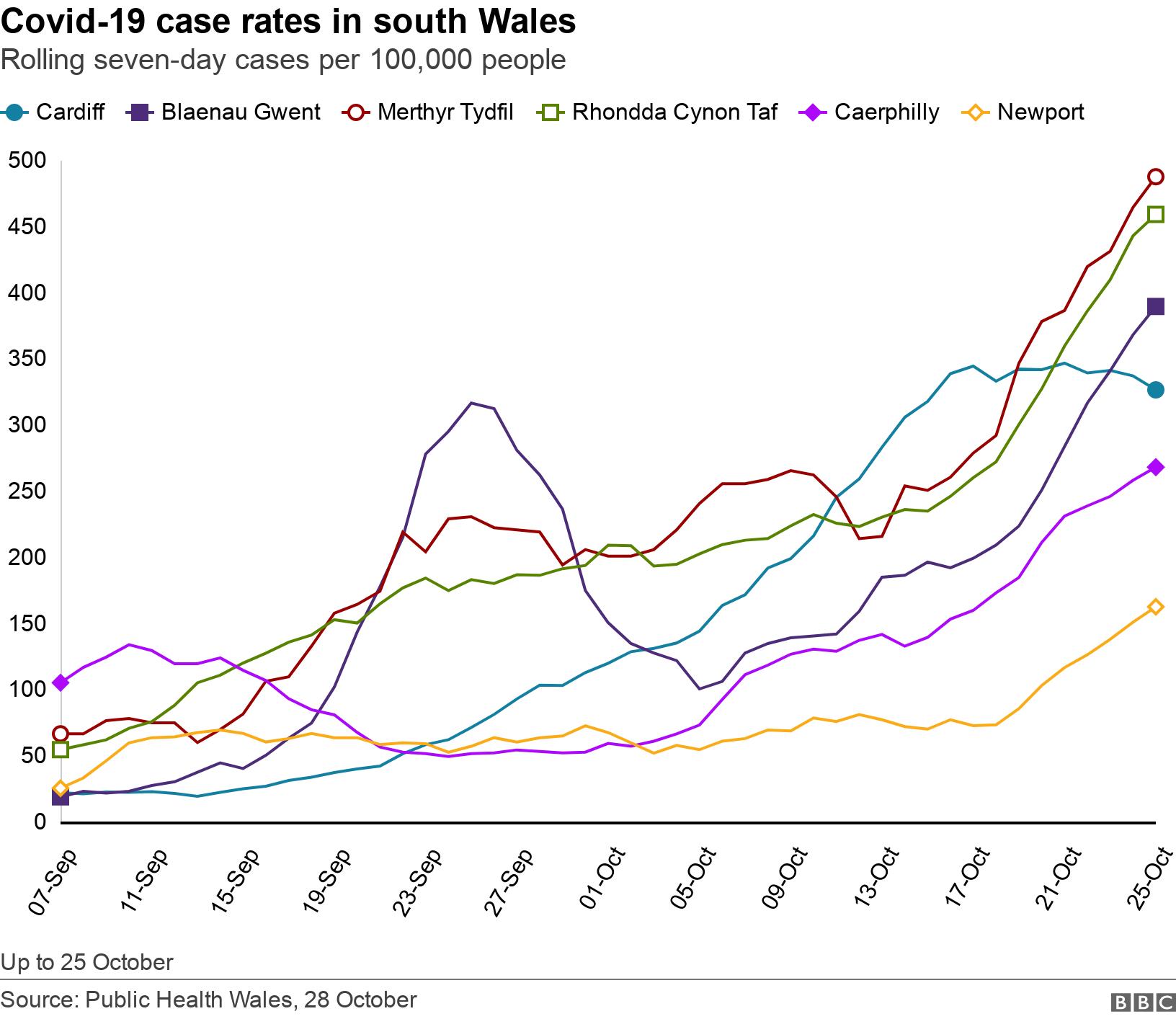 Merthyr Tydfil is even higher on more than 487 cases per 100,000, with a particular hotspot on the Gurnos estate.

It came as PHW also reported 24 deaths across the Cwm Taf Morgannwg health board area - which includes Merthyr and RCT. - most occurred over the past seven days.

Highest rates in the Cynon Valley

There have been 92 cases in the past week in Penrhiwceiber in the Cynon Valley.

Abercynon, Mountain Ash and the northern part of Aberdare are also high. Tonypandy East (655 cases per 100,000) is also in the worst 10 local areas of Wales outside student areas.

Health officials in Wales have also been closely looking at positivity rates as one of the indicators of how infection is progressing.

In May, the World Health Organization (WHO) advised governments that, before easing lockdowns, the proportion of test results which come back should remain at 5% or lower for at least two weeks.

In Wales, that proportion of positive tests has increased sharply since August - in three of the areas with the highest positivity rates, they have reached 20% or more.

The Wales average for the most recent seven days is nearly 16%.

RCT, Merthyr Tydfil and Cardiff have been particularly high, at 20% or more.

Only Pembrokeshire has been below the WHO threshold.

With numbers as they are , it is  imperative thet the FIrst Minister holds his nerve and if he seems it necessary  , carry out a seconf "Firebreak" though maybe in a reformed way.

What will be important is that we get behind it and the "Welsh " Tories in particular  we shoulf have no more of this .

Andrew RT Davies
@AndrewRTDavies
· Oct 27
Dictating whether you can buy a hairdryer might be a socialist’s wet dream, but for many people in Wales it’s turning into a living nightmare. My article in today’s @timesredbox. 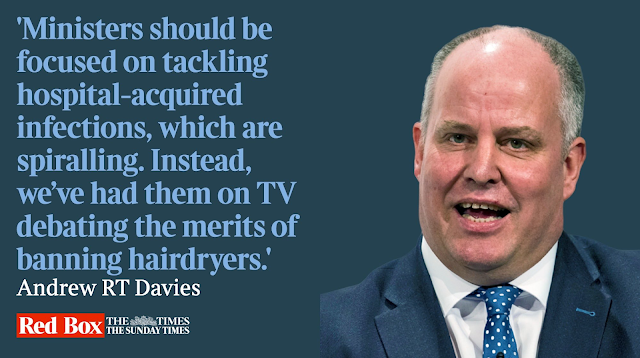 Mr Davies should perhaps be informed that a misuse of hairdryers can lead to damage and hair loss. Oh!

The aim of all Welsh politicians should be slow Covid 19 until we get a workable vaccine , which is far off.

If it means that we are under some form of Lockdown over Christmas  so beit.

Certainly the leader of the Liberal Democrats Sir Ed Davey MP saying on BBC Breakfast that the Government needs to come up with a coronavirus Christmas strategy across all four UK nations is not helpful .

Hang on maybe if Nicola Sturgeon was in charge of the strategy it might just work , but the thought of Boris Johnson , relaxing the rules so his fellow Tory MPs can have a "Good" Christmas leaves me cold.

It is going to be hard, though I reckon this Tweet is not far off the mark

Ben Curtis
@DrBCCurtis
I reckon it's not too far wide of the mark to say that the Venn diagram of 'people who invoke the stoicism of the supposed Dunkirk / Blitz spirit of WWII' & 'people who are complaining about measures intended to keep the population safe during a pandemic' is pretty much a circle.
11:51 AM · Oct 25, 2020·Twitter Web App