La Pasionaria (Kirsty Williams) to stand down from Senedd.

So sole Welsh Liberal Democrat Senedd member and Education Minister Kirsty Williams has announced she is stepping down at next May's election.

Ms Williams is the only Lib Dem in the Welsh Parliament and has represented Brecon and Radnorshire since the then Assembly first met 1999.

She said she was "looking forward to spending more time with my family".

"There is, of course, sadness in making this decision, but also with a sense of achievement and pride," Ms Williams said.

She said she had taken the decision "after a great deal of thought and reflection". 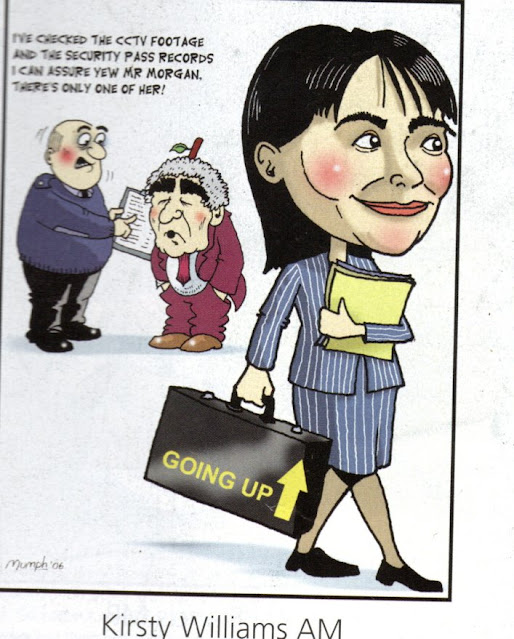 On the opposition benches she was one of the most effective , to the extent that I nicknamed her La Pasionaria especially when it came to the NHS and Education.

However the Mumph carton has proven prophetic as there is only one of her and without any colleagues chances of  getting called to speak would be small.

So Ms Williams is in Labour First Minister Mark Drakeford's cabinet, in a continuation of a deal originally agreed by previous Welsh Labour leader Carwyn Jones following the 2016 election..

She has an undoubtable personal  following in her constituency

vote share are compared to the 2017 general election, not the 2019 by-election.

Based on the last Welsh polls here are the figures for the constituency ballot (with changes in support since June once again indicated in brackets):

And fo the region

Abolish the Assembly: 4% (no change)

An astonishing result which could see the Liberal Democrats with no Parliamentary seats in neither Westminster nor Cardiff.

Of course Ms Williams may be considering running for Westminster but that will not  be Thursday 2 May 2024, in line with the Fixed-term Parliaments Act. and three years without a platform may see her personal  following fade.

.."leave an enormous hole - not just in the Welsh Government but in the Senedd and in Welsh political life".

"She was a formidable politician in opposition but she has demonstrated her real strength has been in putting into practice the progressive policies for which she has long argued," he said.

Paul Davies, Conservative leader in the Welsh Parliament, said she had been a

"tireless champion of her constituency and a passionate and formidable politician over the last two decades."

"Her contribution to the Senedd has been significant, not least in the legacy she will leave in ensuring women's voices were heard clearly from the outset, and all this whilst raising a family - certainly no mean feat!"

Political Obituaries , are nearly always praiseworthy , but in the case of La Pasionaria (probably the last time I use it) it is heartfelt.