17 days of Drakeford being wrong V months of Johnson corrupt, and inept government.

I must admit I still Mark Drakeford rules banning shops selling non-essential items during Wales' firebreak lockdown are mistaken and should be reversed,.

On Sunday afternoon, Mr Drakeford said the implementation of the rules may be tweaked, but the "basic decision" behind the ban was the right one. petition on the issue has exceeded 60,000 signatures, making it the largest ever submitted to the Senedd.

Although I accept the reason for the ban,  i am not sure it was a wise decision especially as it has given Unionists politicians over the boarder an excuse however lame to atack the Senedd and devolution. Even though it was  something that apparently the Tories wanted ,

Though there is still a strong argument that it encourages people to do the intended essential shopping and not to spend more time in the stores browsing.
But it has led to sheer hypocrisy from the Tories. Witness this from MS Darren Millar. 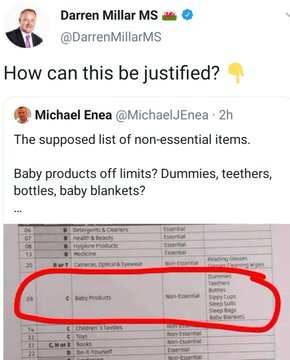 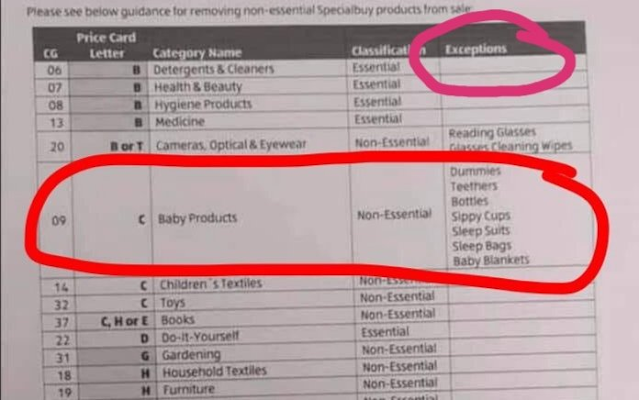 But then again maybe it was deliberate move to mislead.

In an interview with BBC Wales, Mr Drakeford said:

"The position we face in Wales is really and deeply serious and for these two weeks we are asking people to stay at home and not to mix with other people as much as they can.

"If the rules are not sensible rules, if there are anomalies that are emerging, we will put them right, but the basic underlying public health emergency has not gone away.

"The basic decision is the right one. If the implementation of it, the interpretation of it needs to be revisited to make sure the rules are sensible, then we will do that.

"Non-essential goods are not allowed to be sold over the next two weeks. That's why there are hundreds of shops the length and breadth of Wales are closed. The underlying issue is not about shopping, it is about saving lives."

Mr Drakeford said a review into how the rules have been implemented would be held on Monday.

Clearly it would be difficult for Mr Drakeford to back down completely as it would portray him as week.

Rather than praising him for listening  the Tories would claim victory  and probably also claim  that we should be following Boris Johnson's plan even though it  more disastrous than that of the Welsh Labour Government.

Personally I am  prepared to face  17 days of Mark Drakeford making, what may be the wrong call, than months of Johnson corrupt, and   inept handling.