Forcing on Cymru "Music we don't Like" and we pay for it.

This week MPs voted 340 to 256, majority 84, in favour of the United Kingdom Internal Market Bill at third reading, despite warnings that the “law-breaking” legislation threatens the Union and the country’s global reputation.
The Minister for the Cabinet Office and Chancellor of the Duchy of Lancaster addressed MPs in the Commons on Thursday to update the House on all matters Brexit and coronavirus-related. But when confronted by SNP MPs in the House on the strength of the Union, Michael Gove was forced to shut down all calls for an independent Scotland in a fiery outburst. SNP MP Tommy Sheppard (Edinburgh East) asked whether the Cabinet Office undertakes opinion polling in Scotland into attitudes towards the Union and if the Government would publish the research "since it is paid for by the taxpayer".

Responding, Cabinet Office minister Michael Gove said: "It is the case that Government does undertake research and that research reinforces to us the vital importance of serving every part of the United Kingdom effectively.

"The research that we undertake, for example, reveals that across the UK people believe that it's vitally important that governments work together in order to deal with the current COVID pandemic and I think it is important that the good co-operation we've recently enjoyed with the Scottish Government continues."

SNP MP David Linden (Glasgow East) asked how much money had been spent on the polling, adding that Mr Gove was behaving like a "slippery fish" in avoiding the question.

He said: "Given that all public polling shows that there's an increase in support for Scottish independence, isn't it correct that support for the Union is actually pretty weak at the moment and it's only a matter of time before Scotland becomes and independent country?"

But Mr Gove hit back: "Talking about fish, slippery or otherwise, one of the benefits of leaving the European Union is that we're taking back control of our territorial waters.

"And as a result, as the Scottish Government pointed out, it will be the case that there will be hundreds of thousands of new jobs and millions of pounds of investments in the north-east of Scotland as a result of leaving the European Union.

I leave it to you to judge just who is a Slippery  Fish but the whole power grab issue has brought back the argument of Quebec politician Jean-Martin Aussant .who sums the whole issue of  there thus.

"Imagine you have $50 to buy music you like. Your neighbour takes the $50, and promises to give you back $55 worth of tunes.
"What he doesn't tell you is that it's music you don't like -- and there are $25 in administrative fees," Aussant tells viewers. "So you started off with $50 and you ended up with $30 worth of music you don't even like.
"That's Canadian equalization. We need to face the facts: We'd be better off keeping our money and choosing our own music."

It's perhaps an argument that we should be putting forward in Wales, especially as it is clear that we could easily face another Tryweryn..

In 1960, a private bill sponsored by Liverpool City Council was brought before Parliament to develop a water reservoir in the Tryweryn Valley. The development would include the flooding of Capel Celyn. By obtaining authority via an Act of Parliament, Liverpool City Council would not require planning consent from the relevant Welsh local authorities and would also avoid a planning enquiry at Welsh level at which arguments against the proposal could be expressed. This, together with the fact that the village was one of the last Welsh-only speaking communities, ensured that the proposals became deeply controversial. Thirty-five out of thirty-six Welsh Members of Parliament (MPs) opposed the bill (the other did not vote), but in 1962 it was passed. The members of the community waged an eight-year effort, ultimately unsuccessful, to prevent the destruction of their homes.

Almost unanimous Welsh political opposition had failed to stop approval of the scheme, a fact that seemed to underline Plaid Cymru's argument that the Welsh national community was powerless.[ At the subsequent General Election the party's support increased from 3.1% to 5.2%

Of perhaps greater significance, however, was the impetus the episode gave to Welsh devolution. The Council of Wales recommended the creation of a Welsh Office and Secretary of State for Wales early in 1957, a time when the governance of Wales on a national level was so demonstrably lacking in many people's eyes. By 1964 the Wilson Government gave effect to these proposals.

However it took nearly 40 years for Wales to get its own legislature and in capitulating  over the power grab Mark Drayford  has opened the door for the Tories to build anything in Wales weather we want it or not. 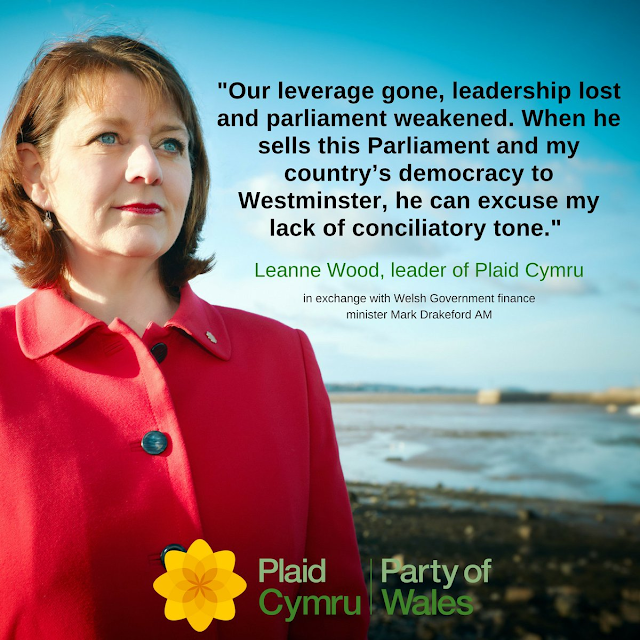 It's only a few months that the Assembly was renamed as the Senedd/ Parliament in order to give i a further semblance of authority.

At the same time Labour capitulated and will now Senedd Members and some Welsh MPs be jumping and screaming as the Tories bypass them and push projects that suit  and maybe England them and not Wales.

The only way out of this can only be Independence as Westminster will never stop taking our money and forcing on us "Music we don't Like".