Test and Trace seems to be run by a Mini-Cab company.

I say form because although the 240,000 people living in Rhondda Cynon Taf (RCT) will have restrictions imposed on their daily lives it is not the same as before .

From 18:00 BST on Thursday, people will not be able to enter or leave the area without a reasonable excuse, such as travel for work or education.

All licensed pubs, bars and restaurants will have to shut by 23:00 every day, once the lockdown comes into effect.

Though I fail to see how this will prevent any rise in outbreaks  as most people would have attended the pub by then.

People will also be banned from meeting people outside their own households indoors.

Health Minister Vaughan Gething said there had been a "rapid" rise in cases, with 82.1 infections per 100,000 people over the past seven days.

It is the second local lockdown in Wales, after Caerphilly county borough was made subject to restrictions last week.

A trip to Doncaster was said to be associated with one of the clusters of cases in RCT.

Though a statement on Wednesday evening from the Welsh Government clarified the party did not attend the races being held in the South Yorkshire town, as part of a pilot event for 2,500 people.

Though Doncaster Racecourse has confirmed it had no ticket bookings for any groups from south Wales for the event.

"Doncaster Racecourse has received no contact from any organisation, including the NHS or the Welsh Government, to verify the attendance of any individuals at last week's event for the purposes of track and trace," it said.

The emphasis on the Cluster being put down to clusters associated with "Club CUlture" seems to some extent a measure to place the blame for the surge in case on working class people rather than the failure of the Welsh and Westminster  government after six months of Lockdown measured to put i place an effective  Tack and Trace.

Those of us are familiar with calling a Mini Cab  company  who frustrated , that it has not arrived ring them back to be told "it's was  five minutes away" , twenty minutes later you ring again to be told "its just turning into your street"

Covid testin seems to be run in the same way.

Though up to five extra mobile testing units will be deployed to Covid-19 hotspots in Wales this week, Wales' Health Minister Vaughan Gething has said.

He said extra lanes at drive-through centres and tests processed at a Welsh laboratory were also being considered.

People trying to get tests have spoken of their frustration over the length of time to book and distance to travel.

GP and Plaid member of the Senedd (MS) Dr Dai Lloyd has called on Mr Gething to "get a grip" on the issue.

He told Claire Summers on BBC Radio Wales the health minister had "opted into this UK system" so "can't say 'it's not my fault, it is all down to UK'."

The large private sector Lighthouse Laboratories which analyse test swabs from all the UK nations have been under strain to process them all.

But Mr Gething said that Wales would not stop using Lighthouse Laboratories: "I think dynamiting the system and thinking we can start again within a few days... I don't think that would be sensible at all... we don't have the additional money."

He's probably right , though it indicates that the current system is not fit for purpose , and if he had the choice he would not now have relied on the Westminster system. an urgent discussion about how quickly issues would be resolved.

He said issues with testing were "a point of real frustration for people across Wales and indeed other parts of the UK", adding: "We're already looking at what we can do with our own testing resources here in Wales".

He told Radio Wales he and the Scottish health minister had jointly written a letter to UK Health Secretary Matt Hancock asking for an urgent discussion about how quickly issues would be resolved.

The UK government's testing system - part of its test, track and trace operation which Prime Minister Boris Johnson promised would be "world-beating" - has faced criticism in recent weeks.

A surge in demand for coronavirus tests has led to local shortages, with many people reporting problems with getting online bookings and being directed to test sites hundreds of miles from their homes.

On Monday, one testing site in Abercynon, Rhondda Cynon Taff, reportedly ran out of kits.

An official at the site told BBC Wales it had closed for a few hours while they fetched more tests from Swansea.

'It's someone else's fault'

Dr Lloyd, who is chair of the Senedd's health committee, said he was "extremely concerned because we seem to seeing a resurgence now of the virus".

"We're running out of testing kits in a situation that is run by private companies that have no link to the NHS," he said.

He added: "It's a very complicated new private system overlaid on top of our usual NHS provision…

"Its impossible as opposition politicians to scrutinise exactly what's going on because everyone says it's someone else's fault."

Tests by authorised date and source 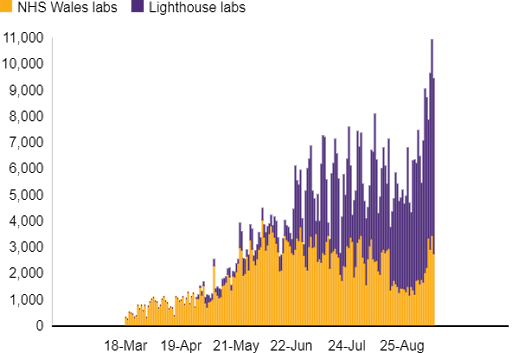 How many tests are being carried out in Wales - and how quickly are results coming back?

A Welsh Government spokeswoman said: "The problems people have been experiencing when trying to book a test are directly related to the ongoing UK-wide issues with the Lighthouse Lab system, which we urgently need to see resolved at a UK level.

"The health minister [in Wales] has repeatedly raised this with the [UK government's] secretary of state for health.

"We are moving as much NHS Wales testing capacity as we can into areas where testing is needed the most, as well as taking urgent action to switch over testing facilities to Welsh laboratories to further increase capacity while the UK government resolves these issues with the Lighthouse Lab system."

Whilst I accept people should  take some responsibility whether it's going on a pub outing or gathering on a grouse shoot. The solution to the problem is clearly not on relying on people being sensible , but on Testing and Tracing something which was evident from the very beginning.

Why have we failed to meet targets? It is not enough to say it's on its way.