We should be careful not to furnish hostility, but local needs come first.

Four councils in north Wales are to go into local lockdown in a bid to tackle the spread of Covid-19.

People will not be able to leave or enter Conwy, Denbighshire, Flintshire, and Wrexham unless they have a "reasonable excuse" such as work or education.

They are the same restrictions as seen in most of south Wales, where lockdowns cover 11 different areas.

The new measures will come into effect at 18:00 BST on Thursday.

It will be illegal to meet others indoors who are not within your immediate household.

it has led to t he First Minister has called on Prime Minister Boris Johnson to ban people from travelling to Wales from coronavirus hotspots in England.

Unlike in Wales, where people in areas in local lockdown are banned from leaving the county without a reasonable excuse, in England there are no such restrictions.

This means that people in Bolton in Greater Manchester, which in a local lockdown and had 231 cases per 100,000 people in the last week, are able to travel to Ceredigion or Pembrokeshire on holiday whereas people in Newport, Gwent, which has 50 cases for the same number of people, can not.

When WalesOnline questioned Welsh Government minister Vaughan Gething at Monday's press conference he indicated there were no plans to restrict people coming into Wales from English Covid hotspots.

Surely if people in a local area are now restricted in movement  and  prevented from leaving that area  then at the same time people should have restrictions on entering that area.

If you are in a hotspot you can obviously  become affected and knowingly or unknowingly carry it in to another area, but equally you can enter a hotspot and

n hot only become infected and carry it out  or be already infected  and make the issue worse.

We must become careful of blaming outsiders whether its from within Wales. England  or indeed students  and creating an hostile environment.

But as Ceredigion which as seemingly manged to contain the pandemic better than others the sudden spike  is clearly linked to the University at Aberystwyth. 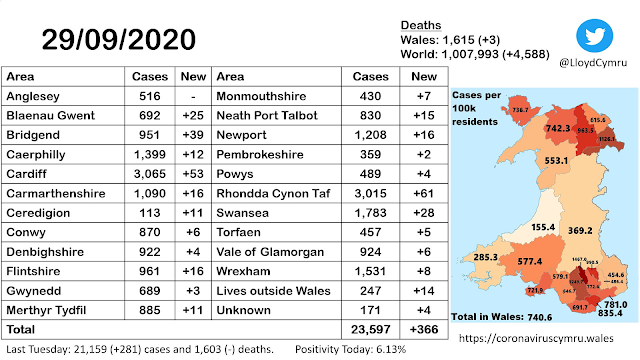 You don't need to be an expert to realise that the influx of thousand pf students arriving back at University to see that some may well be Covid carriers  and that would see cases appearing on campus  and in the area.

There is a strong argument that part of the reason to open the Universities was a financial one , but  it it would be impossible  to send them all back home to be tutored online.

The problem now is a Town and Gown argument  in whether the Students are following strict guidelines  or  meeting in large numbers and increasing infection rates.

The potential of a bitter resentment on both sides is worrying and we need to get a grip and prevent it.