Pork Barrels and patronage. Is Mrs May the most corrupt PM since DLG?

Pork barrel is a metaphor for the appropriation of government spending for localised projects secured solely or primarily to bring money to a representative's district. The usage originated in American English. In election campaigns, the term is used in derogatory fashion to attack opponents. However, scholars use it as a technical term regarding legislative control of local appropriations. 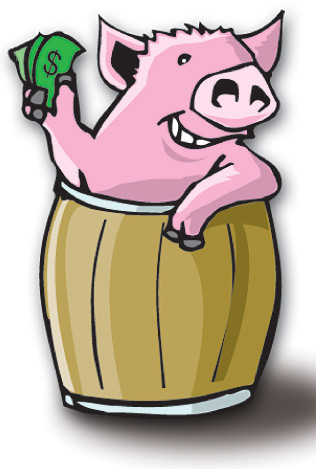 You can argue that all governments do it, send money to the constituencies that  have MPs they support the sitting government , but Mrs May has taken the system to even more shameful,levels ever since she took office as Prime Minister .

First she  promised  the Democratic Unionist Party £I billion  to Northern Ireland by Theresa May to secure its support after the general election, and secure her fragile majority.

Then Mrs  with the rescheduled meaningful vote looming three backbench Tories have been appointed to the Privy Council: Philip Dunne, Roger Gale and Edward Leigh. and a knighthood to the likes of  to John Hayes, a right-winger who prospered when Iain Duncan Smith was Tory leader, held ministerial posts under David Cameron and who "questioned" the prime minister's Brexit deal.

Now the The Times reported on Thursday that the government is looking at encouraging more Labour MPs to vote its way by offering money for deprived areas of the U.K. that voted to leave the EU. A government official said something on these lines is under consideration.
Such a move would be controversial. Anna Turley, a Labour MP who represents Redcar, a leave-voting district in the northeast of England, accused ministers of offering “bribes and sweeteners” to her colleagues.

May’s spokesman James Slack denied the proposal would amount to cash in exchange for votes.
“The prime minister has a long-standing commitment to tackle inequality between communities,” Slack told reporters in London. “No community should feel that they are left behind.”
Left Foot Forward  report that

"The MPs she will have in mind are some of the 14 who rebelled against the Labour leadership to help defeat the Cooper-Boles amendment on Tuesday.
Most of these MPs represent Leave-voting constituences, many of them poorer than average and several former coalfield communities.
After decades of under-investment, even a vague offer of a cash injection may seem tempting.
But after eight years of devastating government cuts to these areas’ local council budgets, talk of a last-minute bribe is insulting.One of the areas likely to be targetted will be Jarrow in South Tyneside whose MP Stephen Hepburn voted against the Cooper-Boles amendment.
The government has cut £156m from South Tyneside Council’s budget since 2010.
So Jarrow’s residents have had to pay more council tax for less services in order to make up for the government’s cuts. It will have to be a huge cash injection to make up for that.
After eight years of paying more and getting less because of May’s governments’ policies, should a vague promise of a “cash injection” sway Jarrow’s MP?Other MPs who will be targetted, if Theresa May is serious about this offer, are Gareth Snell, Ian Austin, Graham Stringer and Sir Kevin Barron. They all voted against the Cooper-Boles amendment.
The areas they represent have also suffered severe cuts in services. Since 2010: Snell’s Stoke council has had its budget cut by 24%, Austin’s Dudley by 29%, Stringer’s Manchester by 17% and Sir Kevin Barron’s Rotherham has had to cut £177m.
Of course, all areas have been damaged by austerity, to a greater or lesser extent. Yet only a tiny few will benefit from any cash injection.If Jarrow gets investment, what about neighboring Gateshead? Or all the other communities which need investment?"

Indeed  Mrs May could well be breaking electoral Law  and neighbouring constituencies, that did not have a Labour MP  prepared to accept such a bribe  will be heading to court
The man acknowledged as the crown prince of political honour-mongering was David Lloyd George, who told one political rival in 1920 that he regarded the sale of titles as "… the cleanest way of raising money for a political party".
The First World War produced such bizarre political times that Lloyd George was a political leader without a political powerbase.
He had to raise funds for his own party and, to a lesser extent, his own pocket, because he was not a wealthy man.
As an agent of these sales, he employed John Maundy Gregory, one of the most unappetising characters in a rich stew of misdeeds.
Maundy Gregory, son of a vicar, from Southampton, traded honours in London's clubland, creaming off enormous shares for himself and lining the pockets of both the main parties in Lloyd George's political coalition, the Unionists and the Liberals.His price list varied from £80,000 to £120,000 for a viscountcy to £10,000 to £15,000 for a knighthood. As an example, £10,000 in 1922 would be worth £363,000 today using the retail price index.
Lloyd George came under a furious attack from Conservatives in the House of Lords, but was able to buy the silence of the press by handing out titles to proprietors.
Lloyd George was not interviewed by the police.
After he lost power, the political pressure for reform was expressed in a Royal Commission which led to the Honours (Prevention of Abuses) Act 1925.
So the question is, Is Mrs May breaking at the very least the spirit of the above act?
Of course post-brexit Mrs May could well retrospectively make her clear form of bribery perfectly legal.
But she may well go down to one of the biggest abusers of the patronage system and Pork Barrel System in modern times.