Surrey Council catches a cold whilst others are in intensive care, Guess who gets the medicine?

I suppose it will be called Surreygate or rather not.
Because the Media sem to have gone rather quiet over Jeremy Corbyn accusing ministers of agreeing a "sweetheart deal" to ensure a Tory-controlled council dropped plans to raise council tax by up to 15%.
In PMQs, Yesterday labour's leader read out what he said were leaked messages showing Surrey council's leader negotiating with the government to call off a referendum on the rise.
On Tuesday, Surrey County Council restricted the increase to 4.99%, so a referendum was no longer needed.
It said "no deal" had been offered.
Downing Street said all conversations between the government and Surrey had been "entirely appropriate" and there was no "sweetheart deal".
Later, the government said Surrey had asked to take part in the pilot of a new business rates scheme.
The proposed 15% rise was mooted by Surrey Council to cover what it said were shortfalls in funding to cover the rising costs of social care.
But plans for a referendum - which are triggered if a local authority proposes a council tax rise of 5% or more - were dropped during a full council meeting on Tuesday. Councillors will now consider an alternative budget.
Surrey is of course a Flagship Tory Council  and the idea of them loosing it would be even more earth shattering than Labour loosing a Valleys council to Plaid.
Indeed After the elections of May 2013 the County Councillors' party affiliations are as follows:
As of 3 May 2012, the Conservative local councillors control of 10 out of 11 councils in Surrey, with Epsom and Ewell in Residents Association control. The Conservatives hold all 11 Parliamentary constituencies within the county border

The idea of the Tories l loosing it to anything not right of centre  would be even more earth shattering than Labour loosing a Valleys council to Plaid.

Since the latter has happened you can imagine the prospect of such a revolt sent a sharp increase"set alarm bells ringing" in the government, .
But it is clear even Surrey are facing huge problems as a result of government cuts.
If they can't cope how can any other council with areas of depredation cope?
In the Commons Mr Corbyn said he had seen leaked text messages intended for a Department for Communities and Local Government official called "Nick" from the leader of Surrey County Council, David Hodge.
Mr Corbyn said:

"These texts read, 'I'm advised that DCLG officials have been working on a solution and you will be contacting me to agree a memorandum of understanding.'" 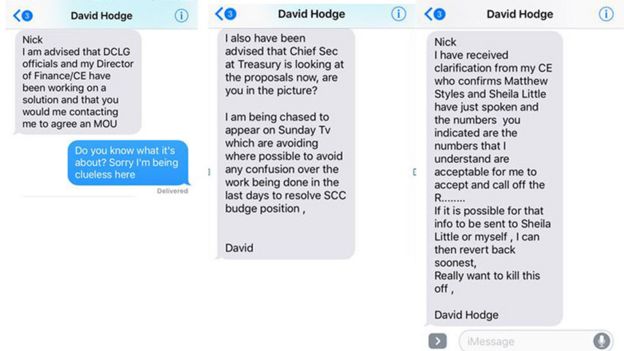 "Will the government now publish this memorandum of understanding and, while they're about it, will all councils be offered the same deal?"

"But there was a second text from the Surrey County Council leader to Nick - and in the second text it says, 'The numbers you indicated are the numbers I understand are acceptable for me to accept and call off the R.'
"Now, I've been reading a bit of John le Carre and apparently R means referendum. It's very subtle all this."

"He goes on to say in his text to Nick 'If it is possible that info to be sent to myself, I can then revert back soonest, really want to kill this off.'
"So how much did the government offer Surrey to kill this off and is the same sweetheart deal on offer to every council facing the social care crisis created by this government?"

I imagine frantic efforts on behalf of the Tories and thier media friends to avoid this becoming a fullblown scandal.

The council, and ministers, denied there had been any stitch-up.
But hours later the government admitted they had agreed, in theory, that Surrey Council could, like several others, try out keeping all of the business rates they raised from 2018, which could plug the gaps in funding in future.
That change is due to be in force across England by 2020. Technically therefore, Surrey Council has not been offered any additional funding. But the prospect of more flexibility over their own income in future could help fill the council's coffers and seems to have eased some of their concerns.
But as a solution to easing the pressure on social care across the country now, the idea could fall far short.

The Question is if it had been a council controlled by any other Party would the Tory Government even bother to appease them?

Surrey may have caught the equivalent  of a Cold due to the cuts, whilst some UK councils are in intensive care.

Yet when the former complain about their treatment it is they who get the extra medicine.