Plaid recently held a meeting over the push to make the City Deal for the Cardiff Capital Region a reality .
Prior to the meeting i led to an attack on Plaid Cymru leader Leanne Wood by Rhondda Cynon Taf council leader Andrew Morgan, who chairs the City Deal Shadow Cabinet, said he and his officials had “absolutely no engagement or contact” with Ms Wood during the last 18 months.

On Monday Plaid held a public meeting on the city deal alongside some of the Partys big guns AMs Adam Price and Steffan Lewis.

Mr Morgan accused Ms Wood of taking a “sudden interest” in the city deal, which it is hoped will result in £734m invested in the Metro transport scheme, with £495m going on other projects.

“I was astonished to see that the Rhondda AM and leader of Plaid is convening a meeting to talk about City Deal; I would be curious to know what Leanne can tell anyone about the City Deal... Myself or officials of the Cardiff Capital Region City Deal Shadow Cabinet have had absolutely no engagement or contact from the Plaid leader over the last 18 months it has taken to arrive at the formal agreement of all 10 local authorities in South East Wales this month to support the City Deal.”

“Plaid Cymru in the Rhondda is holding an open meeting in Ferndale [with] Plaid Cymru’s leader and shadow ministers for the economy and external affairs to hear what people have to say about the City Deal and to answer questions people may have about the Party of Wales’ position on that and other economic questions. People in the Rhondda Fach feel let down and left behind by the Labour-run council.

“They’ve done little to improve the Rhondda’s economic fortunes to date. Since Leanne was elected as Assembly Member for the Rhondda she has embarked on a series of engagement events designed to listen to local people’s views on topical matters so that she can take effective action on their behalf.
“The lack of economic opportunities is a key issue that people keep raising, for understandable reasons. We in Plaid Cymru have many questions to ask about the City Deal and it is our job as the main opposition party to scrutinise public spending.
"People want to know what people in the Fach can expect to get out of the City Deal investment. We hope this meeting will enable more people to learn about it and what they can do to help make sure that investment benefits their communities.”

“You would not normally hear me compliment the Conservatives, but because they recognise the huge opportunity the City Deal presents to transform the economy of South Wales, they have engaged in the process throughout; not even a single email has ever been received from Ms Wood or a request to meet with me as chair of the Shadow Cabinet or even with City Deal officers. "I have not even heard any public backing for the deal, which aims to create 25,000 new jobs, from the Plaid leader, so I fail to see how Plaid can answer any questions on the matter.“The City Deal is all about spreading the investment, both from the public and private sector currently around our capital city, across the region; Plaid are suddenly jumping on the bandwagon because they see Labour local government leaders have delivered this huge opportunity which will provide the necessary step change the Valleys economy needs and they have played no role in setting this vital agenda...“My door is open to brief Leanne on what the City Deal is about, how we have achieved it and how we as leaders, working with Welsh Government Ministers intend to deliver for the region.”


Which seems to  me to say that if Plaid or any one else were to get involved in his is what with any consultation , it would consist of being told this is what we are going to do so accept.

interesting discussion tonight on the City Deal in Ferndale. There has been little information available to people to date. From what is available, it looks as though the Rhondda Fach isn't on the Metro map. With no rail line, how will communities in the Fach benefit from this investment? It was great to welcome our special guests - Plaid Cymru shadow ministers Steffan Lewis and Adam Price, who gave us some good insight and economic expertise on the issues. It was also good to see former Ferndale boy Professor Calvin Jones, who brought some thought provoking points to the meeting, as usual. Thanks to everyone who attended. It's vital that we all now make our voices heard so that people in the Rhondda can make the most of the opportunities that could arise with this investment. If you'd like to be kept informed as to developments and our work on the city deal, please send me your e mail address and mark the e mail "City Deal".

During a husting at the last Assembly Elections Mick Antoniw the Lanour Candidate and eventual victor in formed us that the much vaunted Metro would see a Train Station being built in in Llantrisant , which led to some to imagine one appearing in the Town rather than a few miles away .

Indeed when pressed he admitted that it may not be an actual Train service, but some other form of transport. 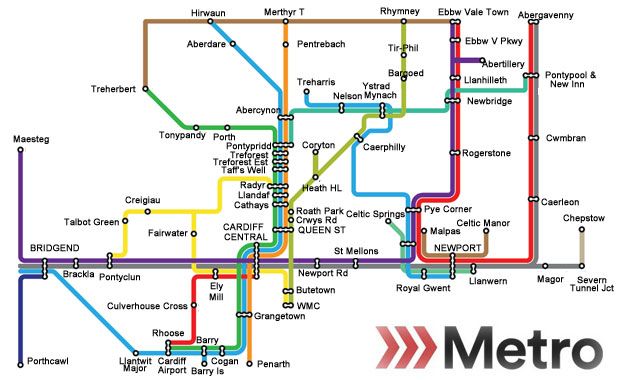 and yes neither the Rhondda Fach or Llantrisant are on it.

It is an interesting. Should you add legitimacy to a project by getting involved in some capacity even if you believe , that you are going to be ignored.

After next May Plaid may well have a lot more councillors in area of the proposed City Deal , so they will have to come up with a united front on any limitations that will undoubtedly unravel.

If Labour were to lose control of some Councils particularly Cardiff , then it may have to drop the arrogant assumption that its current hegemony in South East Wales gives it carte blanch to decide on everything .