I suspect the Welsh Media have looked at the  row over the decision to change a primary school to Welsh-medium education and in found   that the majority of residents support the decision and that is why they have failed to cover the story in depth
BBC Wales have coverd the news that the Labour party has said a member has been suspended after the
Carmarthenshire council voted in January to drop the English stream at Ysgol Llangennech, near Llanelli.
Labour said Michaela Beddows, who campaigned against changes at the school, is suspended while the party investigates.
But Ms Beddows has since told BBC Wales she is not a member of Labour.
Plaid Cymru's Jonathan Edwards wrote to Jeremy Corbyn claiming Labour members had been campaigning with UKIP.
He accused Labour members of sharing far-right material on social media, but said it was not "one individual" and called for more members to be investigated.
Ms Beddows spoke to BBC News about the council's decision on Ysgol Llangennech saying there was "no such thing as democracy in Carmarthenshire".
The Labour party said she had been suspended as a member, but did not reveal the reason behind the decision.
If however you really want the nitty gritty then I suggest you turn to Y Cneifiwr cover of the issue and look here for information.


It is ironic that a Plaid MP found it necessary to write to the Labour Leader Jeremy Corbyn in Westminster to complain about Labour member coseying up to Ukip and supporting fascist Tweets .

Of course with both the local AM Lee Waters and MP Nia Griffiths seeming  to side with the Ukip-Labour campaign in Llangenech to attack the  move by the council which is supposed to be part of the Welsh Labour Governments claim that they seek to almost double the number of Welsh speakers to one million by 2050 which was unveiled by the first minister at the National Eisteddfod. You think that it would be the "Leader" of Welsh Labour Carwyn Jones who would step in but alas no.
Indeed it appears that elements of the Labour Party have decided thta it is time to revive the old Anti-Cymraeg rhetoric in order to stop Plaid making gains in the May election.
Llangennech being probably the sought of seat they would be aiming to gain.

Some of the Ukip-Labour alliance have claimed they will be standing for the latter in the ward next year.

Which may explain the sort of poster campaign inthe village. 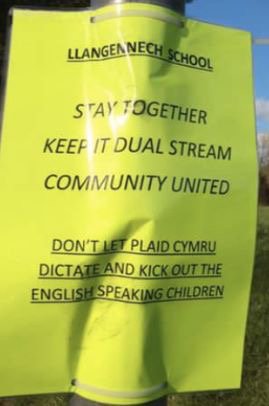 I’m not a political person or a Plaid Cymru member, I’m just a parent in Llangennech and I have to say that I’m relieved that this is coming to an end at last.The local Labour party have bullied and silenced us for months. Door stepping, pressure, waving petitions in our faces, threatening us when we didn’t want to sign them, trying to make us feel like traitors while they go all over the tele and radio pretending that all of Llangennech is against these changes. They’ve been disgusting and intimidating. As a Llanegennech parent, I never asked them to speak for me and I know my friends didn’t ask them to either.


Substitute  Race or Religion for the sort of language used by the Ukip-Labour Alliance  in llanelli and the "Liberal"  Media would be exposing it in lengthy Editorials.

But this is Cymraeg  and alas Labour can safetly  cosy up to Ukip and attack  the actual policy of their own party because it appears to be a weapon against another party.
Posted by glynbeddau at 10:28

Yes if the malevolent forces instigating this manufactured 'row' were hoping to gain wall to wall coverage in the welsh media as a result of their extremely dubious activities they were (thankfully) very much mistaken. There's a lot more support for the welsh language across Wales these days than there was in those dark times when the wife of a leading welsh politician could get away with outrageous allegations about children being prevented from going to the toilet unless they asked to in welsh.

On a related note revealing to see from this blog that the same ukip staffer who has recently been carrying out 'research' into cymdeithas appears to have been in the thick of events in Llangennech too.
https://ygwladgarwr.wordpress.com/2017/02/17/michaela-beddows-llangennech-labour-and-the-ukip-connection/

Labour in Llanelli appear to be well and truly implicated in this sorry mess.

Their local AM has clearly given tacit support to Labour member behaviour by only giving an extremely weak 'be careful' warning about involving UKIP.

Surprising really, when you consider the varied and dubious reasons given in the period before the Labour leadership contest for refusing membership of the party.