I must say I have been taken aback with number of Twitter Posts in which people have claimed that the response of the various legislatures during the  Corana-19  virus  has shifted them towards Independence
It may have been expected  that the wind may have been taken out of the sails over the movement after a series of Independence Marches saw high attendances  but YesCymru found that it has  to postpone marches in Wrexham on 18 April, Tredegar on 6 June and Swansea on 5 September due to the pandemic.
Over 500 people have joined YesCymru in the last 5 days,” a spokesperson from YesCymru announced. “A massive thanks to each and every one of you!”

The cross-party campaign which fights for Welsh independence was believed to have around 2,500 members before the current rise.
These are some typical tweets over the last few days

Any Chance of the Referendums?
@TafftheVoice
·
9h
After the Brecon & Radnor by-election last year, I optimistically joined the Lib Dems. To lend my support in fighting Brexit. That didn't end well. So today I joined
@YesCymru
. Because I'm angry, and my country doesn't have to accept this anymore. And I'm displaced in M33!
7
17
156
Vaughan Williams

Mark Riley
@Africanbluebird
·
May 27
I've officially joined
@YesCymru
. It's time #Wales to break free from Westminster & determine our own future. It will be tough & our current Assembly is far from perfect. But we can & should do this. A progressive, outward looking, welcoming, innovative self determining Wales. 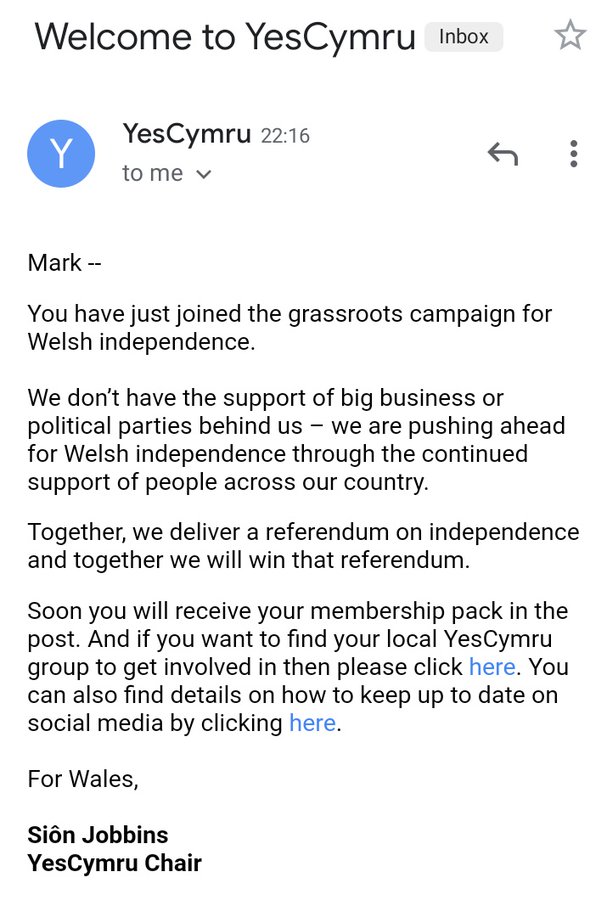 @matthew_wyn
·
9h
I've been in favour of Welsh independence for some time and now I've officially joined
@YesCymru
Change is needed for a better Wales, It's time that Wales is handed back over to the Welsh

Is there a potential tidal wave here, clearly the number of people joining has encouraged others to do so, how long this will continue

Oh and the numbers have just gone up as I have just joined.
Posted by glynbeddau at 06:24