Why not have Caroline Lucus as caretaker Prime Minister?

I have been posting  on this Blog in disrepair, that a No-Deal  Brexit in October looks inevitable and even if it was prevented the division that exist will not go away.

Indeed  a referendum  might have a Remain option but it will just see the two sides swap and Leave perpetuating a stabbed in the back mentality which will see them being entirely led by the Far  Right.

That is pf course no reason to surrender and allow a NO-Deal to go through, and there is a strong argument  that the Far Right will dominate after Brexit and seek to push the blame   for the economic disaster on everyone but themselves.

Consider Monmouth Tory David TC Davies tweeting that the  Labour leader Jeremy Corbyn call that d the UK government had "no mandate for no-deal" and he would form a "time-limited" government with the aim of calling a general election  was like "a coup d'etat of the sort favoured by Marxist dictators in banana republics from whom he draws inspiration".

With just 247 out of 650 MPs Corbyn’s attempt to become “temporary“ PM almost amounts to a coup d’etat of the sort favoured by marxist dictators in banana republics from whom he draws inspiration. 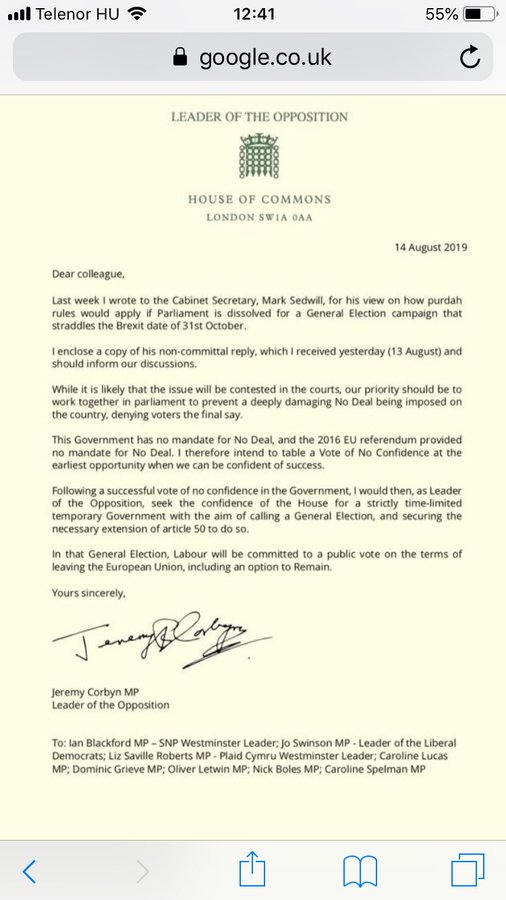 62 people are talking about this

Mr David TC (Since when has been using TC) Davies, seems to forget that his party does not have a parliamentary majority and relies  on bribing the Democratic Unionist  Party for support.

A change in government  is not unconstitutional if happens without  a General Election and  Mr Corbyn's plan has merit .

Though I think that it would have more chance if it was led by someone other than the Labour leader and whereas  Harriet Harman  may be unacceptable  to the left in Labour, the other  option Kem Clark might.

Liberal Democrat leader Jo  Swinson rejected Jeremy Corbyn's proposal that he should be caretaker PM if he wins a vote of no confidence in Boris Johnson's government.
She said the Labour leader did not have enough support from MPs though this may be because  she does not want the Liberal Democrats  to lose momentum  in their claim to be the largest Remsin Party. They are not  by the way.
Mr Corbyn said he was "ready to serve" as PM if the government collapsed.
Speaking on a visit to Machynlleth, Powys, he said he was "disappointed" by Ms Swinson's response to his plan, adding that he hoped she would "come round" to it.
Asked if he could support Mr Clarke or Ms Harman as an interim prime minister, Mr Corbyn said: "Under normal constitutional processes in Britain, when a government collapses, the leader of the opposition is called on to form a government."
It was "not up to Jo Swinson to decide who the next prime minister is going to be", he added.
Ms Swinson put forward Mr Clarke and Ms Harman - who are the longest-continuously serving male and female MPs - as potential caretaker prime ministers, saying they were both experienced and command respect across Parliament.
"I have been in touch with them because obviously you don't just mention people's names without checking that they're OK with that," she told BBC Radio 4's Today programme.
"They put public duty first and they don't want to see a no-deal Brexit," she added.
"If the House of Commons asks them to lead an emergency government to get our country out of this Brexit mess and to stop us driving off that cliff to a no deal, then yes, they are prepared to do that."
Mind you if bothe Mr Corbyn and Ms Sinson  were serious then it would be better to seek a caretaker PM from  another party.
The real choice should be  Caroline Lucus  of the Green Party  who I think would put the  future of these Islands first .