Angela Burns AM on Independence is like listening to King Herod on future child care.

Plaid supporters may be have mixed feelings about the latest attack from the  "Welsh" Conservatives and the following appearing on social media.


Welsh Conservatives
@WelshConserv
·
20h
The so-called 'Party of Wales' are pursuing the unpopular prospect of independence and want to force our country to vote again on #Brexit. Time for a name change? Only

@WelshConserv
will fight for #Wales 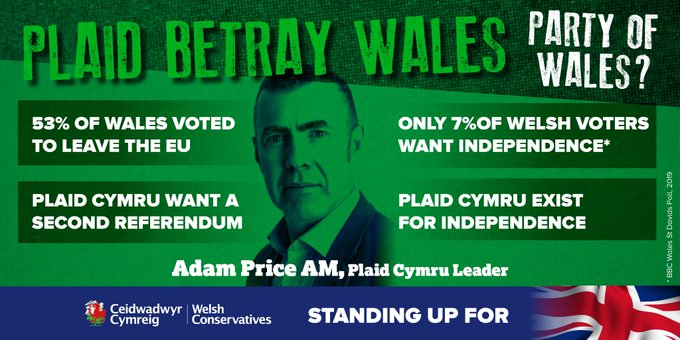 It clearly show that the Tories are worried about the growing support for Independence , but using language like  " Betray Wales" is dangerous  they would also complain loudly if the role was reversed and Nationalists or Independistas claimed that Unionists were betraying Wales.

@AngelaBurnsAM
wrote about why the #NHS would bear the brunt of #Welsh independence. Read it on Facebook via the link

will stand up for the #Union

There’s been a lot of talk recently about Welsh independence.


This has, no doubt, come about from relentless reporting on the usual anti-Brexit comments of Welsh politicians from left-wing parties and small gatherings of pro-independence campaigners – even if they’re in places where one would expect such support to be high.
However, this flirtation with independence is dangerous and anti-democratic, bordering on a dereliction of duty from those who discuss it. The so-called Party of Wales are already having trouble accepting one referendum result that didn’t go their way. How can we be sure they won’t do an SNP and continue calling for another – as they are with Brexit – until they get the right answer?
This is anti-democratic because we are talking about an issue that distracts from scrutinising the Welsh Government within our existing system of self-governance. The consequences of this is ignoring the issues voters actually do care about.
The more we talk about the divisive, baseless, and impoverishing prospect of Welsh independence, the less attention is given to our broken education system, unfair local government funding settlements, and forgotten farming industry.
Most of all – probably after wanting to have the Brexit they voted for implemented – Welsh voters want attention focussed on health services. In the last week, I have read in this very paper about A&E patients facing waits of up 17 hours in ambulances because they couldn’t be handed over to hospital staff.
There was also a piece on A&E departments in Wales. I’m sorry to those reading this in Swansea, Bridgend, or anywhere in North Wales, but the Welsh Labour Government have overseen the atrophy of your hospitals, leaving you the worst served in an emergency.
Now, I am not going to write that these failures are happening on purpose and that they can be halted at the snap of a finger. Indeed, NHS staff work tirelessly to deliver quality services for us patients. But they’re being let down by the directionless Labour Health Minister who suffers from a poverty of imagination, inability to correctly prioritise, and, worst of all, take accountability for several severe failures.
But what I will say to those who think that independence for Wales will solve these problems is that you are selling a lie if you tell anybody the NHS in our country will be better served if we are to break ties with the most successful Union in history.
I will illustrate this through one aspect of the success of the partnership that underpins our United Kingdom: Wales generates less money in taxes than it get back from the Treasury. Indeed, the fiscal gap is £13.7bn – £4,380 per person – and whereas the UK deficit is 2%, for Wales it is 19.4%. Independence would demonstrably make Wales poorer as it would have to borrow one-in-five pounds it spends now.
And because of the way the UK funds Wales, for every £1 spent in England, £1.20 gets sent to the Welsh Government. The formula by which Wales is funded guarantees that a Welsh resident gets more in public spending than a resident in England. Indeed, that’s why after Boris Johnson announced a cash injection of £1.8bn for the NHS across the border, £110m will be sent here.
And this is just the funding part. But if you think independence will change the geography of Wales, the distribution of its people, the inability to attract more medical staff, health board governance problems created by decisions already made in Wales, or create technology that would improve healthcare, you are demanding a miracle.
Despite this, Welsh Labour politicians are flirting with independence, while Plaid Cymru exist to facilitate it. If they continue, they can’t be trusted to look after your pay packet, your Welsh Government, nor your public services – and that includes the NHS.
Only the Welsh Conservatives will stand up for Wales’ place in the Union and protect the strength we derive from it. We are stronger together and so is our NHS.

Angela Burns AM is the Shadow Health Minister - she was writing in the Western Mail, 19th August 2019.

It is a a interesting point but seems to be based on the current devolution settlement where the NHS is the main recipient of the pocket money from Westminster and having a Tory warning about such things is like listing to an announcement of by King Herod on future child care.

If Wales was such a drain on the Union as it is often claimed , there would surely be  a call from English politicians tom wave us goodby.

In a week where the Tories are talking about increasing the State Pension age to 75 which means that a great number of Welsh People would not live to calim it. The last people we can lecture us  on a future Independent Wales' social policy are Tories  whether "Welsh" or thier london masters.