I  will leave it to  Ifan Morgan Jones  over at Nation Cymru to  refute the nonsense  that Kinnock Junior So proudly tweeted on Friday after having a piece published in the Wasting Mule .

Stephen Kinnock
@SKinnock
Nationalism is a divisive and dangerous ideology. Now, more than ever, our United Kingdom needs to stay united. Here’s my piece in today’s Western Mail, setting out why we must make the case for progressive British patriotism, with passion and conviction. 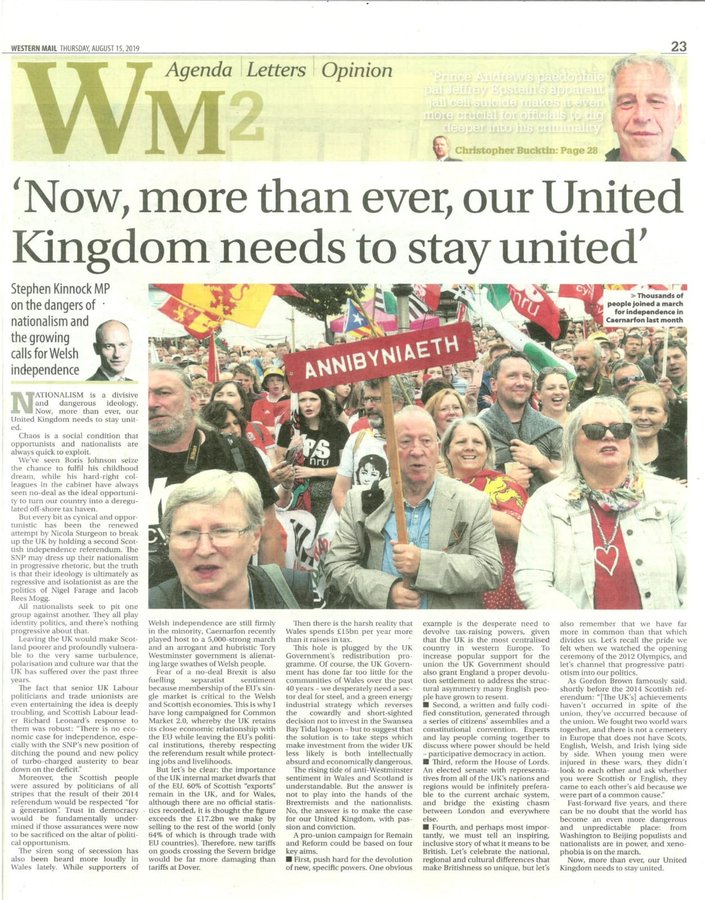 
As Ifan points out it doesn't seem to be on line, and with just 14 retweets  and 28 likes on Twitter, Kinnock Junior  does not seem to have garnered much support  and the retweets may well be of those who wished to attack his nonsense.


I must say however that  how Kinnock Jr who has been sitting for the last 3 years in a the House of Commons watching British Nationalism
manifest itself on the government benches  in the guise of Brexit and the likes of Boris Johnson and William Rees Mogg is beyond .


But then Stephen Kinnock, Jr who heads a group of around 30 of fellow party members called Respect the Results, which, as its name implies, is opposed to a second referendum, has said that he and his political allies are considering a "radical and dramatic intervention" in Parliament to prevent both no-deal and a second referendum, which has support from Labour. So maybe he has more in common with the Prime Minister than his own party.

His face on seeing the exit poll on the night of the General Election  when he clearly was hoping that a Corbyn led Labour Party (His Party) would be annihilated is both telling is priceless.

Kinnock Junior may have huge ambitions to be  a government minister one day , but he hasn't even the talent of his father  who lost an election to poor old John Major.

I even wonder why I am bothering about such an irrelevance.

We should ask his wife (former prime minister of Denmark, Helle Thorning-Scmidt) if she's in favour of Denmark becoming a German Land.