PM Johnson may well be preparing for an Orgreave response.

It could well be that one of PM Johnson first  pledges to deliver 20,000 new police officers is just a populist gimmick.

He has done it before as Lord Mayor of London but although there are claims he can't be trusted to deliver his promised 20,000 new police officers there may be a more sinister agenda from the Prime Minister as his No Deal Brexit  threatens an economic disaster and civil unrest
.


Shadow Police minister Louise Haigh said Mr Johnson had made similar promises while he was Mayor of London - but force numbers fell on his watch.

"When it comes to policing, Boris Johnson simply cannot be trusted. He served in a government which promised to protect the police, then voted for brutal real-terms cuts."As mayor of London, he vowed to recruit thousands of officers, but police numbers fell on his watch."The damage caused by these broken promises and brutal cuts cannot be reversed and the know-how that thousands of experienced bobbies brought to the job is gone for good - at a time when we've never needed it more."


However Johnson  Johnson as London Mayor  t the crowd-control vehicles from the German police in 2014, in anticipation of social unrest, without checking whether they could be used on London’s streets. In one of his most humiliating episodes as mayor, the then home secretary, Theresa May, banned them from use anywhere in England and Wales. It left the capital’s taxpayers with three expensive white elephants. 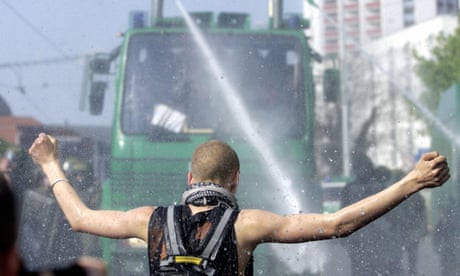 Too big, too dangerous, too costly: the faults of Boris Johnson’s water cannon

Read more
The current mayor, Sadiq Khan, pledged to claw back as much money as possible on the redundant vehicles by selling them. But after almost two years the mayor’s office admitted defeat in its attempt to find a reputable buyer.

It announced  last year that it had agreed to sell the vehicles for just £11,025 to Reclamations Ollerton, a scrap metal yard in Newark, Nottinghamshire.
The fee recoups 3.4% of the £322,834.71 spent on the vehicles since 2014.
The 25-year-old vehicles cost £85,022 in 2014, but they were found to be riddled with faults and required expensive modification to make them roadworthy. This included £32,000 to comply with the city’s low emission zone, and almost £1,000 on new stereos.
So Johnson's ( I am not going to cal him Boris)has an iron hand response to public disorder and may well seek torespond with, state violence much in the way Thatcher responded to the miners strike resulting in the he Battle of Orgreave  a violent confrontation on 18 June 1984 between police and pickets at a British Steel Corporation (BSC) coking plant in Orgreave

Following the confrontation, 71 pickets were charged with riot and 24 with violent disorder. At the time, riot was punishable by life imprisonment. The trials collapsed when the evidence given by the police was deemed "unreliable".] Gareth Peirce, who acted as solicitor for some of the men, said that the charge of riot had been used "to make a public example of people, as a device to assist in breaking the strike", while Mansfield called it "the worst example of a mass frame-up in this country this century".[15][16] In June 1991, South Yorkshire Police paid £425,000 in compensation to 39 miners for assault, wrongful arrest, unlawful detention and malicious prosecution.[13][17][18][19]
In 2015, the Independent Police Complaints Commission reported that there was "evidence of excessive violence by police officers, a false narrative from police exaggerating violence by miners, perjury by officers giving evidence to prosecute the arrested men, and an apparent cover-up of that perjury by senior officers". Alan Billings, the South Yorkshire Police and Crime Commissioner, admitted thahe police had been "dangerously close to being used as an instrument of state".