"Welsh" Labour "We don’t know what we’re doing on the economy,"

For its worth I can see the argument made by Wales' Deputy Economy Minister Lee Waters  astonishingly candid admission – that the Welsh Government has pretended for 20 years that it knows what it is doing on the economy, when the truth is that it doesn’t. in its  context , but unfortunately he does not come to the conclusion that we need full control of our economy , rather than the third rate devolution settlement we are currently working under.

According to Wales Online.


Speaking to leaders of the co-operative sector at a lunch in The Clink restaurant at Cardiff Prison, Mr Waters said:

“There’s a degree of disappointment among some people ... who feel that devolution hasn’t achieved its potential.
"For 20 years we’ve pretended we know what we’re doing on the economy – and the truth is we don’t really know what we’re doing on the economy. Nobody knows what they’re doing on the economy.“Everybody is making it up as we go along – and let’s just be honest about that. We’ve thrown all the orthodox tools we can think of at growing the economy in the conventional way, and we’ve achieved static GDP over 20 years.“The levels of GVA per head now are the same they were in 1999. And that’s not from a lack of trying. There’s no failure on the part of ministers and civil servants. Boy, have they tried!But it’s an approach that has its limits for Wales – and we need to try a different approach.”

GVA – Gross Value Added – is a variation on GDP (Gross Domestic Product), and is used to measure the average contribution per head of individuals to a regional economy. Wales, like Scotland and Northern Ireland, is seen in this context as a region of the UK.Over the last 21 years, Wales has fallen back slightly meaning economic productivity is now even further behind the UK average than it was in 1998.Mr Waters said as part of an alternative approach, Wales needed to experiment, and needed to fail, and say ‘that’s OK’: “We learn from that failure, and iterate and move on,” he said.He said the Welsh Government has set up a £3m “experimental fund”, while the Cardiff Capital Region (a consortium of 10 local authorities in south east Wales) was looking to have its own £3m fund operating in a different way, which would enable comparisons to be made.The Welsh Government would be “pump priming” through the experimental fund, which would be open to bids over the summer from the cooperative sector in areas like social care and food procurement for local schools.

“What we don’t want is more bloody pilot projects. Devolution has been littered by tool-kits and pilot projects, which then don’t get mainstreamed.“They’re perfectly worthwhile and successful in their own right, but they have their limits.“How can we hard-wire? How can we spread and scale success?“We’re looking at the public service boards set up under the Future Generations Act, which at the moment haven’t scratched the surface of their potential in my view. How can we link them to this agenda and say: ‘Right, run the risk. This is the Future Generations principles in action. Make this happen.’?“And how can we make sure that the experimental results which are throwing up success stories can be immediately mainstreamed through the delivery of public services? That’s the challenge to them.”He said that Preston in Lancashire had made a success of local public procurement, where local businesses were successfully bidding for contracts in areas like school food provision.“If they can do it in Preston Borough Council – the size of Swansea – we can do it here”, said Mr Waters.

He said there was a danger in focusing too much on inward investment and so-called “anchor companies”, when such firms could “up-anchor” and go elsewhere.More attention should be given to local firms that were grounded, and provided a foundation for the local economy, he argued.

Mr Waters also joked about his precarious hold on the Llanelli constituency, saying


:“As many of you will know, I’ve got the smallest majority in Wales, and no AM for Llanelli has ever been re-elected. So that focuses your mind about what it is you’re here for, and what you can do in the timeframe you have to work within. I’ve got 18 months to make this worthwhile, before I scuttle off and try something else to do, probably.”


In response to this article Mr Waters wrote on Twitter:

"My point is that in a rapidly changing environment, with automation and Brexit, no government in the world can claim to be in control of the economy. That's why we need to experiment, learn and scale."


"who speaks plainly and clearly and challenges the status quo to one who turns up and reads out a civil service brief".

I suppose arguing that Mr Waters is being candid is some form of defence. but it does look more like this.

Llyr Gruffydd AC/AM Retweeted WalesOnline
We clearly don't need programmes like The Thick of It when members of the Labour Government are coming up with quotes like this in real life! 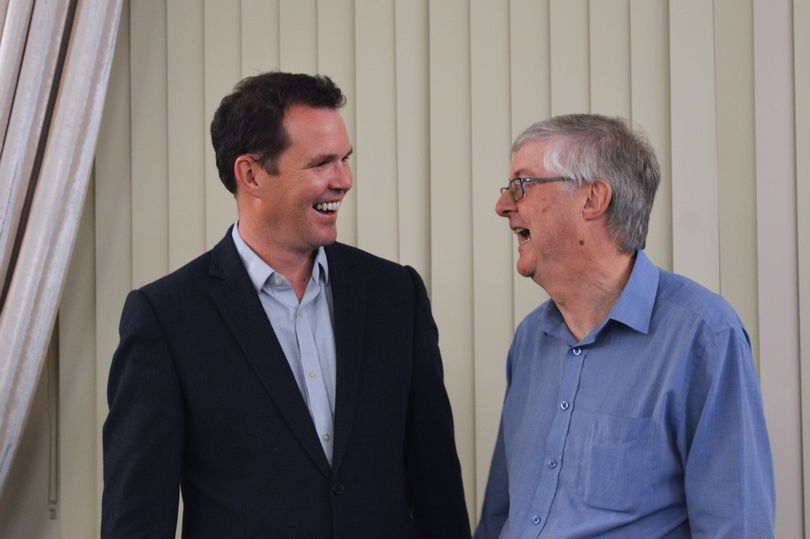 "He blames the state of Wales on economic orthodoxy. We blame it on a lack of innovation from successive Labour governments," a spokesman said.

"It's deeply concerning to hear the team behind Wales' economy being so blasé about the sorry state of our nation's economy."

"We have seen major improvements across many parts of our economy over the past 20 years but it is clear there are significant new and emerging challenges.
"We have to work differently to deal with the global shifts of increased mechanisation, automation and of course, Brexit. The old ways of doing things are not sufficient in the face of such challenges.


As long as the Welsh Economy is tied to the Pocket Money  and conditions we receive  from Westminster then whoever is in charge of Cardiff Bay are simply trying to renovate the house they live in , but landlords limit what they can do and spend.

But of course It's Our Bloody House, not theirs and until we get full control any renovation will be merely cosmetic.

Clearly this an admission that Labour have failed devolution and just as I argue this statements by Lee Waters, should  lead us to the conclusion we need Independence or at least parity with Scotland, not the third class devolution we have now there will be some who argue that it shows a case for abolition of the assembly.

What it does show is that Labour has failed in its 20 years at the helm.

Whether another Party under the same devolution settlement can make a difference is a moot point , but clearly we need to consider an alternative.