Did Wales really vote to make itself poorer.

it seems that the reward that Wales gets from voting Leave will be that we become even poorer than we are now
We are told by the Wasting Mule,

A shocking new report has exposed the difference between Westminster spending priorities and the EU's - and the impact it would have on Wales when we leave the EU.
Taking away the structural and agricultural funds that Wales gets from the EU and redistributing the cash according to Westminster's spending priorities would be the equivalent of stripping £743 from every Welsh person and giving £200 to every London, according to the study.

The report comes from a coalition of community leaders and charities called Communities in Charge and suggests Wales will lose far more money that any other area of the UK.
When we leave the EU, the funds that the EU allocates to different parts of the UK will instead be retained in Westminster.
According to the UK government these will then be allocated to other parts of the UK through the Shared Prosperity Fund. However there has been very little clarity on how these fund will be allocated.

So what does the analysis show?
The headline figures for Wales (between 2021-2027) are:
Every person in Wales will lose out on £743.11 if the UK's spending priorities don't change after we leave the EU
Wales receives 5.8% of the UK's economic affairs expenditure but 21.9% of the EU's structural funds.
Every person in London will gain £215.32
In total, Wales will lose out on £2.32 billion
Of the six other areas that lose cash, Wales loses more than all of them combined. The south west of England is the next most at risk area and would lose £1bn.
Speaking to the Huffington Post Tony Armstrong, chief executive of Locality, one of the organisations running the campaign, said: "It will be like handing every Londoner a cheque for over £200 and taking £700 from every Welsh person.”
Under this analysis, Wales is one of seven areas of the UK which would receive less funding after Brexit if the UK's spending priorities don't change.
However the losses of the south west, north east, Northern Ireland, west midlands, north west, east midlands and Yorkshire and Humber combined are less than Wales.

Recently Wales was found to be the only UK nation to see a rise in child poverty with parts of the Valleys found to have the highest rates in Wales.
Parts of Wales already struggling following brutal cuts to local services.
A recent report from United Nations special rapporteur Philip Alston, found that “austerity policies have deliberately gutted local authorities... eliminated many social services, reduced policing services to skeletal proportions, closed libraries in record numbers, shrunk community and youth centres, and sold off public spaces and buildings”.
He added: “It is hard to imagine a recipe better designed to exacerbate inequality and poverty and to undermine the life prospects of many millions.”


Wales is already  one of the poorest countries in Europe.as the map below shows 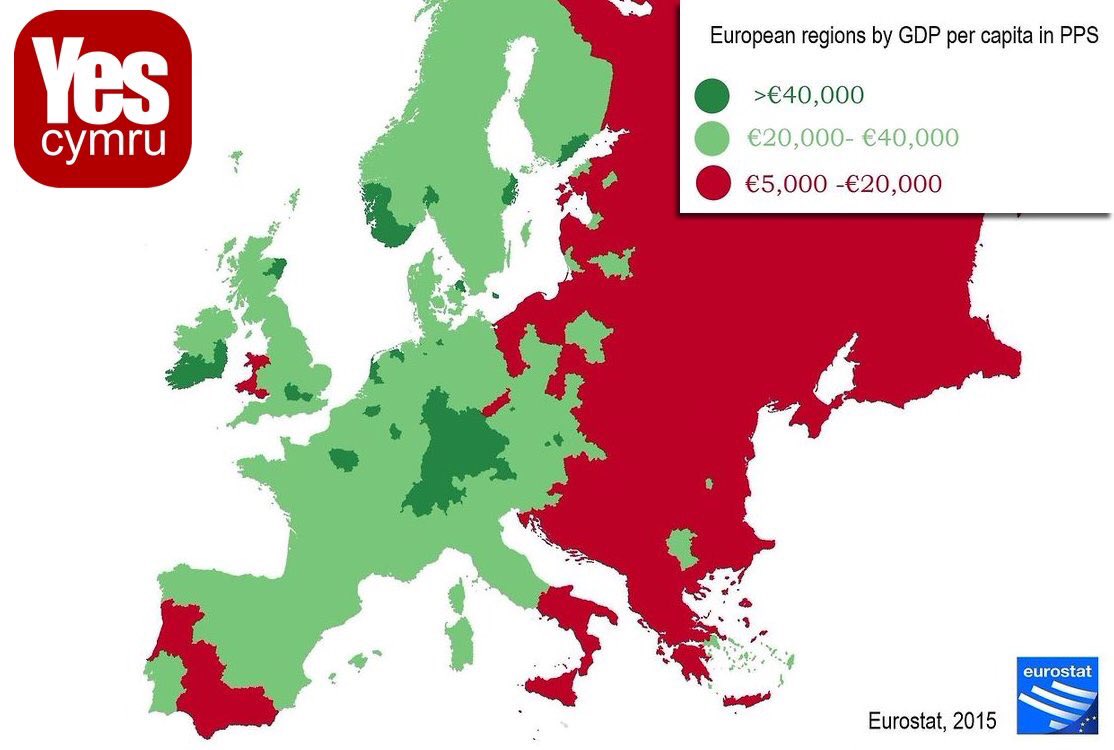 Does anyone expect Westminster  to change things ?

We have already seen thousands of jobs losses as result of Brexit, and I don't think it is a case of Project Fear to expect more.

Those in Wales who voted for Brexit for reasons other than xenophobia, really should think again .

How many that is compared to those (ironically often in areas of low immigration) is a questionable, but we are faced with not only becoming poorer, but our very existence (as Scotland inevitably leaves the UK) as a Nation is at threat.