50 years on from Trefechan bridge

Yesterday 500 supporters of  Cymdeithas Yr Iaith have staged a rally in Aberystwyth to mark 50 years since their group tried to bring the town to a standstill with its first protest.
The original intention  was to put a few posters up on the local Post Office was actually the very first act of non-violent direct action but were quickly to realise that this was not going to stir things up .
So members of Cymdeithas sat in the middle of a main road in the town across Trefechan bridge 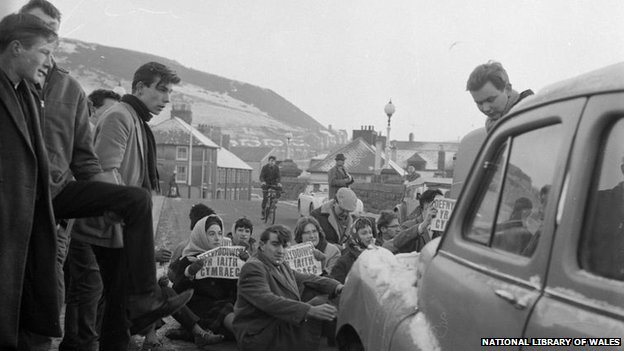 Since then have seen Cymdeithas Yr Iaith have  probably seen more people funded and imprisoned than any civil rights movement since the Suffragettes
Their campaigns have resulted in many improvements in the status of the Welsh Language.
Including
Bilingual Forms
Bilingual Road Signs
Radio Cymru
S4C
Bilingual Signs in some of shops and Supermarkets.
All these would not have been achieved with out the sacrifice of young people some of who gave up their liberty in order to achieve the above and more.
The sad thing for me is that if this had been happening outside the UK they would have received support from all of the British Liberal-Left.

But often they are attacked from the very people who shout about the rights of indigenous people in South America for instance.
Just as you didn't need to be Black to support Martin Luther King and the Civil Rights movement in the USA particually in the period 1960 to 1968.
You don't need to speak Welsh or even live in Wales to back the Welsh Language.
If you live in Wales and fail to learn the Language ypu could make sure that the next generation need to.
Some argue that the era of  Cymdeithas Yr Iaith and direct action is over and the major battles have been won,
But the latest Census result have shown that bilingual forms and signs will not be enough to save the Language and we ned action now.
Let's hope that 50 years latter on Trefechan bridge in Aberystwyth a new generation will be inspired to fight that the Welsh Laguage not on only survives in Aberystwyth and Ceredigion,  but grows throughout Wales .and aim to make the next generation fully bilingual .