Two Cock Ups already: And we haven't had the opening Ceremony yet.


Not a great Start for the Olympics Organisers


A Cock Up on the opening day withs a row with North Korea after the South Korean flag was mistakenly displayed prior to their women's football opener against Colombia at Hampden Park in Glasgow. 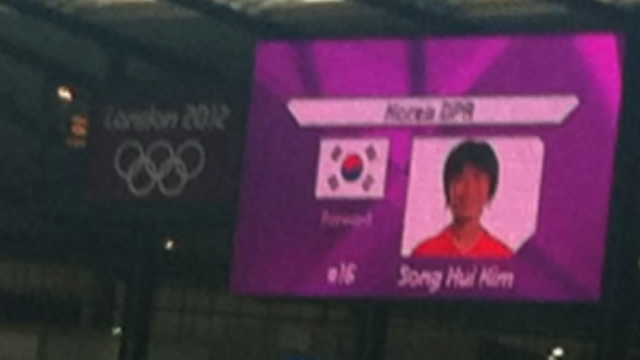 Particularly as South Korea are not even competing in the women's football tournament.


Relations between the two countries is tense, and they are technically still at war as no peace treaty has ever been signed following the Korean war from 1950 to 1953.


The team walked off the pitch in anger and only returned to start the match with Colombia an hour later.


"North Korea's women footballers may have felt they had to "make a fuss" over last night's Olympics flag mix-up - for fear of being sent to the gulag if they did no"t.

Quoting  Dr Foster-Carter, honorary senior research fellow at Leeds University, ( you can find amn accademic anywhere to back you)  as saying


"If those footballers had not made the sort of protest they did, they would have a risk of questions being asked when they got back home and perhaps being taken to a not very nice place."

Why can't they simply accept that any player would feel insulted  if another flag had been shown alongside their not which was not their own.


What would the Torygraph attitude be if the Argentinian flag was shown alongside an English Player.


BBC Scotland understands the video package was sent from London and Hampden organisers had no input.


Prime Minister David Cameron said it was "an honest mistake".


No it was an embarrassing Cock up and surely when it comes to North and South Korea the mantra should always be don't mess them up.


The second  Cock Up was , Team Great Britain getting  the nationality of one of its own athletes wrong. In the official Team GB program for its opening men's soccer match against Senegal on Thursday, Joe Allen was  wrongly listed as being English.

The 22-year-old Allen, who also plays for Premier League club Swansea City, has represented Wales at both the youth and senior levels prior to being included in Team GB,  The other four Welsh players on the first GB soccer team to compete since 1972 had their nationality correctly listed (see Craig Bellamy in the above image) in the program.
Are Team GB the only side to have the nationality of their players in the programmes? It would seem odd if it was s a Brazilian playing for Brazil or perhaps  the Nationality of a New Zealand Player given as Samoan and with the eligibility rules I suppose the latter could be an example of many
As Fifa states
Any Player who ... [assumes] a new nationality and who has not played international football [in a match ... in an official competition of any category or any type of football for one Association] shall be eligible to play for the new representative team only if he fulfils one of the following conditions:
(a) He was born on the territory of the relevant Association;
(b) His biological mother or biological father was born on the territory of the relevant Association;
(c) His grandmother or grandfather was born on the territory of the relevant Association;
(d) He has lived continuously for at least five years after reaching the age of 18 on the territory of the relevant Association.
So maybe they are but you still need a passport from the country you are representing so you probably be listed as that nationality.
Two Cock Ups and we haven't had the opening ceremony yet . I imagine there's now frantic  checking of the Information before they are displayed.
Both are inexcusable: Both where sensitive issues  lets hope there are no more.
Posted by glynbeddau at 07:48