It probably says more about the Labour Party leadership when the only policy they seem to have come up with that has rattled the Con/LibDem Coalition is ED Miliband's plan for a two year freeze in fuel bills.

The Coalition has been on the back foot over energy costs since Mr Miliband's announcement at his party conference in September that he intended to freeze prices for 20 months if Labour wins the next general election in 2015.

So from early next year the cost of the Energy Company Obligation (ECO), an insulation scheme, will be reduced in a move that should shave £30 to £35 from bills.

There will also be a taxpayer-funded £600 million rebate on the Warm Homes Discount, which helps those in fuel poverty, saving customer another £12 on average. 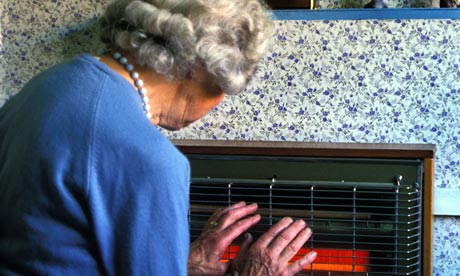 Yippee. But of course it not money taken of the Energy Suppliers its a form of direct taxation transferred   to indirect taxation.

However the Coalition government will son be able to say that they have reduced the number of people in fuel poverty at a stroke.

By  simply change the definition of what being poor is.

The coalition government has been accused of "shifting the goalposts" to bring down the number of households classed as living in fuel poverty.
Amendments to the Energy Bill would change definitions so that 2.4 million are classed as fuel poor rather than 3.2 million.
Bloody clever
But to me one thing is clear. When this is the only issue that the government is forced to take action on, (even if it is by "shifting the goalposts") by attacks of the main opposition we are not only living in fuel poverty but political poverty.
One idea from the Labour Leadership that has resonated in the media that has worried the coalition just one and only 18 months to go to the next election.
And it wasn't that brilliant a two year freeze and then what A massive hike by the companies?
When it is the poorer in our society who have suffered worst from the Coalition Cuts . Ed Miliband has chosen a safe battleground, But is it not time he started defending those who are being maligned by the Coalition and Media or is he scared of the taunts from Cameron that he leads the "Welfare Party".
But then there no easy votes to be gained by doing this is there. So we have an opposition that offers nothing the poor and dispossessed preferring to appease Tory voters in marginal seats in the South of England  rather than those who have always voted for them.

In the Guardian on Saturday Kevin Mckenna attacked the The poverty of the Better Together campaign. His final words can be used throughout the UK but if I was Leanne Wood I would use them as a basis fo the  in the next election.

"There are many reasons why Better Together would never dare to produce its own white paper entitled "Britain's Future". For how could any Scottish Labour supporter subscribe to a document that would talk of penalising the poor; cutting the taxes of the rich; allowing our defence and intelligence policies to resemble those of Texas and re-introducing a light touch for bankers? Not to mention leaving Europe and telling immigrants to go home".