Reverse ferret is a phrase used predominantly within the British media to describe a sudden reversal in an organisation's editorial or political line on a certain issue. Generally, this will involve no acknowledgement of the previous position.

The term originates from Kelvin MacKenzie's time at The Sun. His preferred description of the role of journalists when it came to public figures was to "stick a ferret up their trousers". This meant making their lives uncomfortable, and was based on the supposed northern stunt of ferret-legging (where contestants compete to show who can endure a live ferret within their sealed trousers the longest). However, when it became clear that the tide of public opinion had turned against the paper's line, MacKenzie would burst from his office shouting "Reverse ferret!"[

Apparently the collective noun for Ferrets is apparently a Besynes .

So there are a huge Besynes and there are a Busyness of Tory MP Tory MPs both Welsh and English who are reverse Ferreting after Boris Johnson took England into a Month lockdown , after they constantly  attacked Welsh First Minister Mark Drakeford for his 17 day Firebreak. 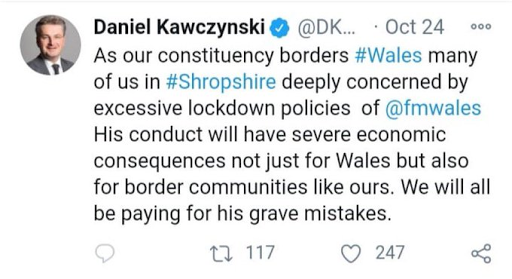 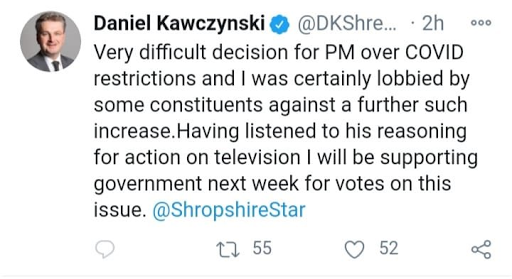 Andrew RT Davies
@AndrewRTDavies
·
Oct 31
A number of people on my timeline screaming about England this morning, which is strange given I’m an elected Welsh politician. I stand by my view that the two-week lockdown implemented across Wales was disproportionate and unnecessary for certain parts of our country.
214
86
135 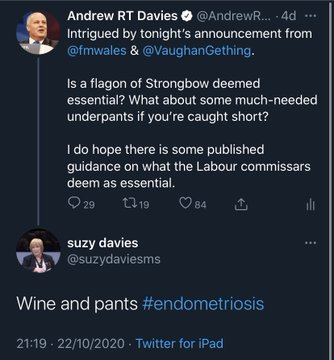 You may have a problem finding RT Davies' strongest and more inaccurate Tweets but some remain. 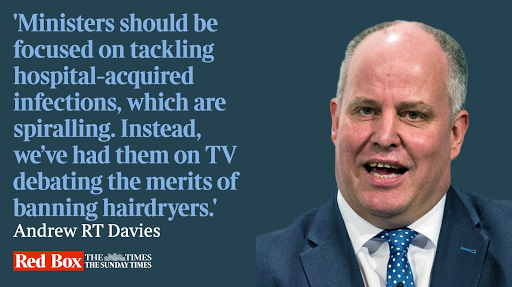 Have a look at his Twitter Feeds and ask yourself why his criticism of the Welsh Government  swwms to be more mooted.

Here's sudden convert to lockdowns,Andrew RT Davies, on the official Welsh tory website recently opposing them in Wales - stating they were based on 'discredited data' and been 'written on back of fag packet' 🤔 https://www.conservatives.wales/news/lockdown-decisions-wales-based-discredited-data-shadow-health-minister-comments